Live Science recently published an infographic showing the 10 states that have reported the most UFO sightings using data from the National UFO Reporting Center (NUFORC) in Seattle. I updated my MUFON spreadsheets for a recent article in order to analyze a spike in UFO sighting reports from this past August received by the Mutual UFO Network (MUFON). With the data already at my fingertips, I decided to also take a look at how MUFON's data stacked up to NUFORC's. I took it a step further to refine the data and deduce where the true hotspots can be found. 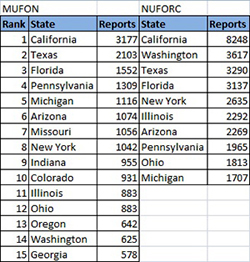 Although MUFON has been around since 1969, the data I have is from their online reporting website, which was only started in mid-2006. Some of the old paper files have been imported into the online database. Even though NUFORC, which began in 1994, is a one-man show run by Peter Davenport and headquartered in an abandoned missile silo, up until recent years he used to receive more reports than MUFON. Now MUFON, with thousands of members and hundreds of certified investigators all over the country, receives around 500 sightings per month, although there has been a recent increase.

The top states for both organizations are very similar. NUFORC rates Washington higher, possibly because it is his home state where he receives more press, and likewise MUFON HQ in Colorado is rated higher than it is in NUFORC. More press typically means more people know about you and you get more reports. In the table I list the top 15 for MUFON, so you can see that the states ranked in NUFORC's top 10 that are not in MUFON's, still rank high for MUFON.

Curious about where the UFOs are right now, I analyzed the 2011 MUFON data further. If we look at the top 10 states by the number of reports they have received, there is very little difference than from the overall numbers. However, does this really show where the hotspots are? In order to examine this further, I looked up the most recent census data from April of 2010. The data indicated that for the most part, wherever there are more people, there are more reports. In order to find out where the true hotspots are, I decided to calculate where there are more sightings per person. The "per Pop" number in these tables shows how many UFO sightings there are per 100,000 people.

The listing changes quite drastically for some states. California, who used to be top dog, falls all the way to 23 when ranked by population; Texas and Florida fall even further. North Dakota, Arizona, Colorado and Alaska come to the top. However, some of the states that make it to the top have only reported a handful of sightings. In statistics class we learned to throw these small samples out, because they are not statistically valid, at least that is what I remember and I did get an "A" in the class. Doing this, we get the top UFO hotspots per Alejandro. These states are the ones that I feel have enough reports to truly make the data more accurate, and frighteningly enough the state I live in now jumps to #1 and my home state #2. I guess I should be seeing more UFOs. Considering there was a large spate of UFO sightings the year I was born, I sometimes fear my parents were visited by a UFO instead of a stork.

So what does all of this data tell us? Well, if you want to see a UFO or even meet an extraterrestrial, your chances might be higher if you move to some of the states in this last list. However, if you don't want anything to do with UFOs, or if you think ETs are gross, move to Mississippi or South Dakota, they were at the bottom of my list.

Visit this link to see more analysis and graphs on UFO hotspots.