UFOs and ETs were on tap this weekend at the 42nd annual MUFON Symposium in Irvine, Calif.

Throughout the symposium, one individual showed up at all of the lectures whose presence may have struck fear in the hearts of many of the UFO believers.

"I think there's no evidence that UFOs represent anything outside of science that we know now," said Robert Sheaffer, one of the world's leading UFO debunkers. "There's no such thing as an alien intelligently controlled vehicle that's zooming around in the vicinity of the Earth now." 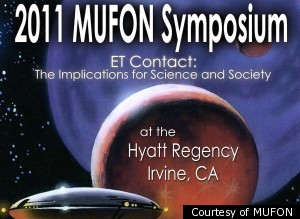 "Some people say, 'Well, maybe they're time travelers or they're from the fourth dimension,' or something, but again, those are pretty drastic hypotheses and you have to have drastically strong evidence to claim that that is true," Sheaffer told The Huffington Post.

With more than 3,000 members, MUFON -- the Mutual UFO Network -- is the largest UFO investigative organization in the world, represented in all 50 states and 25 countries.

"The first 41 symposiums focused on trying to prove to people that UFOs were real, that they did exist and there was physical evidence to support that," said MUFON board member Jan Harzan.

"What we’ve tried to do this year as a group was to look at this question: We know ETs are out there -- we can argue about whether they’re here or not. What will happen when Earth comes in contact with an ET race?" Harzan added.

The overall theme of the other-worldly symposium was "ET Contact: The Implications For Science and Society." To that end, a roster of speakers offered answers and opinions, sometimes openly disagreeing with each other. 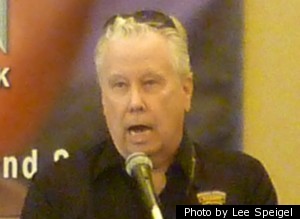 At the symposium press conference on Friday, I threw out the question to the speakers about this whole notion of disclosure, where some people claim secret UFO information has already been released, while others argue otherwise.

"President Harry S. Truman, on April 4, 1950, said at a press conference, ‘UFOs are real and they’re not from this planet,’" Alexander said. "In the the headlines of April 5, 1950, you don’t even find UFOs mentioned, so the idea that this was going to be a big breaking story just wasn’t true. After that ... we’ve had presidents around the world, and any number of governments that have dumped, basically, all of their files. I’m not sure how many times you have to be told this is real before we’re willing to accept that it’s real!" 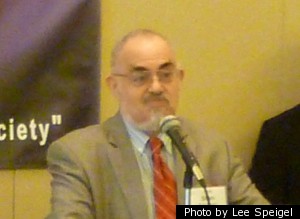 "I would take issue with that strongly," nuclear physicist Stanton Friedman quickly countered. (Image left) "Because all the stuff that’s been released so far by all these governments releasing their files is not top secret material. There’s no indication that the top secret code word stuff has been released, and I’ve never been able to find evidence that Truman actually said that -- I’ve seen that claim made, but I checked at the Truman library and they have no record of there being a press conference at which he said that."

Chiming in on this heated debate was former astronaut Story Musgrave, the keynote speaker at the symposium, who doesn't believe aliens have ever visited Earth.

"I'm totally honest and from the heart, I've got no agenda and I'm not running for election," Musgrave told The Huffington Post. (Image below right) "NASA and no one ever muzzled me or anyone else. They have absolutely no secrets, except for classified missions. Otherwise, we're free to say it as it is." 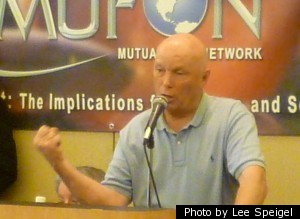 "If we reject (extraterrestrials), they're not coming here," he added." They're not going to come to a home that rejects them. So I think it's very important to accept them and welcome them."

On the subject of other astronauts who have claimed to see UFOs, Musgrave is very adamant.

"No astronaut -- and I queried everyone, hundreds -- was able to bring to me an experience which passed my filters."

Included in the weekend MUFON event was an eight-hour field investigator training course to help people learn some of the finer points of how to look into UFO reports wherever they occur.

And, as one might expect, just about everything ET-related could be purchased for a price: alien statues, posters, T-shirts, mugs, flying saucer-shaped rocks, artwork, books, DVDs, crystal skulls, pendants, jewelry -- all in the spirit of out-of-this-world consumerism.