At the 2012 International UFO Congress in Phoenix, Arizona, retired Chilean General Ricardo Bermudez discussed the results of a remarkable multiple-witness UFO case. The UFO was spotted on the morning of November 4, 2010, during an air parade at the Air Force Academy in El Bosque, Santiago. Although no one noticed anything unusual during the parade, seven witnesses came forward afterward with different videos all showing a strange metallic object moving at extremely high speeds.

The parade was part of a ceremony that takes place every four years to celebrate the changing of the Commander-in-Chief of the Chilean Air Force. The president, the heads of the all of the Chilean armed forces, and many other officials were present. During the parade a group of Chilean Air Force aerobatic flyers, called the Halcones, a group of F5s, and a formation of F16s flew over the spectators. The videos show different stages of these various flybys. 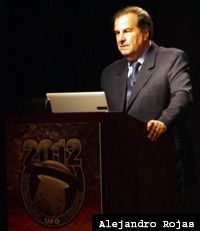 At first glance the videos do not look unusual, but if you look closely on each, there is a slight flicker as if something small moved across the screen very quickly. Upon closer examination, Bermudez says each video shows what appears to be a round metallic object with a dome moving across the screen.

Bermudez is the director of the Committee of Studies of Anomalous Aerial Phenomena (CEFAA), which is an arm of Chile's version of the FAA. During their analysis, Bermudez says CEFAA first went to skeptical astronomers. Despite their disbelief in UFOs, the astronomers estimated the speed of one of the objects at 10,000 KM (6213 miles) per hour.

Gen. Bermúdez showed the analysis done by the astronomers from CEFAA's External Committee of Advisors, which established that the object was not a meteoroid, a comet, reentry of space junk, a bird or an airplane. Furthermore, the scientists' report stated the UFO undertook "a risky maneuver in front of the Halcones from west to east" and that it did "a flight maneuver at low altitude and high speed." The report also established that "the object shows light and shadow effects of metallic like reflections and shows ellipsoidal shape" and that "the land observers do not detect the object in spite that it passes over their heads, thereby it is not accompanied by a sound wave."

Screen captures from the videos: 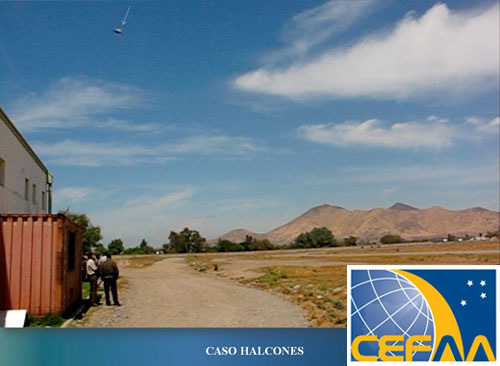 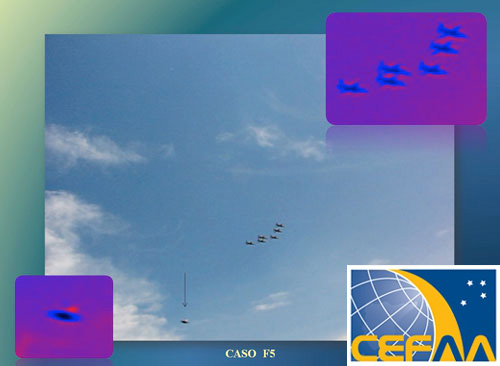 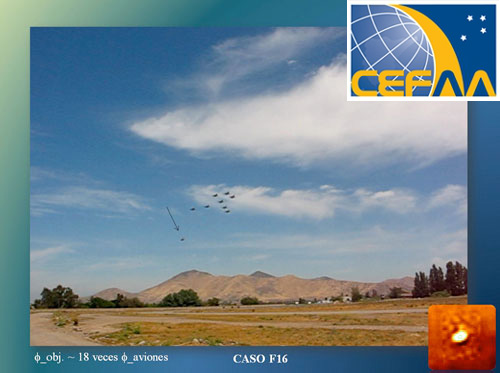 I was the emcee of this conference, and while preparing for his talk behind the stage, the general told me that he had actually been skeptical of UFOs, but this case had finally convinced him there was something mysterious to the phenomenon. He told the audience at the UFO Congress he is convinced it is very important that the study of UFOs continue. Furthermore, he believes that an agency should be established to investigate the issue on a global scale, preferably within the United Nations.

Chile is one of the few countries around the world that has a government-backed UFO research organization. Although this case is the most impressive, they have investigated several cases they have found to be anomalous.