Every month, numerous UFO videos are posted on YouTube by people all over the world, hoping to prove they have that smoking gun evidence that we are being visited by ET spacecraft.

Some are obvious hoaxes. Some turn out to be balloons, weather anomalies or other mundane objects that just look otherworldly. And then there are those that can never really be explained away.

In October, one of the more interesting videos came from a Michigan man who claimed to capture UFOs on two occasions with his home security camera. The videos are quite vivid, depicting the strange objects continually changing colors and reportedly shining a beam of light to the ground.

The man who goes by the YouTube moniker "jcattera" posted, on Oct. 8, his first UFO video -- that he recorded on Oct. 2.

In this first video, jcattera's UFO appears at around 1:12:

"I captured this footage on my home security camera around 11 pm in my front yard in Southeast, Mich., and I'm about eight miles north of an Air National Guard base," jcattera wrote on his YouTube page. "I was on the lookout for capturing a fireball. I thought I might be able to catch one on video, but I never expected to capture this!"

Jcattera explained that he was shooting in color instead of black and white because he hoped to record colorful fireballs -- very bright meteors -- streaking through the night sky.

In the video, while dogs bark in the distance, a bright object comes down from the sky, constantly changing colors and then moving off-screen to the left before showing up again from higher up, performing the same downward-to-the-left maneuver.

The object then seems to hover and move extremely slowly and silently toward the right before suddenly shooting straight up in the sky.

Huffington Post was intrigued with the vivid changing colors and smooth, almost acrobatic movements of the UFO, so we showed the video to former FBI Special Agent Ben Hansen, to get his take on it.

"I'm really on the fence with this one. It could definitely be hoaxed," Hansen told HuffPost in an email. "I'm not liking the very flat two-dimensionality of the light. At no time does it pass behind trees that are apparently close to the camera. It conveniently stops right before it would need to pass behind them.

"The green light looks 'projected' like an overlay of some sort of a video filming a pane of glass with lights on it."

Hansen also said he had problems "with the camera's exposure settings...I would expect the focus to go in and out as it compensates for lighting. This would also affect how much of the ambient surroundings you'd see, but the tree outlines and horizon never change and get brighter or dimmer when the light pulsates and gets brighter."

As if that weren't enough, the same individual, jcattera, claims to have videotaped the same UFO 10 days later.

"This is probably the best 'Close Encounter of the Second Kind' [where a UFO interacts with the environment] I've ever seen, and the video evidence from this footage will probably put any doubters to rest from the first video," he wrote on YouTube. "This amazing footage was captured on my home security camera on Oct. 12, 2013 at approximately 2:15 am.

"Take a close look at the orb at 2:25 as it appears to be drawing the water up from the pond," said jcattera.

"I find it a bit too perfect that so much of the action takes place directly in the frame, a sign which may indicate a staged event," Hansen suggested. "In both of these videos, we see no changes in the brightness of the ambient surroundings or skyline. The orb stays in focus as if the camera never had to adjust. This could indicate the orb was actually added with post production software and overlaid on top of the nighttime scene."

Jcattera was planning to set up more cameras, hoping to get better footage. We'll see what he comes up with. 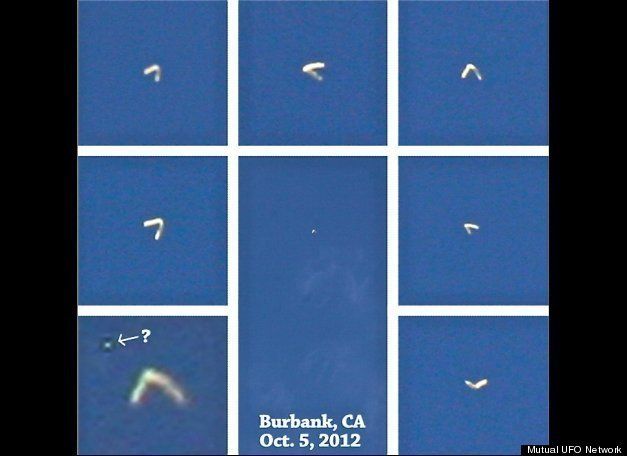