Literally faster than the eye could follow, an unusual object was accidentally photographed above the landmark Muiderslot Castle in the Netherlands.

On May 25, Corinne Federer and her mother visited the medieval castle, built in 1285 near Amsterdam. Federer, a supply chain manager for adidas in Amsterdam, and an avid photographer, was shooting High Dynamic Range, or HDR, photos of the castle.

"In order to create HDR images, you take three or more exposures -- this one happened to be five -- and you shoot them all at the same time, because you then overlap the images and it gives you the full spectrum of light, which your camera can't capture but your eyes can," Federer, 43, told The Huffington Post in an exclusive interview.

Check out these detailed images of the Muiderslot Castle UFO:

When Federer reviewed some of the images she had taken, she was startled to see that in one five-image progression, something unusual appeared.

"It was a tubular-shaped object that had an S-shaped fin on it. If it had been any type of missile, it would've had multiple fins, but facing the same direction. We heard nothing, it was completely quiet out. The more I flipped through the frames, it was kind of creepy," Federer recalled. "I've been shooting for quite some time and I've seen other stuff in the news, but I've never seen anything [like this] with my own eye.

"I couldn't wait to get home where I could blow it up and see what was really there. I looked at the image information -- at the shutter speed -- and (the object) was blurred at 1/250th of a second, so it had to be going superfast. The object is not in the frame before or after, so it had to be going really, really fast. I was kind of blown away."

Federer made some adjustments in the gray scale settings of the raw images and boosted the blacks and shadows to produce secondary images that further clarified the mystery object. She then realized that, within the five-image sequence -- keeping in mind that these five pictures were taken within a one-second time frame -- in the image following the appearance of the UFO on the right side, suddenly she saw a portion of another object (or the same one), but on the left side of the exposure.

"The most interesting part of that, for me, is those fins are on the opposite side. At first, I thought the fin side must be a tail, but after looking at it from the second image, it almost looked like the fins were (at) the front and it was turning around and coming back into the frame."

Further intrigued, HuffPost reached out to Ben Hansen, a former FBI special agent, who has used his investigative skills to analyze thousands of videos and photographs of alleged paranormal events.

We asked Hansen, the lead host of Syfy Channel's "Fact or Faked: Paranormal Files," to give us his opinion of the Muiderslot Castle UFO images.

"Having reviewed the raw files, there's no overt indication that the photos have been manipulated with post editing software," he told HuffPost in an email.

"The object's appearance is internally consistent with the rest of the photo. For instance, look at the darker area of the underside of the object compared with the clouds. The shadowing is similar on the underside as well as the lighting on the top of the object and the clouds where the sun is brightest. Having the sun in the frame is helpful because it indicates where shadows should appear. This further supports that the object was photographed 'in-camera' and not added later."

Hansen doesn't agree with Federer's suggestion that the object traveled from left to right and then back again.

"If we were to assume that the protrusions are stabilizing airfoils -- such as might be found on a rocket or jet -- then it would make sense that the larger fins would be placed on the rear of the object and, consequently, we would know its direction," Hansen wrote. "However, the available pixels which blur and separate the protrusions from the main body equally suggest maybe they are NOT airfoils, but some other part of the object that is in rapid motion."

So, what exactly does Hansen think Federer captured in the blink of an eye?

"If I had to place my money on it, I would say that we're looking at insects. We typically see many wing protrusions on insect rod cases, but they do come in the single pair variety, too. It all depends on the shutter speeds and motion of the insects." 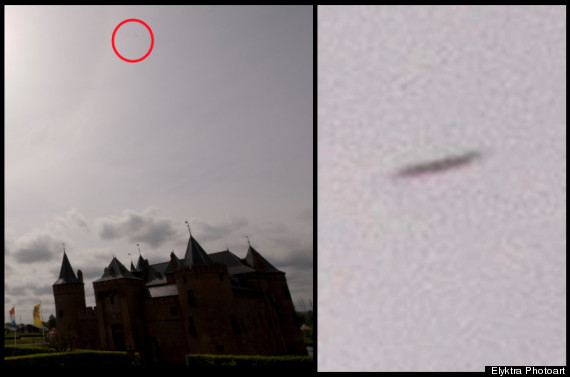 Another thing makes this case a little more interesting. While Hansen was closely studying the images captured by Federer, he noticed something else (see above).

"I found another object. To the right of the sun, we see a slender, almost disk-shaped object that appears to have no protrusions. Hmmm."

Federer isn't sure what she photographed over the Muiderslot Castle that day, but offers a personal cosmic view of things.

"When I look at the amazing photography which captures the night sky in long exposures, and you can see how many stars are out there, I think there's absolutely no way that we're alone. So I don't find it unreasonable to believe that there's another habitable planet somewhere that has started exploring space.

"Maybe they're more advanced than we are and they've come by to see what's going on here."

Watch these videos of reported UFOs from around the world: