It must have seemed like an aerial invasion to the many eyewitnesses who gazed skyward in St. Petersburg, Russia, on the nights of April 9 through 11.

Reports of the UFO activity didn't initially receive wide coverage outside of St. Petersburg, but have since trickled out.

Most of the strange light formations were seen and videotaped by many people in and around Russia's second-largest city, including one ball-shaped object seen hovering above St. Petersburg's Pulkovo Airport.

According to the Russian news site LifeNews, airport employees were concerned the UFO might cause a disruption during takeoff and landing of aircraft.

A short time later, before any action could be taken, the UFO vanished.

As strange lights danced around in the sky above the city, citizens aimed their cameras, the Moscow Times reported.

One video shows four bright lights hovering in the evening sky near a tall building before eventually disappearing behind the structure. (See image below) 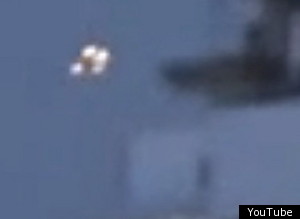 "My daughter who lives over on Grazhdanke told me about a UFO," said one caller. "I live on Komendantsky Prospekt. I looked out the window and also clearly saw an orange spot. Then one spot separated and plummeted downward. The spot flickered, disappeared and reappeared. It is visible in various neighborhoods."

Authorities have yet to make any pronouncements on the various UFO sightings, despite unconfirmed reports that local army officials hinted the aerial activity was some sort of training exercise.

And, according to the Moscow Times, at least one local scientist has gone out on a limb with his personal UFO views.

"Aliens look at us as if we are idiots, undeveloped people," said Sergei Smirnov of the Pulkovo Observatory outside of St. Petersburg.

"Perhaps they have fenced us in with their own sort of screen for the whole galaxy and are sending warnings to hundreds of billions of stars that the civilization near the Dwarf star -- which we call the sun -- is dangerous."