NASA's Curiosity rover had hardly touched down on the surface of Mars on Aug. 5 when its cameras started transmitting images back to Earth of some odd things -- what some were calling UFOs.

In one instance of Martian weirdness, YouTube poster StephenHannardADGUK put a curious Curiosity image through a series of filters, revealing a number of UFO-type objects, or specks or blotches, in the sky above.

Here's an enhanced version of the four alleged UFOs above Mars.

"After watching the video, it is actually quite clear that these are one-pixel sized image anomalies," said video analyst Marc Dantonio, who has studied many UFO videos and created special effects and physical models for U.S. government projects.

"I fully concur at this point that these are dead pixels on the imager," Dantonio told The Huffington Post in an email. "All CCD [cameras] have them, and in a bland atmosphere like that at Mars, they would be very obvious as opposed to an active atmosphere like Earth, where they could end up hidden for a long time before anyone noticed them."

The mysteries began as soon as Curiosity touched down.

Curiosity was lowered onto Mars' surface from the descent module by means of a crane type device and rockets that allowed it to hover until making a soft landing. Once it reached ground, NASA Jet Propulsion Laboratory scientists sent the descent stage off, so as to not land on top of the rover.

Shortly after Curiosity made its amazing, precise landing in Gale Crater, the rover sent an image to Earth of something that looked like a dust storm in the distance. Approximately 45 minutes later, as seen in the dual image below, another image snapped of the same location by Curiosity showed the dust anomaly was gone. 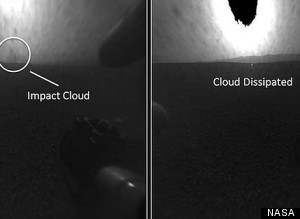 "If you look at the left image, we believe we've caught what is the descent stage impact on the Martian surface," said NASA engineer Steven Sell.

"The descent stage would have already impacted by the time this picture was taken," Sell told reporters at the JPL in Pasadena, Calif. "But the evidence we have that this is something we caused is the fact that the same image from the same camera taken 45 minutes later -- that artifact is not there anymore."

A film sequence transmitted by Curiosity shows white-colored objects moving near the horizon of the red planet, reports clickorlando.com.

In the following video, a white object can first be seen lifting up from the horizon, followed shortly by another object at the left of the field of view, moving toward the right, slightly above the horizon.

Check out this video of the two white objects.

The Curiosity rover hasn't even set out on its first test drive of the Martian landscape, and there's already a sense of mystery surrounding it.

Here's one more potential enigma to add to the mix.

While looking closely at a panorama image sent to NASA JPL scientists by Curiosity, this reporter happened to notice something odd on the distant horizon. A closer look revealed a solid, circular object just sitting there quite a distance away from the rover.

One man's oddity is another man's boulder. Check out these and other images.

While we're not prone to jumping to any conclusions or wild speculation, it still seemed weird enough to put in a call and to send these images to JPL to see if anyone on the Curiosity team thinks this object is simply a very large, circular rock.

JPL hasn't yet responded, but hopefully, they'll steer the little-rover-that-could out in that direction when it soon begins to drive around, determining the red planet's habitability. 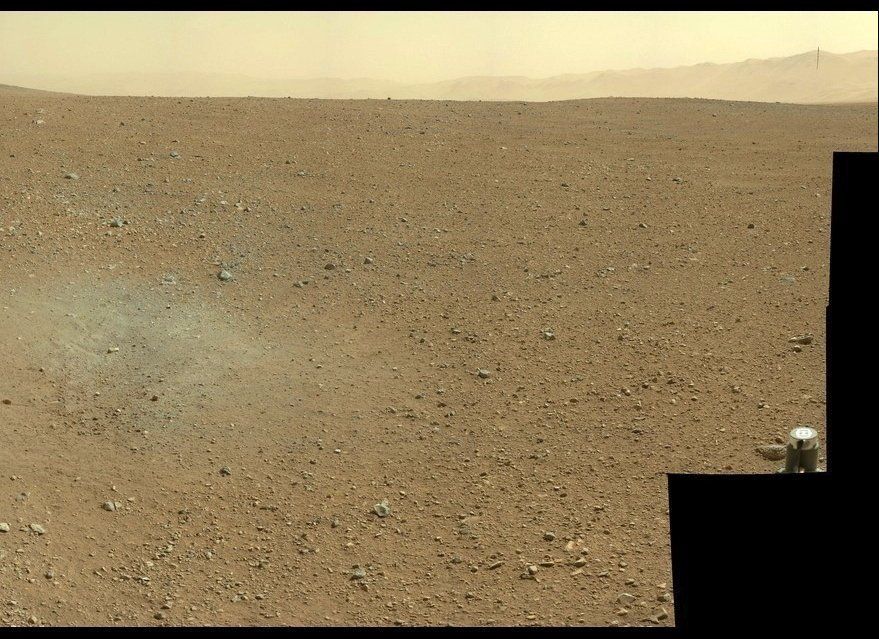