2011 was a very -- watch out, here it comes -- out-of-this-world year for UFOs. Every month of the year gave us UFO stories to digest, wonder about, or laugh at -- depending on your point of view or belief about UFOs.

Ancient UFOs; scores of videos and photographs; military and government officials offering credible testimony; thousands of pages of previously classified documents; disk and dorito-shaped craft; an official state highway marker erected to commemorate the most widely publicized UFO abduction story in history; petitions sent to the White House asking the Obama administration to release all UFO information; an alleged alien spaceship hiding near the planet Mercury; an ET reportedly photographed standing in a Brazilian rainforest; and a theologian who says religious believers are ready to share a pew with aliens.

These and much more were all there for the taking. With the proliferation of so many video cameras and phone cams, it's not surprising that, according to the Mutual UFO Network -- the largest privately funded UFO research organization in the world -- there were 67 percent more reports of unidentified flying objects in 2011, compared to 2008.

As 2012 looms with the promise of a new year of UFO events -- where believers hope the government will finally acknowledge that some UFOs are extraterrestrial vehicles -- let's step into the wayback machine and re-visit the top 11 UFO stories of 2011.

Wow, a truly amazing year for UFO believers, skeptics and those in-between.

With the first annual Women's UFO Symposium scheduled for May 2012 in Texas, we can't wait to see what else the new year has in store for us.

Keep looking to the skies and collecting those pictures and videos! 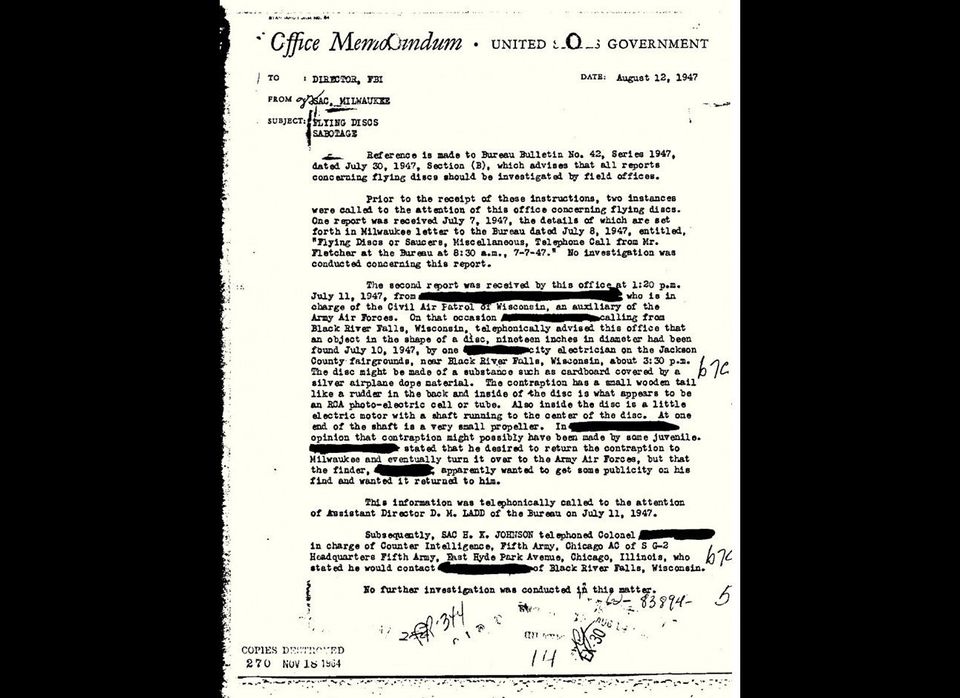 1 / 13
Number 11: J. Edgar Hoover's FBI Took UFOs Seriously
In early April, the FBI created a new website, <a href="http://www.aolnews.com/2011/04/20/j-edgar-hoovers-fbi-took-ufos-seriously-documents-suggest/" target="_hplink">The Vault</a>, which gives the public an opportunity to view documents in an online "electronic reading room." Some of the 2,000-plus documents are about UFOs. While the U.S. government has always maintained UFOs don't warrant any serious investigation, documents from the late 1940s indicate FBI Director J. Edgar Hoover's interest in UFOs. Pictured is a 1947 document sent by a Wisconsin agent to Hoover, concerning a small, disc-shaped object found at a fairground that contained a photoelectric cell, electric motor and a propeller. While agents felt it was "made by some juvenile," it's noteworthy that they felt it important enough to inform Hoover about it.
FBI