Unemployment, gas prices, and fear over global warming aren't the only things skyrocketing -- so are mysterious objects rocketing through the sky.

The Mutual UFO Network -- the largest privately funded UFO research organization in the world -- tells The Huffington Post that more people than ever are reporting unidentified flying objects, mostly in the United States and Canada.

"Over the past year, we've been averaging 500 sighting reports a month, compared to about 300 three years ago [67 percent]," MUFON international director Clifford Clift said.

"And I get one or two production companies contacting me every week, wanting to do stories on UFOs."

So far this week, mysterious aerial lights in Laredo, Texas, and Kansas City, MO., lived up to, at least initially, the strict definition of UFOs, namely "Unidentified" Flying Objects.

That, of course, doesn't mean that little green men are watching us. It's generally accepted that 95 percent of all sightings are easily dismissed. Some turn out to be conventional aircraft, others are satellites or weather balloons -- and then there are the hoaxers with Photoshopped concoctions.

In the case of the Kansas City sighting, the UFOs turned out to be the Army Golden Knights parachuting team, performing a nighttime jump. But the explanation for the blinking light over Laredo is still up for grabs.

However, the remaining 5 percent of all UFO reports aren't as easily explained. And many of them are reported by commercial and military pilots. These were examined on "Secret Access: UFOs On The Record," a new History Channel documentary that premiered on Thursday.

The program was based on Leslie Kean's New York Times bestseller, UFOs: Generals, Pilots and Government Officials Go On The Record.

"There's a great case from South America where a commercial flight was over the Andes after dark, cabin lights were on and everybody on one side of the airplane was looking out at this lighted object that was approaching them at their altitude," said Richard Haines, a former research scientist from the NASA Ames Research Center.

"The closer it got, the dimmer the cabin lights became. Well, that's an interesting electromagnetic effect."

Haines was once a UFO skeptic until he started hearing reports from commercial pilots who shared their UFO experiences with him. He eventually created an organization called the National Aviation Reporting Center on Anomalous Phenomena (NARCAP), which serves as a confidential reporting venue for pilots, crews and air traffic controllers who are otherwise afraid to make UFO reports.

"I was trying to be a conscientious scientist and let the chips fall where they may and I immediately found a great deal of bias and fear by people who shouldn't be afraid. Science should not be afraid," Haines told The Huffington Post.

Haines and his NARCAP colleagues prefer to use the term unidentified aerial phenomena (UAP) to include "a wide range of atmospheric phenomena and effects that might well be extraterrestrial craft, but they might well be something quite different that science doesn't understand yet."

Pilots have reported different types of brushes with unexplained objects, according to Haines' years of discussions with them.

"One is an encounter where the airplane is flying along, minding its own business, usually on autopilot, when the phenomenon will come alongside, approach the airplane, pace it, sometimes do maneuvers around it and then fly away," Haines said.

And that seems to be what happened during a highly publicized 1986 case where a Japan Airlines 747 crew was flying over Alaska when they encountered and reported two UFOs pacing their airplane to Anchorage air traffic controllers. Then the pilot reported the appearance of a third, huge circular craft.

"When the controller checked with military people, they said they did have a target [on radar] -- not just one target, but a double primary target," said John Callahan, former head of the Federal Aviation Administration's Accidents, Evaluations and Investigations Division in the 1980s.

"When the pilot first reported the UFO, he said it was a huge ball of light and about four times bigger than the 747 he was flying," Callahan told The Huffington Post.

The more than 30-minute close encounter ended when the UFO vanished. But the most telling part of this case is the aftermath when Callahan was contacted by the CIA.

"I get a call from this guy in the CIA who tells me he wants to talk to me about the UFO. I said, 'What UFO?' He said, 'The one that was in Alaska.'"

The next day, Callahan found himself at a meeting with individuals from Pres. Ronald Reagan's scientific staff, the CIA and FBI, where he was told to hand all the materials about the case over to them.

"After I showed them the materials three times, one of the scientists stood up asking questions about the radar. Finally, another man stepped forward and said, 'OK,' and he pointed to the screen and said, 'This event never happened. We were never here. We're confiscating all this data and you're all sworn to secrecy.'

"I asked him what he thought it [the object] was, and he said, 'It's a UFO. Look at them [pointing to the scientists], they're drooling and can't wait to get into this data. This is the first time they ever had more than a minute of radar data on a UFO before.'"

Callahan says he then urged the CIA agent to let him contact the media about the UFO event. "'Oh, you can't do that!' he said. I asked why not? He said, 'It would frighten the American public -- they can't know about this.' So they picked up all the stuff and left," Callahan recalled. 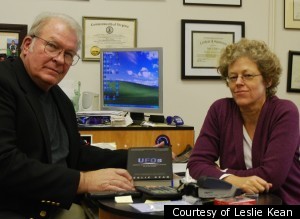 The former FAA official (pictured left with author Leslie Kean) thinks that Earth is being visited by aliens.

"Oh, I think we really are. And the government doesn't tell you the truth all the time. Part of the stuff I was doing in my last 10 years with the government was lying to the public. I gave out disinformation -- an approved tactic in the government -- because the people can't handle the truth."

After years of working with pilots and trying to rationally understand what they sometimes encounter during flight, Haines is a little hesitant when asked what he thinks or hopes the truly unexplained UFOs or UAP may turn out to be.

"That's a loaded question. Again, I'm a scientist first, I'm not a prophet or a politician, and I honestly don't know, but I'm trying to do my job and come to a rational answer based upon the evidence.

"I've come to the conclusion that there is quite an amount of good evidence suggesting intelligence behind the phenomenon. That's kind of the bottom line here."