Whatever it was over the skies of Tucson, Ariz. and Kansas City, Mo., eyewitnesses in both cities agree -- it was quite a show.

Unusual displays of lights were reported in both cities on Saturday night, giving rise to UFO chatter.

According to one eyewitness, identified as Cbazz on YouTube: "My family and I witnessed these strange amber lights in Tucson on our way home from dinner. There were seven or eight of them crossing the sky, some solo and others in pairs flying very, very close together.

Watch the UFOs videotaped over Tucson.

"Living in this part of the country, we often hear fighter jets from the Air Force base, but we are used to that and it is always recognizable and very loud," Cbazz wrote.

"These objects we saw tonight were silent and moving across the sky very fast....Not sure what we were seeing, but I never really believed in this sort of thing until tonight. Glad I had my phone to record."

Several eyewitnesses saw and videotaped similar objects in the sky -- but this time, they were flying over Kansas City, Mo.

"Not for sure what they are, but I got several videos of them and pics. Looks like a UFO fleet!?" wrote YouTube poster jemnich1, who was contacted by another witness, GoGraveside, who sent this message on YouTube: "I really hope you get to investigate this incident. I was in the same vicinity and recorded the same lights on my cell phone. There were 3 additional passengers in my vehicle at the time who witnessed the 'lights' as well."

So, what were these folks looking at from different parts of the country? Or does it just get buried in those numerous reports that are never adequately explained?

"In my opinion both videos are definitely man-made, combustible objects -- most likely Chinese lanterns," according to Ben Hansen, a former FBI special agent whose investigative skills have been used to analyze thousands of videos and photographs of alleged paranormal events.

"The Kansas [City] video is slightly different, especially in the beginning because they appear to move more quickly, but that could simply be a perspective illusion of the videographer's zoom and shaky tracking," Hansen told The Huffington Post in an email.

"Both videos are consistent with the characteristics of ground-launched, fire-lit objects. In the last five years, we've seen an exponential increase in the use of Chinese lanterns and similar lighter-than-air objects launched as hoaxes or as part of celebrations.

"If you've never seen them in the sky before, the experience can be quite stunning to the casual observer."

Hansen, host of the Syfy Channel's "Fact or Faked: Paranormal Files," is also the on air host of the newly launched "Explain That Radio" talk program. He shared the following images with HuffPost of some photos he took of Chinese lanterns "to show people how mysterious they can appear if you don't know what you're looking at."

To help people discern whether they're seeing lanterns "or craft from another world," Hansen created this checklist:

1) Did the sighting take place on a holiday?
Sightings of lanterns and other candle-lit objects increase around holidays, such as New Year's, Christmas and the 4th of July, or during celebrations such as birthdays and graduations.

2) Do the objects first seem to appear near the ground?
Quite frequently, you can locate the launching location of lanterns by observing the angle at which the wind carries them when they first appear and then tracing that trajectory to the ground.

4) Do the lights extinguish as they ascend or pause in the air?
Lanterns or other candle-lit objects work the same way as hot air balloons. They will continue to rise until they burn up their fuel or the wind blows them out. They may create strange triangle or line configurations, but their position in the sky is generally left at the mercy of the wind.

5) Do they exhibit any extreme maneuvering?
You can confidently eliminate Chinese lanterns as a culprit if you observe the objects moving hundreds of miles an hour or making extreme zigzag maneuvers. Lanterns move quite slowly and won't exhibit extreme maneuvers. Check the wind direction and see if it's consistent with something that might be drifting in the wind and not moving on its own power. 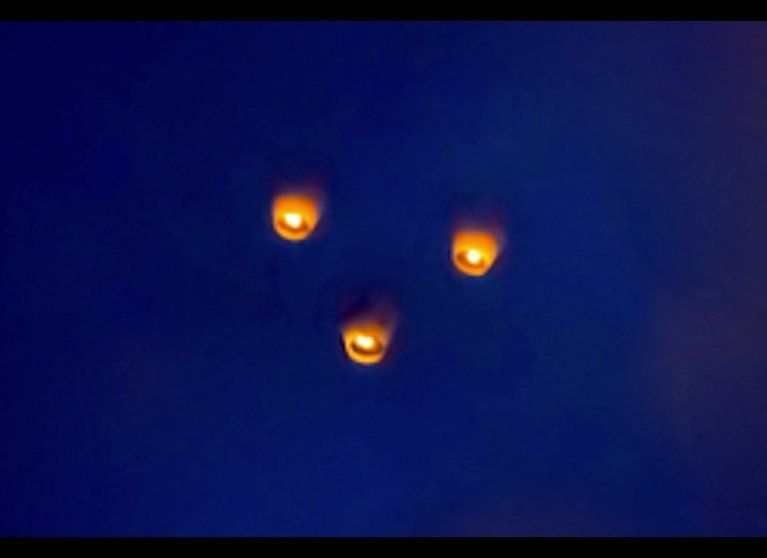