The farm workers engaged in a worldwide grape boycott. Finally, growers yielded and signed contracts with the farm workers union. The name Cesar Chavez has become known around the world as the farm-workers' leader, but few are aware that the union's effort would have been fruitless had it not been for a group of women heroes who not only were among the first strikers, facing arrest and jail, but also conducted the behind the scenes work necessary to create a union; not only women icons like Dolores Huerta, Helen Chavez and Jessica Govea, but women like Linda Legrete who oversaw the union's national service center to handle daily problems farm workers face and Esther Uranday who is exemplary of these women heroes. 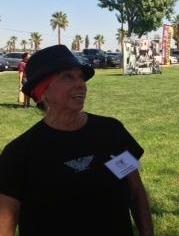 
At forty acres last weekend, and in the local paper, Esther told her story. Now, 78-year-old Esther was 28 when in 1965 when she and her family walked from their jobs as Delano grape pickers at D.M.Steele Company. As a child, like Cesar Chavez, Esther and her family migrated throughout California from the Delano grape fields to the plums and apricot orchards s in what is now Silicon Valley. Her schooling ended before high school because she did not have clothes to wear to junior high. When the Filipino and Mexican workers went on strike in Delano, she was the first D.M.Steele employee to join the strikers. She went to the tiny United Farm Workers tiny office at 102 Albany Street in Delano and spoke with Cesar Chavez and Dolores Huerta. Cesar and Dolores sent Esther to the fields to organize. Rising at 3 a.m. she went from field to field talking with workers arriving to pick grapes. Her aim was to convince them that together they could improve the lives of themselves and their families. With 43 companions, 14 of them women, she was arrested for yelling outside a grape field "Strike" and "Huelga." In the Kern County jail she saw that the arrested strikers were heroes for standing up to their cruel bosses.

At the Albany Street office, Esther became friends with Cesar's wife Helen who oversaw the union's credit union, one of the few benefits the union could immediately provide members. Soon, Dolores Huerta who wanted to return to the fields and organize workers saw something special in Esther and convinced her to take over Dolores's job recording, union membership. Starting at the Albany Street union office, she moved to 40 acres when the union's center shifted there over the following years. When Cesar asked Esther to supervise the union clinic, she told him she did not know what to do; she had not attended junior high school and had never worked in an office. Relying on the principle that carried the union to success, Cesar told Esther, "You can do it, Esther. Si se puede." When the union entered contracts with growers several years later, Esther supervised the union's hiring hall system. With pay of $5 a week, like all union staff, Esther had become a part of the union. When she saw a train loading grapes grown in Delano, they decided to stop the train. Fortunately for Esther, Cesar heard of her plan to lie on the tracks and told her, "Don't lie on the tracks. You will likely be killed before you are arrested."

When in 1970 after years of farm workers' striking, fasting, marching, praying and persisting, Delano grape growers yielded and recognized the union, many thought the union work was over. But the women heroes like Esther soon learned that it had just begun. Farm workers had prevailed in the grapes, but there was lettuce and celery, citrus crops, apples, mushrooms and all agriculture where too many workers were treated like slaves. As Robert Kennedy Jr. noted at the fiftieth anniversary in Delano last week-end, laws Southern plantation owners relied on in the 1940s to oppress black farm workers were applied in California in the 1960s to oppress Filipino and Latino farm workers.

Talking with Esther on the grass at 40 acres while supporters thanked the 1965 strikers who walked off jobs, losing the income needed to buy food and pay rent, Esther reminded us that too many farm workers had lost their homes during the grape strike. When asked why the workers were willing to lose everything if they left their jobs, Esther reminded us that they were paid barely enough to buy beans and rice; there were no toilets in the field, women held it as long as they could and ultimately had to relieve themselves in the field where they worked. There often was no water and when there was, it meant scooping luke-warm liquid from a bucket with a cup on a string shared by the workers.

Over the past 50 years, the United Farm workers has grown. It has contracts representing farm workers across the western United States. In 1967, when the union was still in its infancy, Cesar Chavez told me in Delano's Memorial Park that the working conditions of those who put food on our tables are unconscionable, but more important than the minimal amount of pay they receive and the toiling long hours in 105 degrees with no toilets or water, is our lack of respect for the work they do. Today, farm workers are still dying from working long hours in 105 degrees. They are still fighting for respect. In the words of the union president since the death of Cesar Chavez more than 20 years ago, Arturo Rodriguez, "Farm workers will prevail; they have hope." Like Esther and the other women heroes learned from Cesar and Dolores, si se puede.