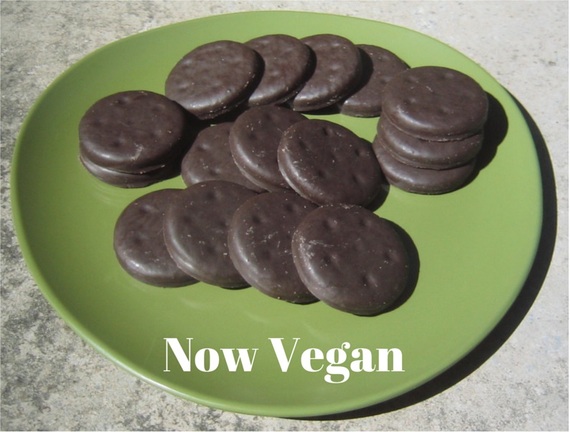 It's Girl Scout cookie season, and I know this because there are 17 cases of the tasty treats in my living room. This annual resolution buster, happily nestled between Christmas and Easter, marks the biggest annual fundraiser for Girl Scouts, and cookie selling remains an iconic rite of passage for young girls (and their moms) throughout the United States. My daughter began selling the cookies seven years ago, and I have helped sell them at my office, loaded the car for booth sales throughout our neighborhood, and wolfed down more than my share of Tagalongs, Samoas and Do-si-dos. (You can keep the lemon ones and the logo-emblazoned butter cookies.) But of course, the star of the Girl Scout cookie universe is the chocolate-covered, peppermint-flavored wafer known as the Thin Mint. This year, though, there is something rotten in the state of baking sheets: Thin Mints have gone vegan!

With little fanfare, the Girl Scout brain trust directed the bakers of its most popular green-boxed confection to change the recipe and make it free of any dairy products. Guess what? By my taste buds, they're not the same. Yes, Girl Scout intelligentsia will say otherwise as does my daughter's highly-devoted volunteer leader. But I'm telling you, they're missing something (butter and eggs, duh) that gave them that richness and texture that added to their addictiveness.

You may wonder how I am qualified to make this proclamation. Allow me to explain. There are three topics in this world for which I claim sufficient knowledge to stand toe-to-toe with any known expert. They are, in no particular order, the state of the public relations industry, college football and cookies. I have eaten cookies practically every day of my life. I learned to bake them with my mom and taught my daughter the same craft. So, just as print media is terminally ill and the college football playoff will eventually be eight teams, I tell you this: The Thin Mints aren't the same. (Plus, my wife said they taste drier.)

Now, I could continue on some technical rant about the removal of whey from the recipe and how the transition to a vegan-friendly formula has to change the cookie, but I would rather focus on the "why?"

Why would an organization change the recipe of its best-selling and most iconic product?

Might just be cost. We have all seen the rise in grocery costs, and dairy products are helping lead the charge. Perhaps going vegan is a cost-cutting move by the Girl Scouts. The price per box only rises every few years, so saving a few pennies on the about 200 million boxes sold per year will quickly add up to real money.

Gotta reach those vegans? As far as I can tell, there are about eight million vegans in the U.S.: about 2.5 percent of the population. Are they cookie consumers? Damn right they are. But, would you risk changing your top product to reach them? Wouldn't it make more sense to create a new cookie that happens to also be vegan? Seems like the risk of alienating a rabid fan base far outweighs the vegan market opportunity.

Somebody in the marketing department says customers won't notice the difference. Food production is a big, high tech business, and a lot of research goes into most products that reach grocery store shelves. I'm certain the decision to change the Thin Mint recipe wasn't an easy one, but I wonder if it was made in an over-sized vacuum. When I was in high school, a little beverage producer named Coca-Cola decided to change the formula of its iconic soda. "New Coke" completely replaced the original formula for a few months in 1985, much to the dismay of customers, who rebelled against the new, sweeter taste (and hoarded bottles of the old version) until Coca-Cola returned to its original "Classic" formulation. If a company like Coke can screw up by messing with a classic recipe, then so can the Girl Scouts.

Who cares, controversy is good for business. Another theory is that the Girl Scouts have taken a calculated risk, knowing that controversy might be good for business. Perhaps the top scout leaders figure publicity about the switch to vegan-friendly cookies will more than counterbalance any blowback. Imagine public debates, taste tests, dunking vs. not dunking, etc. Not sure that calculus makes sense to me, but it could be a boon for Girl Scout executives who believe that any publicity is good publicity.

Perhaps I'm over-reacting, but changing the go-to Girl Scout cookie might be the first big reputational crisis of 2015. If you don't believe me, I suggest buying a box of Thin Mints and taking the taste test yourself. Who knows, maybe the Thin Mint taste test goes viral and becomes this year's version of the Ice Bucket Challenge. Regardless of what you think, buy some cookies -- and donate a box to our troops overseas while you are at it. In the meantime, please pass the milk.