You thought that George W. Bush was an ultra-rich kid with a sense of entitlement to rule and a mission to take care of fellow millionaires?

At left: Britain's Brand-New "21st Century" Prime Minister -- David Cameron. Snapped in 1987 in his "Born To Rule" outfit -- worn by all members of The Bullingdon Club -- the UK equivalent of the elite Skull & Bones Society.

Born 1966. Raised in a fabulously wealthy family as heir to a massive family fortune. His Conservative Party is committed to passing a tax cut that will only benefit the 3,000 richest families in the UK -- including his own of course.

He was schooled at England's most expensive and most exclusive private school -- Eton -- and then attended Oxford University where he was a prominent member of the notorious Bullingdon Club.

The club -- a UK equivalent of Yale's exclusive Skull & Bones Society -- is an ultra-exclusive clique that admits only the nation's richest and brattiest trust-fund kids. Its openly declared primary activities are outlandish drinking, boisterous behavior and damaging property. 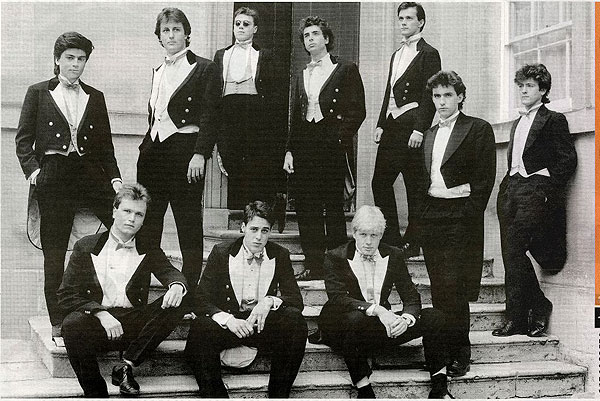 BORN TO RULE (above): Cameron & his Bullingdon Club cronies in full regalia in 1987. The blond bombshell in the front-row is fellow Conservative Boris Johnson -- now reigning over London's citizens as their Mayor.

A well-documented typical evening while Cameron was a member in the late 1980s consisted of the members taking over one of Oxford's fanciest restaurants for the night, eating the priciest food on the menu, ordering and quaffing copious quantities of the most expensive wines and champagnes -- and then totally trashing and destroying the entire restaurant, furniture and fittings. The coup de grace at the end of each such excursion was to go up to the traumatized, distraught restaurant owner and, in a gesture that dates back to the aristocrat-peasant relationship of centuries passed, contemptuously throw wads of banknotes at the hapless owner as recompense for the massive damage caused.

That is the background of Britain's new Prime Minister -- whose only employment other than climbing the greasy pole of Conservative Party politics to become party leader was a stint as corporate flack and spin-master for a down-market TV network. 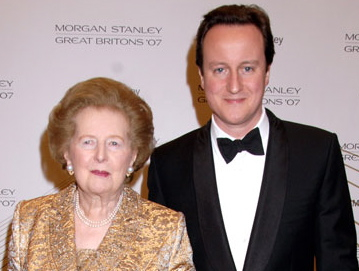 AN OMEN?: "Damien" Cameron with the mother of his deeply-held political views

He now has the opportunity to follow in the tradition of the political hero he idolized in his youth, Margaret Thatcher, and do unto Britain's public health-care system, education system and poorest citizens exactly what he and his Champagne Charlie, Hooray Henry, Upper-Class Twit cronies did to Oxford's restaurants twenty years ago. Trash and wreck them. With the added bonus for him that, unlike his days in the Bullingdon Club when he and his fellow trust-fund brats at least paid for the damage they caused, now they can do this all for free. 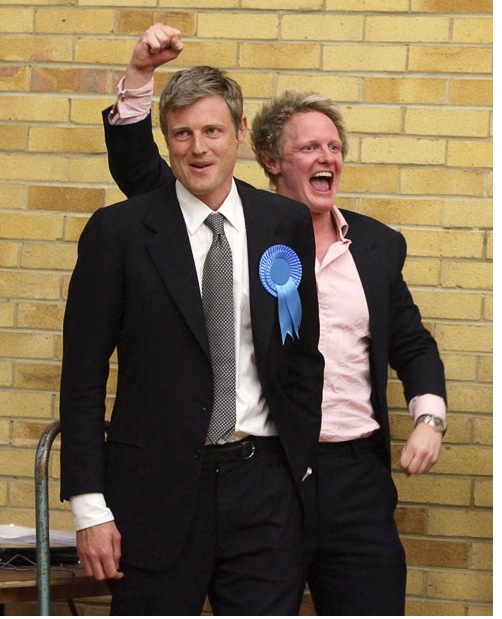 The nation's money is already spoken for. Massive tax giveaways for the richest 1% and special business favors (for services rendered) to Rupert Murdoch.

As we've all seen, it's a recipe for economic success that worked so well for his fellow "compassionate" conservative, George W. Bush.

However, though he came from a sheltered background of white, monied privilege, Cameron has had major success in his oft-pronounced claim that he would modernize and broaden the Conservative Party's public face. Prior to Cameron's leadership, the party's Members of Parliament were primarily white, male and avowedly "straight". Now, after just five years of Cameron's diversification program, only 97% of the Conservative Party's MPs are white, only 77% are male and a whopping 3% are openly gay.

(While 97% claim to be heterosexual, the party -- like the US Republican Party and the right-wing clergy -- contains a considerable number of closeted, self-hating homosexuals who lash out at gays at the drop of a beret. One leading spokesman got in hot water during the recent election campaign for forgetting the party's new public veneer of tolerance towards the LGBT community and announcing that he favored hoteliers being able to discriminate against gays. A few years ago another prominent Conservative was found dead in his mansion with a noose round his neck, a plastic garbage bag over his head, wearing a very fetching French maid stockings and garters set and a large navel orange stuffed in his mouth. His private lifestyle, apparently, was in contradiction with his Conservative public face. Not to mention his taste for frilly underwear and citrus fruits.) 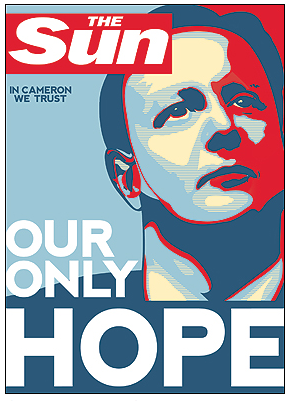