A stunningly horrendous car crash. A windshield smashed in by a wooden stump. A shard of white light cutting sharply through a smoke cloud which rises to eerily announce the arrival of UK street artists Miss Bugs in Brooklyn. In "Parlour," their first solo show on view right now in Bed Stuy, the backyard diorama is a plastered paper perimeter of gnarled and murky indigo off-road forest, a haunting backdrop to the cut-out distorted and riveting forms who break the fourth wall toward you with intent.

The curvaceous ladies are cousins of the street pieces Miss Bugs places with great care publicly, cut outs that fade into their surrounding and pop out from it, undulating, teasing and riveting, a perfectly charged counterweight of sex to the violent metal and glass carnage before you. Throughout the inside of Brooklynite Gallery and its backyard installation, Miss Bugs plays with a scale slightly larger than life, giving imperious and distantly cool figures a personal, almost intimidating immediateness.

The distortion of the forms and come hither standoffish-ness is softened and sweetened by saturated pop colors and cleverly patterned replications of art you have seen somewhere else. Always willing to take appropriation to new heights, Miss Bugs gladly incorporates signature elements of other artists' works into their distorted and sensuous forms, weaving them into the hair, tattooing them across the skin, wrapping their ladies with a body conscious-knitted brocade.

Speaking with the royal "we," the very anonymous Miss Bugs talked with Brooklyn Street Art about "Parlour:"

Brooklyn Street Art: What was the genesis for "Parlour" in general and this outdoor installation in particular? Miss Bugs: We wanted it to be a place that unsettles you... The concept of the 'Parlour' exploits the idea that the art establishment plays on people's desires, whether for money, beauty, sex or ownership. We've always looked at these themes within our work, so here we continue to question them. However, this time, we wanted to extend the ideas beyond the work and have the pieces viewed in their own theatrical space making us see the works' symbolism in a different, darker light. We place our own fictional characters in the middle of the space. 'The Madam' is here with her open eyes; to convey ourselves as part of this sometimes strange and seedy world.

The outside installation grew from the concept that the parlour is being protected by a few souls and that this can be a twisted place, full of contradiction... We suppose it's a nightmare or maybe just a bad dream! Comparisons can be made throughout the show between our 'Parlour' and the real world of the art establishment. Just depends how deep you want to scratch!

Brooklyn Street Art: How was it to install your work in Brooklyn this time around? Miss Bugs: It's great to show in New York especially Brooklyn, we love it... Just to spend time walking around soaking it all up is brilliant. Since we were kids we saw and heard Brooklyn in music, film and art, so it feels great when we're here and it always makes us feel at home!

Brooklyn Street Art: The imagery gives off sex, cars, alcohol... what are some of the messages you are working with? Miss Bugs: All these elements we try and show in a warped way; For example, placing glamorous but distorted nudes next to a burnt-out car, which hopefully makes us question our desires and see them differently! When we got the car into the gallery and we realised just how horrific a smashed up car is, it had a sadness about it which we hope we were sensitive to with our cut-out figures. The installation of the woodland clearing we wanted to be experienced at night to create a haunting and again unsettled atmosphere, but the smoke machine could have done this job by itself ...

Brooklyn Street Art: You borrow from different artists and other cultural art forms (including Shakespeare in one instance) and incorporate many of those images into your work. How do you go about selecting the images? Are they your favorite artists or is it purely aesthetic? Miss Bugs: The list of artists that we 'stole' from and remixed for this show is massive...Hannah Hoch and Kurt Schwitters, Keith Haring, Jean-Michel Basquiat, Vera Lehndorff, Gustav Klimt, Picasso, Mc Escher, Man Ray, David Lynch, Mel Ramous, Takashi Murakami, Leonardo Da Vinci, Banksy, Warhol, Stanley Kubrick.

We'll stop now but the list goes on! You have to look harder for some of them and others can be staring you in the face but sometimes still go unnoticed as they're seen out of context. Playing with ideas of how we view artwork and how much of its reasoning we understand.

We look at links between the artists and their working methods throughout history. Artists that would not normally be considered to sit alongside each other are then remixed together showing just how the working style of (for example) Keith Haring can gel together with Picasso, and how artists from very different periods in time and culture are using very similar approaches, often where you wouldn't expect to see it. 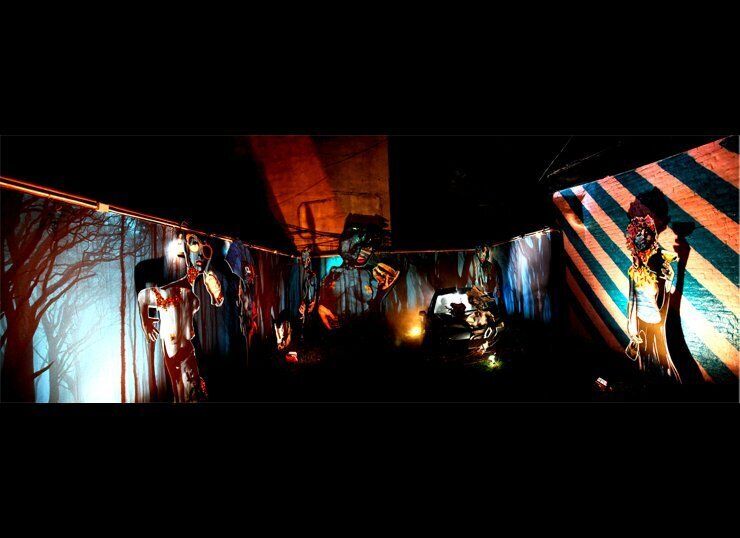