The long conflict between pro-Russian rebels and government forces in Ukraine has torn apart lives and forced disaster upon residents in eastern towns and cities. In addition to thousands who have been killed in the fighting, more than 1 million Ukrainians have been displaced inside the country.

A reported 60 percent of those forced from their homes are elderly pensioners. The conflict takes a special toll on seniors, less able to fend for themselves than younger people, and adds a tragic dimension to an immense humanitarian crisis.

"Older people I have met have told me that this conflict is worse than World War II," Stu Willcuts, Ukraine country director for aid agency Mercy Corps, told The WorldPost. "They talk about the relentless shelling and having to hide out in their basements,"

One pensioner caught by the conflict is 72-year-old Anna Dmitriienko. She was wounded and her house was destroyed by the shelling. Dmitriienko, now reliant on a neighbor for necessities like water and fuel, lives in a damp shack on what remains of her land.

"I don't know how to live or what to do," Dmitriienko told Mercy Corps. 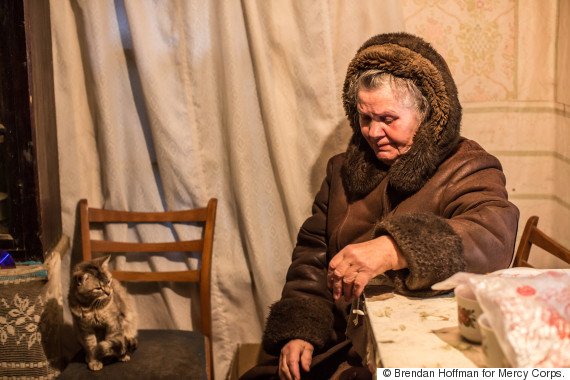 Anna Dmitriienko sits at her table in the village of Stanitsa Luhanskaya. (Photo: Brendan Hoffman for Mercy Corps)

The support structures to aid internally displaced persons in Ukraine are being stretched to the breaking point by the scope of the crisis, according to a United Nations report on human rights. The aid limitations can be worse for pensioners, who often need special care or aid, and who find themselves in a precarious situation in the conflict.

"Ukraine has an aging population who are tied to their homes and are less able to move to a different location even for safety, and more reluctant to leave everything they have behind," Willcuts explained in a statement. "This section of the population is being significantly affected and has far fewer options and coping mechanisms, and the length of this ongoing conflict is eating away at any savings they might have had.”

Some of the elderly have others who depend on them for survival. Nelly Chernikova, 70, fled from the shelling with her 40-year-old son, Igor, who is blind and has learning disabilities. Unable to work, they both rely on pensions and live in a hostel with other displaced families, according to Mercy Corps.

"I keep promising him that we will go back," Chernikova told Mercy Corps. "But we are also worried that we will not be able to leave again because of the fighting and we will be stuck." 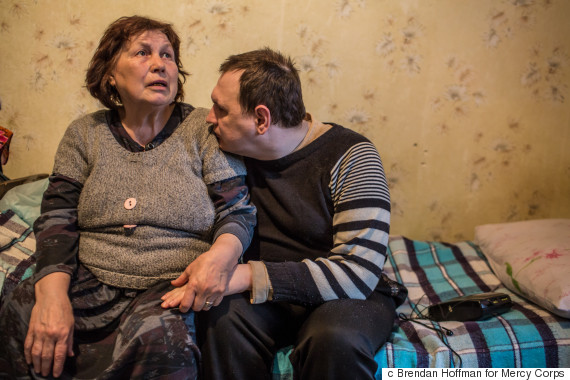 Nelly Chernikova and her son Igor at their hostel. (Photo: Brendan Hoffman for Mercy Corps)

International aid group Mercy Corps has been providing aid and assisted living in Ukraine for those in need. The group also has been collecting stories of those receiving help, adding a human dimension to the conflict.

Many have lost their land and homes, such as Maria Goncharova, 80, and her husband Mikahil, 75, who she calls Misha. The couple is now staying with relatives. Maria lives with trauma as the conflict has stirred from her painful childhood memories from World War II. Mikahil is living with schizophrenia. 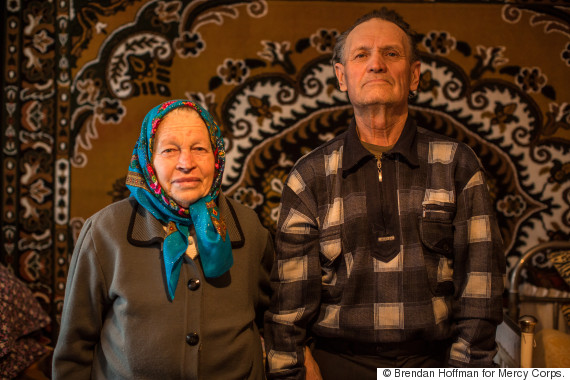