A majority of Americans support the Obama administration's current approach of the conflict between Russia and Ukraine, a new poll conducted in the U.S., Canada and Great-Britain found.

The three country poll conducted by Angus Reid Global found little disparity among the nations, with the majority of those surveyed in support of economic and diplomatic sanctions against Russia but showing little desire to involve their countries militarily in the conflict.

The survey also shows that Americans tend to evaluate their government's response to the crisis more according to political lines than respondents in other countries did.

Past Republican voters are also most polarized among themselves on what to do about the situation. While they are twice as supportive of NATO-led military action as past Democrat voters (19% to 10%), past Republicans are also slightly more inclined to stay out of the conflict than past Democrats (23% to 20%).

Another finding of the poll was that Americans considered the crisis in Ukraine a bigger threat than Canadians and Brits. While more than half of Americans surveyed said they viewed the situation as either a very serious or serious threat to global peace and security, only 44 percent of British respondents and 47 percent of Canadians voiced the same concerns. 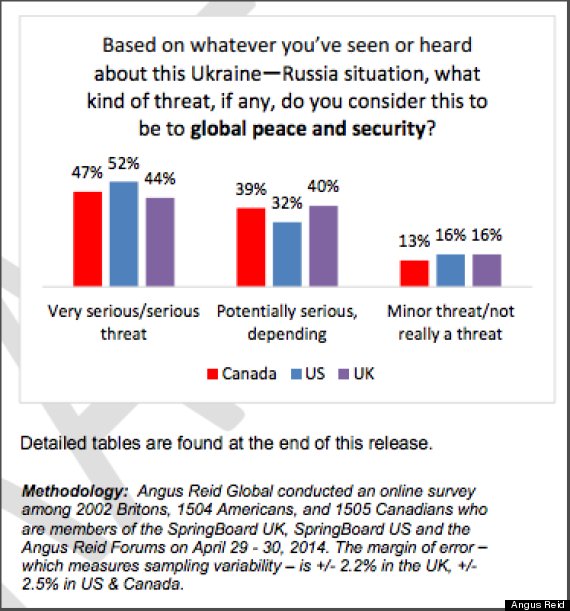 On Tuesday, Ukraine's interior ministry announced that at least 30 pro-Russia militants as well as four troops were killed during heavy clashes around the city of Slaviansk. It remained unclear when exactly the deaths occurred, but on Monday heavy fighting had broken out at a key checkpoint near the city.

Kiev also sent troops to Odessa, the city where more than 40 protesters died on Friday after heavy clashes between pro-Russia and pro-Ukraine protesters. The Associated Press reports that an elite national guard force could be seen patrolling the streets of Odessa on Monday.