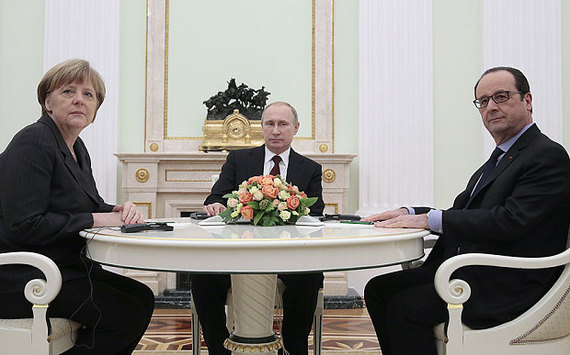 Ukraine has had several cycles on the diplomatic merry-go-round, but the only result is more weapons in the hands of the so-described pro-Russia rebels. There is another round of diplomacy planned this week, an initiative by the German Chancellor Merkel and French President Hollande. However, the early indication is that Russia's strongman Putin will make this another circuitous journey. He continues to arm the rebels, encourage their advances in violation of ceasefire(s), and then seeks to legitimize those conquests in his negotiations as new facts on the ground that cannot be reversed. Perhaps it would be wise to close our eyes for the moment and let him take his fill of Ukrainian land and resources. Problem is we don't know if he will stop before Kiev or for that matter even if he would go westward beyond Ukraine's borders. To the contrary, he has evidenced an insatiable appetite. His success only cultivates further appetites. He appears intent on rubbing American, European, UN and NATO noses in the nationalist fertilizer that keeps his ever more absolutist authority rooted in the Kremlin.

U.S. leaders are now debating whether to provide "lethal" military aid to the Ukrainian defense forces. No matter how you define weapons as defensive or offensive, they still kill other human beings. Of course, those people are ALREADY trying to kill you, your family, friends and country. This was a similar problem Bosnia & Herzegovina (BiH) faced two decades earlier. Denied weapons to defend its citizens as well as borders, BiH faced a genocide directed at its population and an assault upon its borders and sovereignty from an adversary already flowing with an almost endless source of weapons and the keen will to employ such in sieges and ethnic cleansing. As the BiH Ambassador to the UN and then Foreign Minister, I urged either defending the Bosnians/Herzegovinians or allowing arms for us to defend ourselves. For BiH, it was not about killing Serbs. In fact, many Serbs defended BiH and their Bosniak (Muslim) and Bosnian Croat (Catholic) neighbors. To this day, some of the greatest friends of BiH and allies of peace and justice are Serbians. Most Bosnians and certainly I did not see the conflict in ethnic/religious terms even as ultra-nationalist Serbs and their exploiters sought to make and define this into a religious war to rationalize the killing and destruction.

As then in the case of BiH, now some EU and U.S. leaders are reluctant to arm the Ukrainians, but offer no realistic diplomatic alternatives. The door for diplomacy should always be left open, but one must admit when it is not an alternative, at least for the moment, or perhaps may even provide the aggressor further confidence in fueling the conflict. Putin, as the Serbian despot before him, sees current efforts at diplomacy as indecisiveness and weakness on the part of the Euro-Atlantic family. In the conflict in BiH, some western leaders sought diplomacy as fig-leaf for their own impotence in fact waiting for the death of the country to solve the problem. Is this now their solution for the Ukraine conflict?

BiH was ultimately defended by its citizen-soldiers who exceeded expectations and blunted Serbian military and paramilitary advances despite being heavily outgunned. BiH's survival also frustrated some European and U.S. politicians who had been awaiting BiH's demise as the solution. They frequently resorted to blaming BiH as means to rationalize their inaction in the face of aggression and genocide. Even the International Criminal Tribunal for the Former Yugoslavia was borne out of the false equation that the promise of justice tomorrow for perpetrators would rationalize inaction today. Ultimately NATO in the air had to act together with BiH military on the ground to help deliver at least limited relief to BiH citizens, provide a new equilibrium and prompt a more sincere search for a diplomatic solution. (Unfortunately here diplomacy also has proven flawed in sidelining ultra-nationalism and aggression, potentially a similar result for Ukraine, but that is for another article. (Read: "Construction According to Putin's Model from Bosnia to Europe?")

An Assault Upon "Our Way of Life"?

Apparently the toughest question facing Euro-Atlantic leaders if they opt to arm Ukrainian defenders is what then. Russia's Foreign Minister Sergey Lavrov, and my colleague as UN Ambassador 20 years earlier, (See: "New Cold War on the UN Stage & Closing Curtain of 'We the People'") ventured to a Munich security conference to lecture that arming Kiev would be adding more fuel to the fire, of course as the Kremlin hierarchy has already been pouring into Ukraine enough weapons and men to consume all of the country. Some EU and U.S. leaders are afraid of becoming further vested with ownership of the "Ukrainian problem." Perhaps as American and European leaders warn that an AL-Qaeda or ISIS seeks the destruction of "our way of life," we should come to see the Putin danger similarly, but unchallenged he actually has the capacity to deliver on the threat.

Vladimir Putin is not waging his war merely against Ukraine, but also the values and premise of the EU, NATO and such institutions as the Council of Europe and OSCE which have been the foundation for security inclusive of Russia for several decades. Putin's objective is to assert a new imperial Russia beyond its previous commitments which would not merely be a natural challenger to the U.S. globally. Putin's Russia would also claim ever larger chunks of Europe, (as well as Central Asia), as part of its sphere of domination, including parts of SE Europe, Baltics, and Caucasus. All of Europe would become beholden to Moscow for its security, and then we are back to the days of the Iron Curtain and Soviet Union. The real question that Europe's and U.S. leaders need to answer is: "what then if we do not act to counter Putin's challenge in Ukraine?" There are no good choices in addressing the Ukraine war but perhaps the worst option is to assume inaction will not draw us further into conflict.