By Richard Balmforth and Pavel Polityuk

KIEV, June 4 (Reuters) - Ukraine's president told his military on Thursday to prepare for a possible "full-scale invasion" by Russia all along their joint border, a day after the worst fighting with Russian-backed separatists in months.

His address in parliament was one of the first times Petro Poroshenko has used the word "invasion" to refer to Russia's behavior since the start of a separatist rebellion in the east in which the United Nations says more than 6,400 people have been killed.

Referring to a 12-hour firefight involving artillery on both sides on Wednesday when Ukraine says the rebels tried to take the town of Maryinka, Poroshenko said: "There is a colossal threat of a renewal of large-scale military operations from the side of the Russian-terrorist groups."

"The military must be ready as much for a renewal of an offensive by the enemy in the Donbass as they are for a full-scale invasion along the whole length of the border with Russia. We must be truly ready for this."

In Washington, State Department spokeswoman Marie Harf would not comment on whether the United States sees signs of a pending invasion but warned Russia to refrain from further aggressive actions in the region.

The United Nations Security Council is due to meet on Ukraine on Friday, diplomats said.

Ukraine and its NATO allies have long accused Russia of sending weapons and troops to fight on behalf of separatists who control part of two provinces in its east. Moscow, which seized and annexed Ukraine's Crimea peninsula last year, denies its troops are participating in the fighting in the east.

A ceasefire has mostly held for the past four months, after the separatists spurned an earlier truce to launch an advance and seize more territory for their self-proclaimed state in what Russian President Vladimir Putin calls "New Russia."

The joint border stretches for more than 2,200 km (1,375 miles), most of it far from the area where there has been fighting.

Earlier, Ukrainian military officials said that five Ukrainian servicemen had been killed and 39 wounded in the fighting around Maryinka, which lies 23 km (14 miles) to the west of the rebel stronghold of Donetsk.

The rebels updated their own casualty toll to 21 dead - five civilians and 16 fighters - and blamed Ukrainian forces for indiscriminate shelling of populated areas.

The fighting went far beyond regular low-level skirmishing that has occasionally flared since the shaky ceasefire was brokered in February by the leaders of Ukraine, Russia, Germany and France.

The West and Kiev say Russia has failed to fulfill the terms of the peace deal worked out in Minsk, Belarus and say it must pull out its forces and stop arms deliveries to the separatists.

Moscow takes the side of the separatists, accusing Kiev's forces of ceasefire violations. 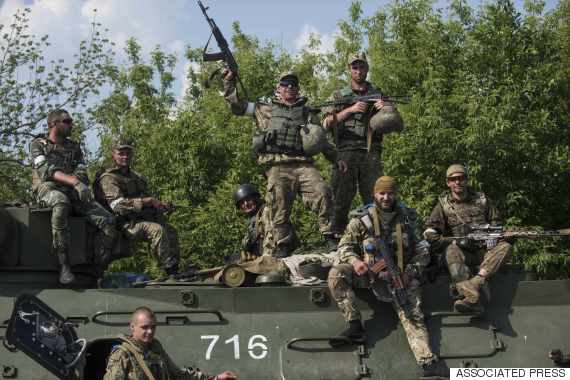 The Kremlin on Thursday accused Kiev of provoking new fighting with the aim of putting pressure on the European Union, which is due to decide on whether to extend economic sanctions on Russia soon.

"The Ukrainian side has taken steps to aggravate tensions many times in the past in the run-up to some major international events. This used to happen and we are seriously concerned now over the most recent manifestation of such activity," Kremlin spokesman Dmitry Peskov told journalists.

The European Union described the fighting as the worst since the ceasefire and said it risked creating "a new spiral of violence and suffering." It noted not only that European leaders were prepared to extend existing sanctions on Russia but said they were also willing to tighten them further.

In Washington, the U.S. State Department said Moscow had a responsibility to lean on the rebels to halt the fighting.

Concern over the military escalation in Ukraine caused Russia's rouble to weaken 1.2 percent against the dollar following a 3 percent fall on Wednesday.

Poroshenko, delivering his state of the nation speech, said 9,000 Russian servicemen were deployed on Ukrainian territory.

"The concentration of Russian troops near the state border is one and a half times greater than a year ago," he declared.

Reuters journalists have reported a Russian military buildup on the frontier in recent weeks, with thousands of troops and heavy weapons.

Poroshenko said Ukraine would increase military expenditure next year from its present unprecedentedly high level of 5 percent of GDP, he said.

A Ukrainian military spokesman said the situation near Maryinka remained "tense but stable" on Thursday morning.

"On three occasions the (separatist) fighters shelled our positions during the night. At the moment there is an operation going on to find sabotage and diversionary groups," he said.

Separately, the Ukrainian military said rebels had fired overnight at government troop positions outside the south-eastern port city of Mariupol, as well as on villages near Luhansk city in the northern part of rebel-controlled territory. 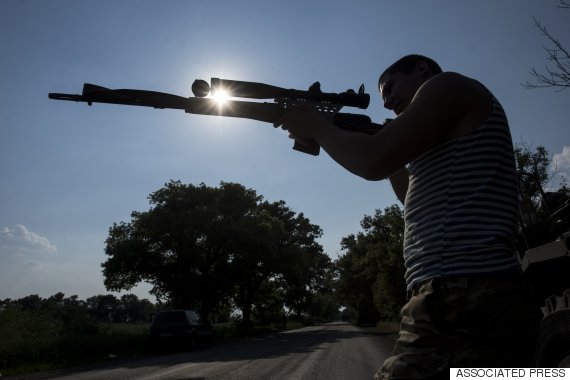 A Ukrainian soldier from the 25th airborne brigade looks through the optical sight of a sniper rifle on the outskirts of Marinka, Donetsk region, eastern Ukraine, Thursday, June 4, 2015. (AP Photo/Evgeniy Maloletka)