By Pavel Polityuk and Timothy Heritage

KIEV, June 13 (Reuters) - Ukrainian government forces reclaimed the port city of Mariupol from pro-Russian separatists in heavy fighting on Friday and said they had regained control of a long stretch of the border with Russia.

The advances are significant victories for the pro-European leadership in a military operation to crush the armed separatist rebellion that began in east Ukraine in April and hold the former Soviet republic of 45 million together.

"At 10:34 a.m. (0734 GMT) the Ukrainian flag was raised over City Hall in Mariupol," Interior Minister Arsen Avakov wrote on Facebook, less than six hours after the attack began on the city of 500,000, Ukraine's biggest Azov Sea port.

A ministry aide said the government forces stormed the rebels after they were surrounded and given 10 minutes to surrender. At least five separatists and two servicemen were killed in the battle before many of the rebels fled.

Mariupol, which has changed hands several times in weeks of conflict, is strategically important because it lies on major roads from the southeastern border with Russia into the rest of Ukraine and steel is exported through the port.

Regaining control of the long and winding frontier is also vital for the government because it accuses Moscow of allowing the rebels to bring tanks, other armored vehicles and guns across the porous border.

Avakov said the government forces had won back control of a 120-km (75-mile) stretch of the border that had fallen to the rebels, but it is not clear who controls other parts of the about 2,000-km frontier.

The rebels, who have taken over several towns and cities and want east Ukraine to become part of Russia, confirmed five of their fighters were killed in the fighting for Mariupol.

Avakov said National Guard and Interior Ministry units were involved in the battle, as well as special forces.

A Ukrainian defense analyst, Dmytro Tymchuk, said four Ukrainian soldiers had been killed and 31 wounded in fighting in other parts of east Ukraine in the past 24 hours. The death toll is not known but several hundred people have been reported killed in clashes this year in Kiev and the east of the country.

The rebels rose up in the Russian-speaking east and southeast after Russia annexed Crimea in March following the overthrow of Moscow-leaning President Viktor Yanukovich, who had triggered protests by spurning trade and political pacts that would have deepened ties with the European Union.

The new president, Petro Poroshenko, intensified the military operation against the rebels after he was elected on May 25 but is also trying to win support for a peace plan.

Rebel leaders have not responded to his suggestion they could be invited to talks if they lay down their arms, and rebels in the field have scoffed at the idea of giving up their weapons, saying they do not trust him.

Poroshenko's aides say progress has been made at initial meetings with a Russian envoy, and any immediate threat of a Russian invasion has receded, but talks on solving a natural gas pricing row with Russia have stalled.

European Energy Commissioner Guenther Oettinger, who is brokering the gas talks, said he hoped they would resume on Saturday.

The sides disagree over how much Ukraine should pay for its gas, and Russian state gas exporter Gazprom has threatened to turn off the taps to Kiev if it does not start paying billions of dollars in debts by Monday. This could disrupt supplies to the EU as it gets about half its gas imports from Russia, half of them via Ukraine.

But Oettinger said in Brussels: "I am optimistic the three parties will do all to avoid a disruption."

Political ties have also been strained by the appearance of several tanks in east Ukraine. Avakov accused Russia on Thursday of allowing the rebels to bring them across the border and Poroshenko told President Vladimir Putin by phone that the situation was "unacceptable."

Evidence that Russia is directly assisting the rebels militarily would implicate Moscow in the uprising, making a mockery of its denials of a role in the fighting.

Russia did not immediately respond to the accusations and it was not clear how Putin reacted to Poroshenko by phone. His country has already been hit by U.S. and EU sanctions over events in Ukraine and could face more.

(Additional reporting by Natalia Zinets and by Barbara Lewis in Brussels, Writing by Timothy Heritage; editing by Janet McBride) 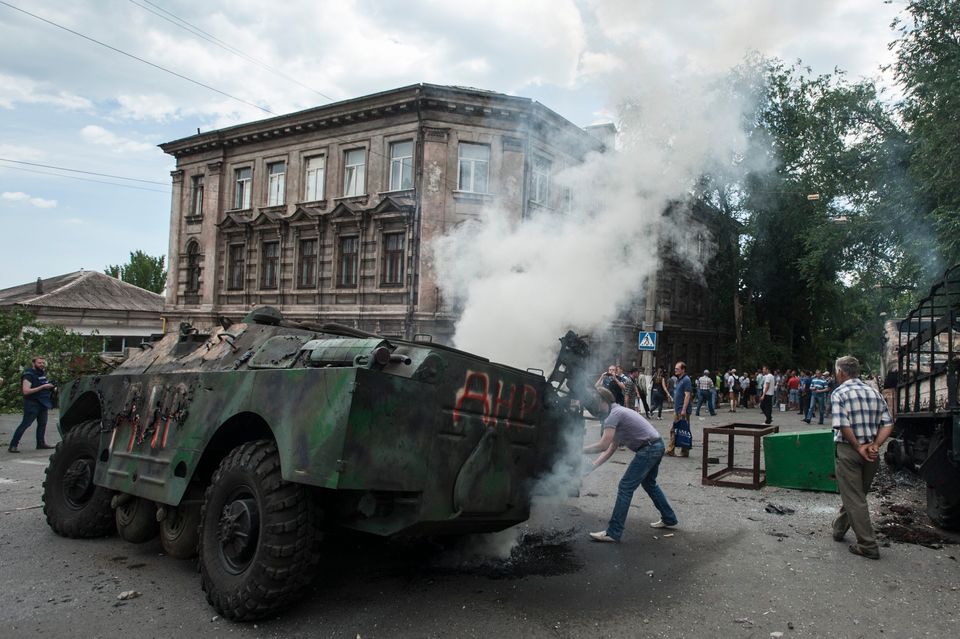