When Ukraine emerged from the fall of the Soviet Union in 1991 the world was cheering. Today, when Ukraine's independence is challenged, the world is getting annoyed that some petty border dispute disrupts the markets. Hence, some experts suggest giving Russia the disputed piece of land, in exchange for peace. If only it was so simple.

Often, Ukraine is compared to Poland. By looking at a chart compiled by Google from the World Bank data one can see that at the time of the Soviet system collapse GDP of Poland was about the same as in Ukraine (in current dollars, not adjusted for inflation). 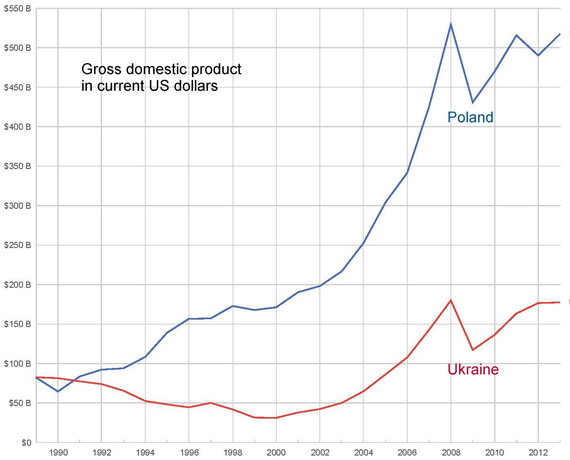 Today it is almost triple that of Ukraine. Looking at GDP per capita in constant 2000 dollars, one can see that when Poles got 2.3 times richer, Ukrainians became 20 percent poorer. 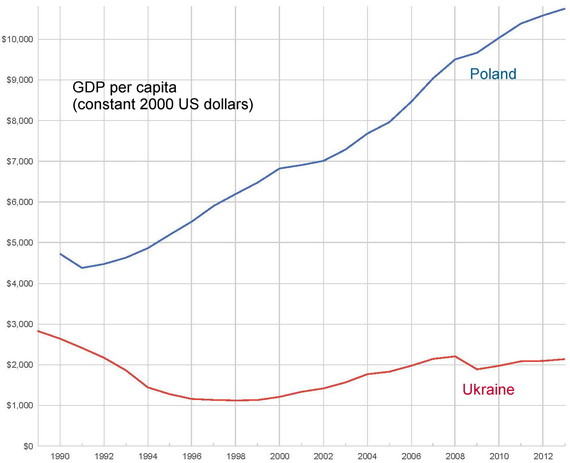 From afar one can conclude that Ukrainians brought the current misery on themselves, at their own fault, as they did not take advantage of new opportunities the same way as Poles did. If only it was so simple.

Poland was never as deeply integrated into the Soviet structure as Ukraine, and had a much more authentic political system than Ukraine ever had. Private enterprises were never completely nationalized, and in the 1970s and 1980s small business was growing, as the official economy was gradually disintegrating. Freed from the Soviet yoke, Poland had everything needed to take off. Ukraine, quite opposite, was completely unprepared to take advantage of the new opportunities. The chart below shows that the Polish economy was growing the fastest within the first 10 years after the system transformation; when at the same time, Ukraine's economy went into disorder. 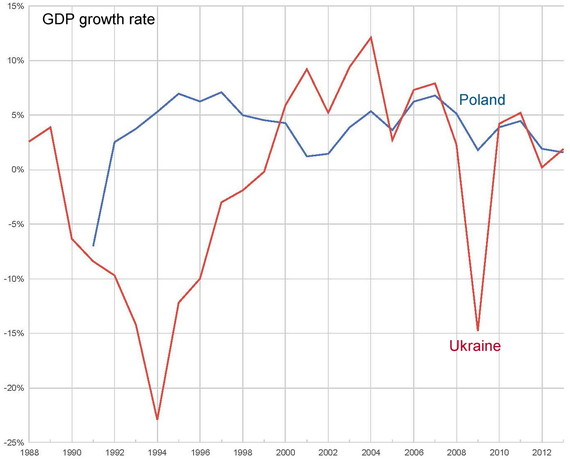 For the last several years, Ukraine's economy is rebounding. However, the recent recession hurt them much more than the economically stronger Poland.

The conclusion is simple; Ukraine needed a generational change in order to be ready to take full advantage of becoming independent. In the fall of 2013, Ukraine was leaning toward signing a cooperation agreement with the European Union, putting itself on the same path as Poland was about 20 years earlier. Days before signing the agreement, the Russian President stepped in claiming that this would be bad for Russia's interests. Pro-European orientation in Ukraine revolted, leading to the ousting of President Yanukovych. In response, Russia annexed Crimea and the armed insurgency in the Eastern Ukraine followed.

Shortsighted experts and commentators in the West naively believe that giving Russia one more piece of Ukrainian territory will resolve the problem. It would if this was the Russia's objective. For Russian leaders, Ukraine is considered in their political sphere of influence and strategically located for their economic and military interests. Economically strong Ukraine associated with the European Union is not acceptable in Moscow. By reading any article on the current Ukrainian crisis in the main Russian newspaper Izvestia, one can easily get an impression that for many Russians independent Ukraine is a freak of history, which needs to be corrected. In this view, the worse things are in Ukraine, the better it is for Russia.

On the day of becoming independent, Ukraine held physical possession (but not operational control) of about one-third of Soviet nuclear weapons and significant means of their production. Concerned with nuclear proliferation, existing nuclear powers: the Russian Federation, the United States of America and the United Kingdom -- applied political pressure on Ukraine to give up its nuclear arsenal and aspirations to ever have one, in exchange for: "Respect Ukrainian independence and sovereignty within its existing borders" and "Refrain from the threat or use of force against Ukraine." It is known as the Budapest Memorandum.

Now things start getting interesting as Russia, a signatory of the Budapest Memorandum, evidently did not respect Ukrainian borders by annexing Crimea. Also, it becomes evident that in the course of supporting East Ukrainian separationists, Russia directly uses its military force against Ukraine. The West responded with high pitch condemnations, economic sanctions and assurances that there will be no NATO military involvement in straightening the situation between Russia and Ukraine.

The world is watching. Belarus and Kazakhstan, for example. Also former Soviet republics, which also gave up their post-Soviet nuclear weapons. Both countries have a meaningful Russian speaking population, both are strategically important for Moscow and both are run by autocrats humbly playing the pro-Russian card. Economically, both countries are doing a little better than Ukraine, but both are due for political reforms if they want to match the success of Poland or former Soviet Baltic republics. Should they even try? Can the potential future benefits of these two countries joining the developed world outweigh the costs of economic sanctions imposed on Russia today?

Iran is watching as well. Iranians work on nuclear power, and despite their denials, everybody knows that besides electricity they want a bomb as well. The signatories of the Budapest Memorandum tell Iranian leaders that they do not need nuclear weapons as their "independence and sovereignty within its existing borders" will be guaranteed by nuclear powers. "Will it be the same as independence and sovereignty of Ukraine within its existing borders?" Iranians may ask.

Iran wants an atomic bomb because it is believed that Israel already has one. After the Ukrainian experience so far, can anyone convince Israelis that they should sign the Treaty of the Non-Proliferation of Nuclear Weapons and trust their independence and integrity of their borders on the piece of paper signed by existing nuclear powers?

China is looking as well, as it has disputes over a few islands with its neighbors. If Russia will be able to get away with intervening in Ukraine just by saying do not mess with us because we are a nuclear power, why shouldn't China try the same method in setting disputes with its neighbors? Noticeably, China did not condemn Russia for grabbing Crimea and supporting separatist militants.

The world order as we know it, and as it prevented a major worldwide war for almost 70 years, is based on the assumption that the greatest world powers act rationally and responsibly. It is based on the theory that the leading nuclear powers perceive maintaining peace and world order as imperative of their national interests. One might recall that both World Wars of the 20th century started because at least some powerful nations believed that their national interests were more important than maintaining peace, and because some of the leaders calculated that they could go unpunished by getting with war what they could not obtain by peaceful means.

One might notice as well, that in Ukraine, one of the leading world nuclear powers, for the sake of its perceived particular interests, under at least questionable pretexts, becomes an aggressor. When called on this breach of the international law and allotted trustworthiness, the president of this country reminded everyone that no one should mess with a major nuclear power. The world is waiting for the response. What will the exclusive club of leaders of the main worldwide powers say in reaction to one of its members bluntly misbehaving?

So far, within the last seven decades the world was able to avoid and curtail many wars. However, it is the first time that the aggressor endangering the world peace is the leading world power, the country that by the concept of our consensual world order should be in charge of maintaining peace. The world is waiting to see how it will be resolved.

Many people in the West try to rationalize the Russian aggression against Ukraine. The thought behind this is that after the fall of the Soviet Union the new political order in the region should be negotiated, and after some arrangements were made about 20 years ago, there is time for making adjustments. In particular, interests of Russia should be respected. In this aspect it appears logical that Ukraine should freely develop economic ties with both Western Europe and with Russia, but it should not be a part of NATO. In my previous text, I suggested that Ukraine giving up Crimea might be worth reaching a new agreement on a peaceful cooperation within the region. In similar approach, most of western politicians and commentators made an effort in avoiding humiliating Russia. It is a reasonable approach. After the crisis is resolved, we will all need to work together again.

Unfortunately, the respect given to Russia has been mistaken by Russian leaders as weakness. The message to Russia needs to change. The West still should tell Russia that Ukraine should not join NATO but only as long as Russia will restore Ukrainian sovereignty within its original borders and will refrain from interfering directly or indirectly in its internal affairs. Otherwise, Ukrainian aspirations to join NATO should be expediently satisfied.

In responding to Russian interpretation of the events in the Eastern Ukraine, the West should learn Russian, not the language but the political style. In particular, Russian leaders claim that no regular Russian soldiers are fighting in Ukraine, but it could be that some went on their own during their vacations. Russia should be assured that no regular NATO military units will be ever sent to fight in Ukraine, but that NATO trained soldiers might take vacations as well, and do whatever it takes to restore the territorial integrity of Ukraine.

In perpetual search for reason.