On March 13, Ukrainian military outposts were attacked 71 times by Russian backed militants in the fiercely contested Eastern region of Ukraine.

While this battle between Russia and Ukraine rages on, the headlines have slowed to a trickle. With all the other major conflicts and crisis in the world, not to mention a heated political season here at home, it's understandable that this seemingly contained conflict would remain below the fold in most news outlets.

But the world still needs to pay attention.

Even further, as Americans we should remain particularly invested in this war between neighbors as it provides a reflection of our own historical battle for freedom from oppression. This is a fight we cannot ignore.

It's helpful to understand a little about the history between Russia and Ukraine in order to truly comprehend the volatile nature of the current fighting. 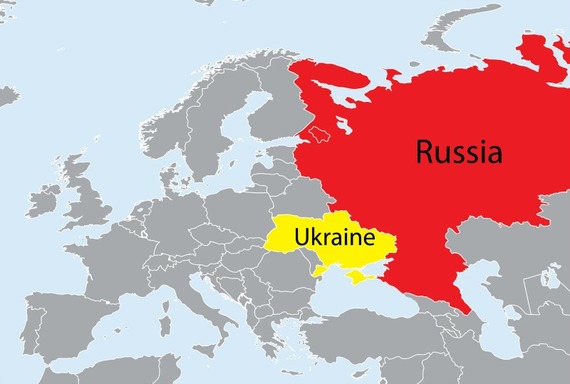 For over 1,000 years the two neighboring countries have existed in a rather tenuous state. Kievan Rus, the established capital of the East Slavic State, can be traced back to the 9th century when Scandinavian Vikings traveled from the north and settled in the fertile soil. Kiev became the capital and for four centuries, this was the dominant land of the Slavic region.

When the Mongols attacked, and defeated, Kievan Rus in the 13th century, power shifted to a northern town called Moscow, and the land surrounding Kievan Rus was sent into a spiral of trade, pushed and pulled from every direction, and in constant battle for her borders.

Known as "little Russia" by the czars, Ukraine became a nation without an identity, influenced in the West by the Austro-Hungarian Empire, and the East by Russia. The Ukrainian language was banned, the Church was suppressed, and the people were forced to do the bidding of their stronger neighbor to the north.

At the end of World War I, Ukraine fought briefly for independence, but the bid was short-lived. Outranked, they were grafted into the newly formed Soviet Republic in 1922. In the 1930's, when Ukrainian peasants attempted to fight off Stalin's formation of collective farms, mass executions were instituted, and a famine took hold which killed roughly 10 million people.

It was during World War II that the current tensions between Russia and Ukraine really began to ignite. When the Nazi's invaded Ukraine, many people initially welcomed them with open arms, hopeful that these Germans invaders would free them from Soviet oppression.

In the West, known as the Galicia district, guerrilla warfare ran rampant as fierce nationalists fought against both the Nazis and the Red Army in an attempt to finally gain their own independence.

Ukraine is a country that captured me as a young girl. Fascinated with the history and stories, I've spent the last twenty years studying the culture, the language, and the background of the Ukrainian people.

In 2003, I traveled to Ukraine for the fourth time, and I spent a month touring throughout the region, speaking personally with hundreds of World War II veterans along the way.

In my travels, I met a man named Oleg Dmitrievich who shared with me his memories of those dark years known as the "Great Patriotic War." When he told me of his experience fighting against the Ukrainian nationalists in the West, his face darkened, and his fists tightened.

"War is ugly," he said, tears gathering in the corners of his eyes. "It makes good men do terrible things. Freedom is a desire for all of us, yes, but shedding the blood of your own countrymen for freedom is a terrible task for any man to live with."

Technically a free nation since the collapse of the Soviet Union in 1991, Ukraine has never quite been able to break free from Russia. President Vladimir Putin has long kept the nation under his thumb.

With the annexation of Crimea, and the continual fighting in the East, Ukraine is a constant reminder to us all that freedom is never free. It comes with a price, and Ukrainians are paying that price with the blood of their countrymen - a terrible task, indeed.

As a country also founded on the blood of men who fought for independence from oppression, the plight of the Ukrainians should remain ever at the forefront of our minds. We must remember the struggle we faced to gain independence, the blood that was shed on our own land in the name of freedom, and we must willingly stand alongside those who are fighting for the same.

We must not forget.