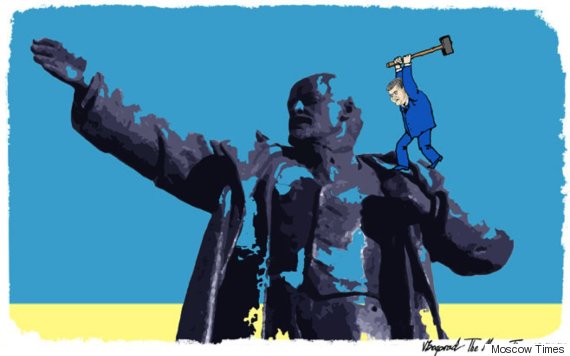 MOSCOW -- Ukraine recently adopted a raft of laws designed to strip the country of all reminders of its Soviet and communist past. What began as a haphazard effort to oust unwanted political opponents and tear down monuments to Vladimir Lenin and other communist leaders after the current regime came to power last year has now become a coordinated political course.

The "de-communization" of Ukraine should proceed at a breakneck pace -- that is, in true Soviet fashion -- and, according to Ukrainian Justice Minister Pavel Petrenko, must reach completion by Victory Day on May 9.

This suggests that the campaign is motivated not so much by deeply felt feelings as it is by the desire to spite Russia, just as Moscow is placing even greater importance than usual on celebrating the 70th anniversary of the Great Patriotic War.

One of the laws grants public access to Soviet-era secret police archives. Another grants new legal status to the "fighters for Ukrainian independence" -- a reference to those once considered "Nazi collaborators," primarily the people's army of Stepan Bandera. A third law bans the use of Soviet symbols, equally condemns both the Nazi and Soviet totalitarian regimes and prohibits the propaganda of either.

Most of the former Soviet republics have already undergone "de-Sovietization" in one form or another. In the Baltic states, the process even reached the point that it was called "overcoming the consequences of the illegal occupation" and set out to restore the states that existed between World War I and World War II.

The Russian-speaking population suffered as a result, enduring restrictions on some rights in Latvia and Estonia as well as getting branded as "invaders" and an ethnic minority obstructing the path to national identity for the small Baltic states as they joined with Greater Europe.

Similar processes occurred in the Central Asian states as well. However, for reasons of foreign policy expediency, Moscow chose to overlook those injustices, some of which were even more egregious than the cruel treatment of the Russian-speaking population in the Baltic states.

Ukraine, however, is a special case. This is not only because Soviet leaders parceled up its territory more or less arbitrarily -- tacking on the Donbass in 1918 and Ukraine's western region along with Galicia as a result of the Molotov-Ribbentrop Pact in 1939 -- but because Ukraine shared the distinction with Russia of serving as the backbone of the Soviet Union.

For its part, Russia did not attempt to extirpate its communist and Soviet past in the 1990s, even though all the prerequisites and necessary conditions were in place then. In my opinion, that was a major mistake that former President Boris Yeltsin and his group of reformers committed.

What's more, that process could have grown into a mass civic movement carried out not only from the top, as is now happening in Ukraine, but also from the grassroots, with greater involvement from society.

As a result, the Russian reformers have left the country still facing the task of overcoming the legacy of communism and totalitarianism. This has led to ideological confusion and made society unable to formulate a positive vision of its future, other than to imagine it as a replay of its "glorious" Soviet past.

But if leaders had "de-Sovietized" the country in the 1990s, it would be clear to what Russia could now return -- namely, to its age-old traditions that predated the Soviet era. But as for Ukraine, a country that first achieved statehood only in the 20th century, what can it return to now? Can it return to the myths of "Ukrainian-ness" that had taken tenuous form in Galicia in the 19th century?

The current authorities in Kiev have decided to follow a radical path by attempting to combine "nation-building" with Baltic-style "de-Sovietization." That is why, in Kiev, both Stalinism and communism are equated with fascism, and "de-Sovietization" is akin to "de-Nazification."

However, this is all happening at the hands of ruling elite that are direct successors of the Soviet-era Ukrainian elite. Now we will witness the widespread renaming of cities and streets, the destruction of Soviet-era symbols found in everything from movies to the bas reliefs on public buildings.

This "self-cleansing" -- and especially the opening of the KGB archives -- would be a welcome step if only it was sincere and a response to grassroots demand, and not dictated by the cheapest type of political cynicism. If it is sincere, the authorities will grant public access to the entire KGB archives, but if it is not, they will open only those parts that do not incriminate the ruling regime in any way.

By the way, such cynicism and insincerity is characteristic of the ruling elite in all of the former Soviet republics. As Komsomol members, they would zealously apprehend young churchgoers on Easter day, and now, a few decades later, they solemnly get baptized before the faithful.

There is no evidence that the majority of Ukrainians, unlike the people of the Baltic states, deeply disliked the Soviet system, or that they now like the fact that their leaders, in place of implementing long-needed reforms to stave off economic collapse, focus on playing these political games with Moscow.

Former Ukrainian President Viktor Yushchenko already made similar attempts, but his presidency ended ingloriously. Perhaps Ukrainian President Petro Poroshenko will make greater progress by taking advantage of the "hybrid war" with Russia. If so, he will feel compelled to first turn the "de-Sovietization" process into an anti-Russian campaign.

Second, he will try to cement his hold on power by suppressing all other ideologies -- including communism -- in favor of the dominant theme of "integrating with European democracy to spite Moscow." However, considering the enormous difficulty of that task, Poroshenko might yet end his presidency even more ingloriously than his predecessor.