As political unrest continues to threaten the peace in Ukraine, thousands of animals at one of the country's zoos are at the brink of starvation, an international conservation group announced this week.

The Lawrence Anthony Earth Organization, a nonprofit headquartered in South Africa, told The Huffington Post there has been a severe scarcity of food and medical supplies for the estimated 5,700 animals at the 104-year-old Nikolaev Zoo, located in southern Ukraine, since government funding for the zoo dried up a few weeks ago.

Starvation is also a looming threat for some of Ukraine's other zoo animals. The Earth Organization said this week that animals living in the private zoo on former President Viktor Yanukovych's lavish estate are also in similarly dire straits.

"While the private zoo quarters were found to be posh in the extreme, the animals will soon perish with no proper food supplies," the nonprofit said in a news release. 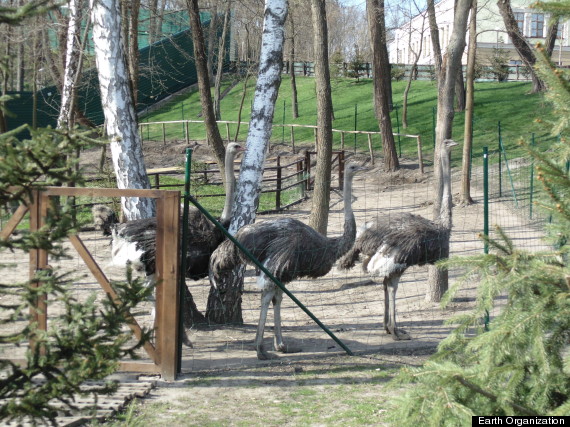 The Earth Organization has been raising funds and awareness about the plight of Ukraine's zoo animals since March. Wiseman says that about $40,000 has been raised throughout the last two weeks for the animals at Nikolaev Zoo and the Yanukovych estate. Volunteers have also been going door to door to collect supplies and food for the animals, she said.

But though the organization has been grateful for the response so far, Wiseman says the funds are just a fraction of what is needed to save the animals.

"We currently have enough money [to sustain the animals] for about 10 more days," Wiseman said, adding that her organization estimates that at least $500,000 is needed to cover the animals' most basic needs for the next four months.

That money would give the organization "breathing room to be able to work with the zoos' staff and create and implement new income streams for them," she said, adding: "Our purpose is not to just raise funds for zoos in crisis, but to help them get through this current crisis and then help them put in place self-sustaining systems."

This isn't the first time the Earth Organization, founded by famed conservationist Lawrence Anthony, has been involved in the rescuing of zoo animals from countries in crisis. In 2003, Anthony made headlines when he entered war-torn Iraq to save the animals at Baghdad Zoo. Sadly, by the time he got there, most of the animals had died. Still, he reportedly enlisted soldiers to help protect the remaining animals and did everything in his power to keep them alive.

"For those of you familiar with what Dr. Anthony had to deal with in Baghdad, you know how quickly things can get very bad," Wiseman said in the news release. "In just 9 days, before he arrived, that zoo went from 600 animals down to 35. Most died from starvation and dehydration."

So far, Wiseman says, none of the animals in the Nikolaev Zoo or the Yanukovych estate has met this sad fate; but she says there's no guarantee it'll stay that way.

"We are asking you to help us ensure that none of these animals die on our watch,” Wiseman said, per the release.