"With Ukraine, Russia is an empire. Without it, Russia is just another country." Before the current protests in Ukraine over relations with Russia, Ukraine had to fight to free itself from the Soviet Union. Official independence was declared August 24, 1991 and with it came its own host of problems. The United States was split between keeping the Soviet Union intact (and its reformist leader Mikhail Gorbachev in power), versus supporting Ukrainian democracy and self-rule. This ambiguity was highlighted by President George H.W. Bush's much-criticized "Chicken Kiev" speech, in which he warned against "suicidal nationalism." Eventually Washington decided to recognize Ukraine. 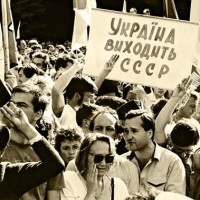 Jon Gundersen, Consul General in Kiev at the time, was interviewed by ADST beginning in April 2012. Read the entire account on ADST.org

Q: Was the ending of the Soviet Union sort of in the wind, did you see it at that time? GUNDERSEN: I did begin to see it when I went to Ukraine, in late '90. Initially there were just two of us, so I had a staff of one. By the end of my tour I had a staff of 80. We gradually got a sense that the Ukraine was going to go independent. We'd talk to Party leaders, dissidents, labor leaders, and members of the Rada [Ukrainian Parliament]. They were beginning to sense that the center could not hold.

[Ukraine] had a vote on sovereignty in March 1991, which was fairly overwhelmingly voted in favor of. This wasn't independence, it was still under sovereignty... in the Soviet Union, but because the vote was so overwhelming, you had a sense that they weren't going to stop there.

We started reporting about that, that there was a real movement for independence. Embassy Moscow didn't agree. The conventional wisdom in the Bush I administration was that we could work with Gorbachev; the thinking in Washington was, "Let's deal with the devil we know." Because we didn't have classified communications capabilities in Kiev, my colleague, John Stepanchuk, and I had to travel virtually every weekend to Moscow to write secure cables....Sometimes Embassy Moscow would put "We do not agree with this" in a comment on our cables. So there was a little tension there.

We weren't saying, "They will become independent," Foreign Service people don't make such categorical statements, but "There is a good chance that they will be pushing for more and more independence and we have to deal with this reality and have think about what our policy should be."

Would we recognize Ukraine's claim as an independent statehood? What are the criteria for recognition? How do we coordinate with our NATO allies, etc.

Q: What were the Ukrainians saying? Was there a Ukrainian government at the time that could easily split off and become an independent government, or was there sort of a creature of Moscow?

GUNDERSEN: Well, they had a leader named [Leonid] Kravchuk. He used to be the ideological secretary of the Ukrainian Communist Party, but he was a crafty character and saw the way things were going. So he became more and more independent; he quickly changed to a black Nationalist hat, and discarded his red Communist hat. Meanwhile, the Rada had elections and elected some Rukh [a Ukrainian democratic, pro-independence party] people.

Q: To my mind, if Ukraine goes, Russia's no longer a threat. Were we looking at it that way?

GUNDERSEN: I think that reflects exactly some of the discussion. The Pentagon's thinking, in the Office of the Secretary of Defense, was driven by military, not political objectives. If Ukraine becomes independent, the thinking was, Soviet forces would have to retreat a thousand miles from NATO and it would no longer be a strategic threat. And so they looked at it from a military perspective; they were less involved with arms control or other considerations. There were some in S/P, State's Policy Planning Council, who agreed.

Bush [the first] visited the Soviet Union in early August 1991 (it was still the Soviet Union) to work with Gorbachev, because they had come to the recognition, from their perspective, that they liked Gorbachev's reform policies. Bush was someone who placed great stock in personal relationships and he was comfortable dealing with Gorbachev.

Bush scheduled a trip to Kiev after Moscow. He was greeted by a million people in Kiev because he was seen as pro-democracy. The route was lined with people; it was a very joyous occasion. And he gave a speech to the Rada. He talked about democracy and self-determination and human rights and Ukrainian history. Not a bad speech generally. 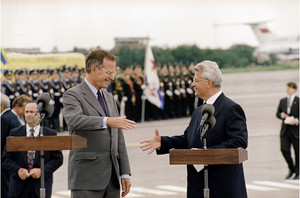 However, two things he said became famous: he warned against "suicidal nationalism" and said that "Democracy does not mean independence." So he was, in effect, telling the Ukrainians, "You can push for democracy, but not for independence."

I only saw the speech a couple of hours beforehand. I told the speechwriters: "This is going to go down really bad, because of these two lines." And those were the things that were picked up by the press. I think it was Washington columnist Robert Novak who called this speech the "Chicken Kiev" speech. The Ukrainian-American community here reacted very strongly and negatively to the speech as well. All the good things in the speech were soon forgotten....

Q: From your perspective, were you able to get out in Kiev and get a feel about what would happen? GUNDERSEN: I think we were given an unusual and almost unexpected degree of access, because this was a time when the Soviet Union was changing, Gorbachev was encouraging this more open attitude. Although obviously they didn't want to go all the way. Gorbachev believed you could have a reformed, more open, kinder society and keep the Soviet Union together.

Q: How about the Party, the Communist Party in Ukraine? Where was it coming out? The Party had always been very loyal to Moscow, very hard line, because they knew that many Ukrainians, especially Ukrainians in the West, were anti- Party, anti-Russian, so they needed to prove their loyalty to Moscow.

After Ukraine voted for sovereignty in the spring of 1991, it was clear where they were going. We started getting visitors like [Richard] Nixon, for example. This was a unique opportunity for a Foreign Service officer to sit down with a former president and escort him around for two days. Despite his obvious flaws, Nixon, even at 80, was a very sharp, realpolitik guy. We met with Kravchuk.

Kravchuk was a cynic, sort of like Nixon, who recognized they were kindred spirits. As much as anyone, Nixon probably foresaw what was going to happen regarding the breakup of the Soviet Union.

We also saw some of the dissidents. They were mostly intellectuals with little idea about governing. In front of Nixon, they argued about what sort of Ukraine would emerge, whether it would be along the lines of a Jeffersonian democracy- they were quoting Rousseau and Montesquieu.

And Nixon asked, "How do you run the government? Who's in charge? Where are your alliances?" And Nixon sort of turned to me and he said, "Goddamned intellectuals!"

At the same time, RUKH, the democratic movement we had been helping, basically took over the government in Kiev. I got a call from the head of RUHK telling me, "We know you're looking for a building to house your consulate. Would you like a building? And they offered us the Kiev Communist Party headquarters, which is the current U.S. Embassy there. So that's how we got that building.... 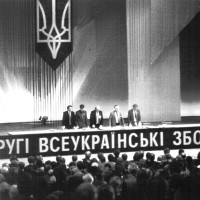 We did report a little about the corruption in the society, about the weakness in the democratic forces, about Kravchuk and the local KGB being interested in holding power and getting the fruits of selling state assets. But we didn't say, "Well, this is going to doom the Ukraine."

We actually reported something along these lines: "Ukraine has the potential to be a stabilizing force, because it's a rich country, it's got cultural resources, it's got a lot of smart people, and it has a strategic location..."

So we thought they would muddle through and they did muddle through, but obviously they've never developed into the type of... reasonable, stable country, as we had hoped.

We saw progress right after independence. Businessmen came to open hotels and to invest. But we began to hear that most of the officials were all on the take; you had to pay money to get things done, that a Ukrainian mafia was developing.

Here's this big country of 52 million in the heart of Europe, which, when it became independent, became the third largest nuclear power in the world, because of all the nuclear weapons on Ukrainian soil. And they were sister Slavs, "little Russians" they would say. So when Kiev declared its independence, we at the consulate wanted to recognize Ukraine right away.

Embassy Moscow wanted to check with the Soviets first. They delayed recognition to allow for meaningless things like getting our defense attaché in Moscow accredited to Ukraine. We felt these little things were both unnecessary and small ball as this was a historic moment. So when Ukraine voted for independence on December 1, 1991, in overwhelming numbers, the Canadians and Scandinavians recognized them right away, but NATO as an alliance was reluctant to do that as was Washington...

Secretary [James] Baker came to Ukraine- he visited it and the other newly independent states in January '92. He turned the policy around 180 degrees and basically declared: "Yes, Ukraine's going independent, obviously the Baltic Republics are and probably these other constituent Soviet republics are and we have to be ahead of the curve."

At the time we were negotiating bilateral treaties with Moscow which would allow us to control nukes more closely in Russia. However, there were forces in Ukraine, on both the right and left, who were saying, "Let's keep the nukes, they are how we will get respect as a new state, by having these nukes." Of course, the Russians were also pushing to get the nukes out of Ukraine.

There were also a lot of countervailing forces. There was a strong anti-nuke movement because of the reaction to the Chernobyl reactor explosion. At the same time, as I mentioned, some politicians believed that the nukes could give Ukraine legitimacy and perhaps great power status or, at least, that they could be used as a bargaining chip with the Russians. 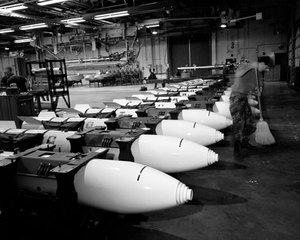 So we worked out what was eventually called the Lisbon Protocol in early '92. The Ukrainians agreed to get rid of all their nuclear weapons. In exchange they would get certain aid and would have a pathway to membership in international institutions. T

It was a point of contention about who controlled the Crimea. The Crimea had been Russian territory, but had been given to Ukraine as a gift by Khrushchev in the Fifties. Of course, Moscow could never imagine that control of Crimea would have be an issue, because the Ukrainian Communists were very loyal. It was just sort of an offhanded gesture.