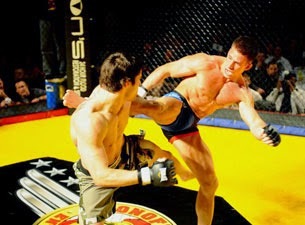 Prize fighting is a metaphor for life. At least it's one of the metaphors and it's probably the metaphoric quality that accounts for its popularity. The same can be said about mixed martial arts, a sport which takes place in cages (the Ultimate Fighting Championship is significantly the name of the company that promotes many of these events) and jiu jitsu. Of course other sports like football offer the same possibility for enticement through their potential to create empathy. How may times have you heard someone who is going to undertake a challenge refer to "carrying the ball?" But fighting requires an especially high level of preparedness and the combat is the most individual (outside tennis or mountain climbing) and brutal. You fight to the finish with a win sometimes rendering the opponent senseless. A prize fight is not like a cockfight since it's ultimate goal is not the death of the loser, but annihilation is certainly on the table. The victory exhausts the defeated party and breaks his or her will. But if there is an animal quality to fighting it also exhibits some of highest elements of the human spirit to the extent that it represents an aspiration of the consciousness to overcome bodily limitations. It's no accident that writers like Hemingway, A. J. Liebling, Mailer and most recently Joyce Carol Oates have all exhibited a fascination with boxing since those who are prone to articulate the lot of the creative artist frequently equate it with over the top challenges, which sometimes involve the sacrifice of life. Whether it's the marlin in The Old Man and the Sea or the great white whale in Moby Dick, the person who attempts to emblazon his inner life on reality faces a Herculean and sometimes Sisyphean task. The only difference between the fighter and the artist is that the battle the artist is waging is more solitary. His or her opponent is the self. But the whole fascination with fighting as a metaphor poses still other questions. Is all of life a battle? Should people fight for the things they want the way some patients fight against cancer. And is full-fledged combat the best way to fight cancer--or depression for that matter? Leni Riefenstahl's film was Triumph of the Will and it was a consummate piece of Nazi propaganda.