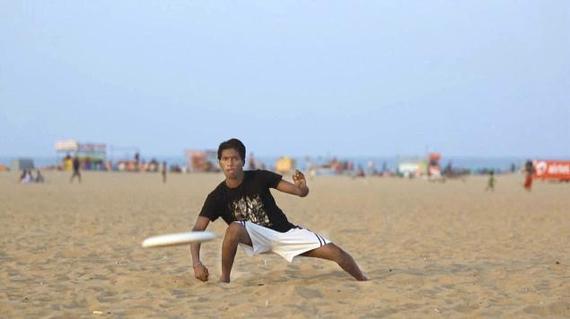 Father and son Robert and Ian Zeitlin team up - both as authors and on the ultimate frisbee field - to show just why Ultimate Frisbee is so special.
___

That was the slogan we printed on our frisbees and t-shirts every summer we played at Edgely Fields in Philadelphia's Fairmount Park. Spread the word, spread the love of the sport. It was an easy sell.

Ultimate Frisbee is a unique sport. Boys and girls play it together. You make your own calls (no refs). And it's easy to learn. In Philadelphia, we play most of our games in a secluded part of the park, so we hang out afterwards in the summer evenings, grill and drink beer, and build community. If you don't win your game, you can always stay later than everyone else and "win the fields."

A community has grown over the last three decades around Edgely, the home field for Ultimate Frisbee in Philadelphia. One small summer league has blossomed into a volunteer organization running dozens of leagues spanning all four seasons, three states, serving 2,000 players, and promoting the sport in high schools and the inner city. There are five million people playing the sport across the country.

Why does Ultimate breed like bunnies? In my experience, it is because it's a family.

I have three families: the one I created with my wife and kids, PADA (Philadelphia Area Disc Alliance), and CUT (Carleton Ultimate Team), my former college team. When my kids started playing Ultimate in middle school and high school, I already knew their coaches. They were the best players at PADA and wonderful, grounded human beings with whom I had played for years. We were family.

Next week, I am traveling across the country to visit with Rich Price, a man I haven't seen since he was a teenager. Rich is a brother of mine, in my CUT family. I helped recruit Rich when he was a freshman at Carleton, where the frisbee team has grown a reputation as one of the tightest families in the college scene.

Last year we lost three of our "sons" in a car accident en route to a tournament. Like all strong families, we pulled together around this tragedy. We created a memorial, raised money and hosted a reunion weekend with 200 plus players coming from every corner of the world. This tragedy put me in touch with Rich and others for the first time in over 25 years.

I have played Ultimate Frisbee for almost 30 years. I have had the most fun in my life out at Edgely, playing with PADA. But this summer might provide the highlight of my career when I get to captain a team where I can play alongside both of my teenage kids. The prospect of the three of us walking out onto a competitive field of play together promises to be one of the best moments of my life as a player and a dad.

My kids are independent and like to make their own choices. I taught them to throw a frisbee instead of a football or baseball.

I dragged my son Ian and my daughter out to my summer league games. I loved the sport so much that I was afraid I was being pushy and would turn them off. So I was dumbstruck to see him want to play Ultimate in high school. Then the same thing happened with my daughter, who started playing on a middle school team.

Now my kids love Ultimate. Why?

It's because of my frisbee family. PADA is where I raised my kids. It's where they learned to catch and throw a forehand. It's where they saw adults agree to disagree, taking responsibility for their own actions. It's where their high school coaches came from. It's where they flexed their wings, were free of coaches yelling at them, and found a place where they could still have fun playing a sport.

My story is not unique. My son and co-author sent me a link to a short film about Ultimate in India that won an award at the Sundance Film Festival. I am always happy to hear about good press for the sport but I was blown away to see the film highlight the community that Ultimate breeds.

The short film features a teenager in Chennai who was rescued from a bleak future by his teammates and coaches. They recognized that he was probably dyslexic but they encouraged and pushed him to study. I was in tears hearing his gratitude to his Ultimate family for helping him pass his high school exams. I know exactly how he feels. I am filled with the same gratitude to my Ultimate family for strengthening the bond I have with my children.

Ultimate is a sport I grew up with. My dad played it in college and passed it down to me at a young age. I grew up with a disc in hand on Edgely Field in Fairmount Park, where my dad played in the local league run by PADA. Growing up, we spent many afternoons out in our yard throwing a disc back and forth while talking about life; we still do occasionally to this day. There is just a different vibe around Ultimate than around other sports, embodied in the "spirit of the game," an unspoken code of ethics for all players. You play as hard as you want but only if you are having fun. That truly is the aim of Ultimate. I have grown up with the "spirit of the game" inside of me.

Now Ultimate Frisbee is growing quickly as a popular sport in India, highlighted in 175 Grams a winner of the Sundance Institute Short Film Challenge.

As the film says: "[Frisbee] can be played in open public spaces, making it easily accessible to everyone."

All you need to play is a disc and some friends. What sets Ultimate apart from other sports is its inclusivity, because in most games of Ultimate you are required to have both women and men on the field at all times.

Watching the film brought back a bit of nostalgia. I saw people with whom I have very little in common finding the same outlet and joy that I found in the sport. In order to compete as a player for Fly Wild, the team featured in the film, you must attend school and stay out of trouble. All the players interviewed said they were either going to college or were now working harder in school because of Ultimate and their teammates. Arun Kumar, a 15-year-old Fly Wild player said that he wants to continue his education and get a job in the government. That is exactly the power that this sport has. When something as simple as 175 grams of plastic can teach a 15-year-old kid from a bad situation to take what he has learned from the sport and to apply it to his life, you know something pretty amazing is happening.

Not only has this sport pushed its players to work harder in school and become more successful. It is teaching them something invaluable.

On the field you play co-ed, meaning the field is an equalizer of sorts. You are just as likely to see a female player throw down a massive defensive play against her male counterpart as vice versa. According to the National Crime Records Bureau 2013 annual report, nearly 25,000 cases of rape were reported in India. That number only represents the incidents that were reported. At the same time that their country is struggling with such hostility toward women, with one of the strongest male dominant cultures in the world, something wonderful is unfolding as well: Ultimate Frisbee.

Playing Ultimate in Chennai, with Indian men and women competing on an equal level, a message is being subtly conveyed. Ultimate is not a protest for equality. It is just doing its part. Ultimate creates this relaxed space where both men and women are competing with the same goal, together. To have this type of event happening in India is ground breaking.

My son, daughter, and I are playing together this summer. Maybe we will get to meet someone who played for Fly Wild, or played against them. Those are the kinds of connections you can make in Ultimate, a global family that supports personal growth. If Ultimate can help lift young men and women out of poverty in India, who knows what else this sport can do.

By Robert and Ian Zeitlin

This post was originally published on The Good Men Project