There are certain times in every man's life when he needs to prove to everyone in the room that he is richer, therefore better, than everyone else. Up till now, a man could do this with a certain set of flashy accessories -- an Italian sports car, a designer tuxedo, a gleaming set of bejeweled tooth covers -- but not with his cellphone. An iPhone is $200 on contract. The Galaxy Nexus is $300. Even the Constellation, an alligator-skin "luxury" phone by Vertu, is only, like, $5,000. A fine phone -- for your butler, perhaps.

But for you, something more refined.

Ulysse Nardin, the Swiss watch manufacturer, has released its Chairman smartphone, and "Guinness World Records" has already awarded it the title of "Most Expensive Mobile Phone (Cell Phone) Series." The Android-powered phone features a capacitive touch screen and number pad on the front, a mechanical watch rotor on the back, and a really, really high price.

The precise cost? Well, if you want the basement, low-rent model, it'll cost you about $14,000. For the premiere, deluxe Chairman -- featuring more than 3,000 hand-cut 17-karat diamonds adorning the faceplates -- that'll be about $130,000. Also, after you fork over the money, there's about a seven-month wait for the diamond Chairman, because over 700 man-hours go into cutting and placing all those rocks, and because of high demand.

Yes, that's right. High demand. Thousands of customers have already purchased the Chairman, and Ulysse Nardin can't keep this thing on the shelves (or, wherever it is they keep it. Probably behind some strong glass).

"Now, wait a minute," you might be saying to yourself, "Isn't the world economy in a slump? Who the heck is buying a six-figure cell phone? Can he write it off as a campaign expense?"

Nevermind the economic downturn. These phones are hot among the upper crust. Ulysse Nardin makes only 1,846 copies of each design (a tribute to the watchmaker's founding year, 1846). The first batch of Chairman phones -- a stainless-steel, midnight black model that shipped in mid-January -- is already sold out. That's rough news for Chairman buyers hoping to match the color scheme of their Ulysse Nardin wristwatch.

Bobby Yampolsky, CEO of Scientific Cellular Innovations, the company charged with creating the Ulysse Nardin smartphone, said many of the initial buyers were doing just that. Early customers included those who already own multiple Ulysse Nardin wristwatches and want to ensure their smartphones and wristwatches never clash.

When Ulysse Nardin first showed off its Chairman prototype at the Baselworld 2008 wristwatch convention, Yampolsky told The Huffington Post, the company expected 300 to 400 pre-orders, given that the markets had just crashed and the economy was in the dumps.

Ulysse Nardin left Baselworld 2008 with over 8,000 pre-orders. What crisis?

Yampolsky said most Chairman buyers have come from two places: Eastern Europe, especially Russia, and the United States. Several customers have ordered multiple units -- they want a work smartphone, a phone for going out, a weekend smartphone, etc.

So what, besides its existence as an economic signifier, is so great about the Ulysse Nardin Chairman?

Let's talk plain, old tech specs: The Chairman is a GSM 3G phone, with 32GB internal memory and a 3.2-inch touch screen display (made of sapphire crystal). It runs a specially designed version of Android Gingerbread and has an 8-megapixel rear-facing camera with flash. It comes preloaded with Android apps for Gmail, Facebook, YouTube, and Google Maps (in case that incompetent chauffeur of yours gets lost, presumably).

After the stock specs, however, things get fancy-shmancy. All Chairmans feature a thumbprint reader on the front of the phone for custom unlocking. All Chairmans come with physical numeric keys, like you would see on a landline phone, making it what Ulysse Nardin calls the only Android phone with a physical numerical keypad. A fancy desktop box also ships with each Chairman -- fine lacquered wood with two Bluetooth-ready speakers for music and conference calls. It has room for a dock that charges the battery and multiple shelves for storage of international charger adapters.

Due to popular demand, these desktop docks are sold separately, as several Chairman owners indicated that they would like multiple docks for their multiple offices -- home, work, vacation homes and elsewhere.

The defining element of the Chairman -- its Siri, if you will -- is its back plate, which features Ulysse Nardin's trademark mechanical watch rotor. The phone also has a crown on the side that can be wound like a mechanical watch to supply the phone with backup power. The Chairman mainly charges through a micro-USB. Winding the rotor simply adds a little juice. Yampolsky pointed out that this visible mechanical rotor lets everyone around you know that you're using a Ulysse Nardin Chairman. It is especially visible when you are making a phone call.

Here's a video from Ulysse Nardin and Scientific Cellular Innovations highlighting the design of the Chairman:

"We tried to create something totally unique, a luxury -- a toy for boys," Yampolsky said, adding: "It wasn't long ago that the watch became a status symbol. Now we think it's time for a cell phone to become a status symbol.

Ready to buy? Got tens of thousands of dollars burning a whole in your hand-stitched trousers? Head to the Ulysse Nardin website to check out which Chairman smartphones are available and pre-order one. Or you can jet down to one of the two Ulysse Nardin retail stores in hte U.S., both in Florida. If you can't make it to the Sunshine State, check out photos of different models -- including the $130,000 special Diamond edition -- below: 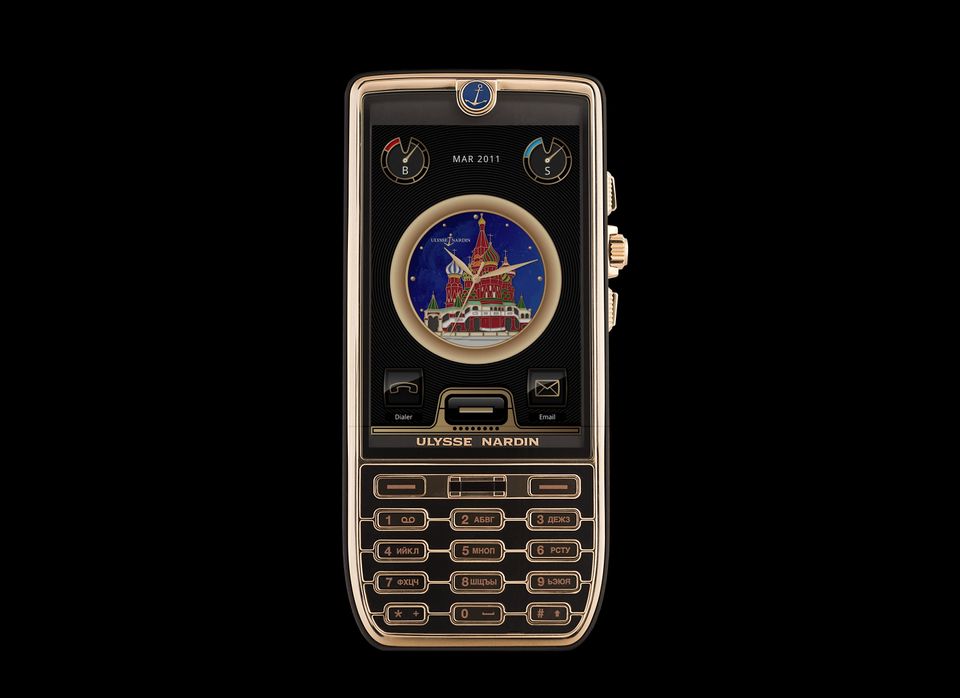