"You’re sitting on the perfect couch to be talking about it," Uma Thurman told me when I plopped down across from her at New York City's Crosby Street Hotel to discuss Lars von Trier's controversial new sex drama, "Nymphomaniac." The couch in question is fire-engine red and made of velvet, and yet even it's a bit too proper for a movie as explicit as this one. None of the sex scenes are tame, and very few feature anything remotely as elegant.

"Nymphomaniac" has seen a yearlong media blitz involving porn doubles and a series of salacious clips, none of which adequately prepared audiences for the rich comedy that von Trier's two-part epic boasts. Some of that ironic humor stems from Thurman, who appears in one lengthy scene in the film's first installment, and provides "Nymphomaniac" with its most electrifying performance. She plays Mrs. H, whose philandering husband leaves her and their three children for the titular sex addict, Joe (Charlotte Gainsbourg and, as a younger woman, Stacy Martin). Mrs. H storms into Joe's apartment after her husband moves out, kids in tow, becoming more and more erratic as she insists on showing the children the "whoring bed" that led to their father's departure.

Thurman had a lot to say about working with von Trier, whose name is synonymous with controversy, as well as the latest on a potential third volume of "Kill Bill," what "Batman & Robin" has to do with the queer-rights movement and why Pope Francis should be a saint.

Did Lars seek you out for this role in particular?
Yes. We met on the telephone, and I’d actually just had my daughter. My baby daughter was 3 weeks old, and he asked me to come and play this role. I’ve always wanted to work with Lars von Trier, and I think he’s an artist who’s only getting better actually. And he’d already started at a very high point. He’s totally far out and misanthropic, but I loved his last movie.

“Melancholia”?
Yes. It was artistically and visually mind-boggling. And so we met on the phone, and I hadn’t been acting, obviously, because I’d had a baby. I wasn’t going to be acting anytime soon. But I read this incredible seven- or eight-page monologue scene with this great artist, and I thought this is a perfect thing for me to do to remind myself about everything I love about acting. I had a feeling it would be a very fulfilling scene to play.

Do you view this movie as the script that pulled you out of that hiatus?
Yes! And it’s actually the only thing I’ve done. It looks like I’m going to start a film, “American Ultra,” which is very funny and cool and not a straight drama like this. This was the one piece of work I did, and it was everything I could have dreamed of. So many times you hear about the way people work and then you meet them and find it’s very different. But what I’d hear about his style of filmmaking -- the Dogme style and the long takes and the real time and the naturalism and humanism that he allows in the process -- is exactly true.

Your character's behavior is, understandably, quite erratic. Were you aware of how humorous the scene would become?
I think it was written basically as a seven-page monologue where someone walks into a situation with three children and no one really speaks to her. But she won’t be dismissed. She’s searching for some type of explanation or some type of epiphany of why her life is being destroyed. And it isn’t obvious to her at the moment. It seems obvious and then the obvious changes, and it was an incredibly interesting scene to play because it turns and twists and turns and twists. I forgot your question, I don’t know if I answered it.

The comedy.
Oh, but the comedy is so honest. There’s this man, and this woman has built a life with him -- 15 years with him. Maybe 10, I don’t know -- the eldest child was playing around 10 or 11. And the idea that your partner is throwing away all that you have, and then encountering this young, cold, indifferent woman and then the absurdity that he’s a fool. Not only are you having your life destroyed and your man taken away, but he's such a fucking idiot.

It gives you an ironic upper-hand that way.
As they say, the punishment is built into the crime.

Were you relieved that you weren’t going to be subjected to the explicit sex scenes?
No, I was really disappointed. I was incredibly disappointed. All I wanted to do was to get back to the oldest professional in acting, which is a lot of onscreen explicit sex. [Laughs] Although, in deference to the other actors, I will say that I believe there were stunt sex acts that were somehow ingeniously melded into their bodies and faces. So, to set the record straight, I don’t know exactly what took place. I saw a scene or two that was going on.

You saw it being filmed?
Yes, I saw some things.

But only scenes using doubles?
I won’t talk about it. [Laughs] It made me blush.

It's been 10 years since "Kill Bill: Vol. 2." Where is Beatrix now?
She’s living happily with her daughter.

Is she associated with the Deadly Viper Assassination Squad?
I can’t tell you much more than that, and she may live there happily for a very long time. But Quentin [Tarantino] always said she was living happily.

Do you and Tarantino discuss the character? There’s been talk of Vol. 3.
There’s talk of it, there’s talk of not doing it. It hasn’t been written, as far as I know. So it may never be done, and it also may be done. That’s the wonderful thing about an artist like Quentin; they’re highly unpredictable. I almost think people want to see Vol. 3 so badly that it makes it less of an incentive for him to do it.

Are you interested personally?
If we were to do it together, it would be awesome because it would only come about if it was meant to be. He’s one of my oldest friends, and I love him. And I think his creative process is amazing. And when you’re really, truly someone’s friend, that’s all that matters. I wouldn’t want him to do it unless it was really a burning thing that he had to do. It would only be worthwhile when everyone gives up on wanting to see it and I’m, like, 62.

That’s when he’ll call on you, when you Beatrix is old and finally decides to rejoin the assassination squad.
Yeah, he’ll be like, “I have a great idea for this 62-year-old woman.” Who knows? I’m just saying Quentin is not the type of artist who does what he’s told. So I don’t expect anything.

See, now I have a whole other idea of what Vol. 3 should be. It should be you at 62 and Beatrix returning to her assassinating ways, or not.
That might be the truth. Or not! Or just have a really bad time.

I was a kid when "Batman & Robin" came out, and I worshipped you as Poison Ivy.
So you must like Mae West? Because what I did was take Mae West and played with it.

Did you know at the time how notorious its reputation would become?
What is it notorious for?

For being campy.
Well, it came out in a different time when people were still being bitchy about campy. Humor being campy and campy being a code word for gay has changed. I think one of the most beautiful things I will get to say I’ve witnessed in my lifetime is to have lived through part of the major movement of trying to quell persecution of human beings who have a different sexual orientation. If you think of the Berlin Wall coming down, people always talk about all these big things. I think what Pope Francis did 10 days ago, which people have just talked about in hushed voices: “Oh yeah, you hear the pope said that?” -- I’m not Catholic, but I have to tell you, to me, Pope Francis should be sainted for this, what he did for mankind. For the millions and millions and millions of people on the earth who have died because of who they were. God, you just got me. So anyway, the word “campy” has nothing to do with “Batman & Robin”; it just somehow made me think of this. Obviously the Batman movies went in a very serious direction, a very humorless direction. Really straight and hardcore.

Absolutely. They’re beautiful movies, but they’re not the same ones that Tim Burton and Joel Schumacher were making.
Oh no, they’re totally different: hardcore violence. And I like them. But I think at the time the idea of taking a male superhero and having fun with it and someone using the c-word [campy] on it caused people to be very nasty. And that kind of nastiness was acceptable on those terms. And I think that’s the reason some people were particularly annoyed. They didn’t like seeing that tone applied to their heterosexual male icon.

That’s an interesting perspective on it.
Well, it takes time, and the idea that that wasn’t appropriate was because there was a deep-seated discrimination at hand, and hatred and fear. So what Joel did was actually very threatening at the time, and I think it is truly one of the things that we should all feel -- and me as a person -- is beyond greater than the Berlin Wall coming down. Far more thousands or millions more have died under that discrimination and those biases and those scriptures being interpreted in such a cruel manner compared to those who died coming out of East Germany. Anyway, this is very serious.

It is. If someone were to play Poison Ivy in a Batman reboot now, who should it be?
I have a problem where, whenever I want to say a name, it blacks out. She’s the most famous girl ever.

Jennifer Lawrence?
No. Well, she’s wonderful, I just watched her last night. I love her acting. No, I have to call you. When I’m interviewed, I go blank on names. Oh! Scarlett Johansson!

That’s a great one.
Sorry, I can’t believe this. Every time people ask me to say a name when I’m being interviewed, I just black out. Scarlett Johansson would be fabulous. It’s a must.

"Nymphomaniac: Vol. 1" is currently available via on-demand services. It opens in theatres on March 21. "Vol. II" opens in April. 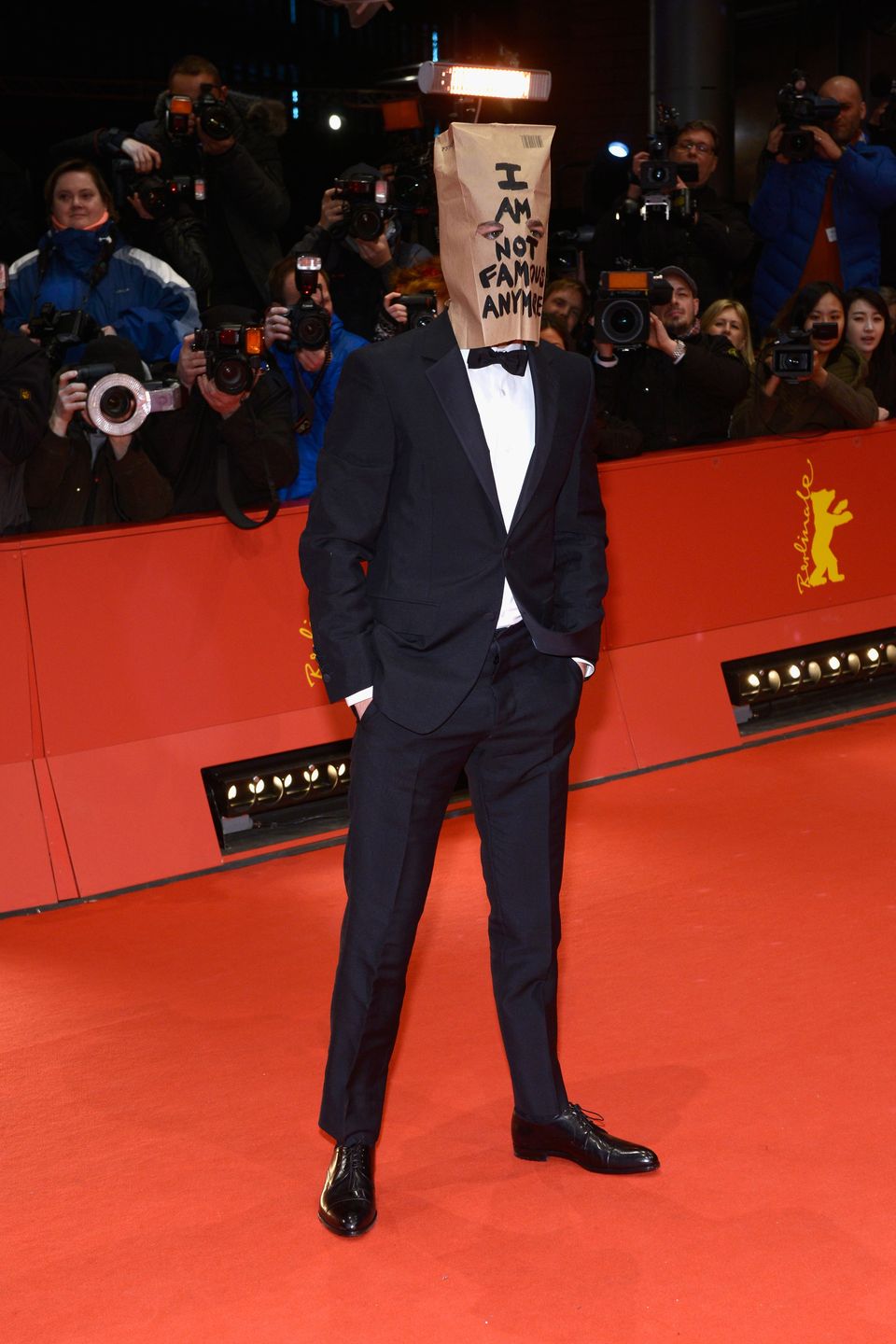