When Chicago's tourism organization excitedly announced an "ode to the city" Thursday, they were probably not expecting it to make the Billboard charts -- but they probably didn't anticipate a lot of backlash, either.

"Chicago," which was recorded by Umphrey’s McGee, Buddy Guy and the band Chicago was revealed by tourism organization Choose Chicago on YouTube Thursday. When A.V. Club Chicago picked up on it, Facebook and Twitter users in the city and beyond collectively laughed.

The A.V. Club slammed the "middle school poetry contest"-style lyrics, and the "stupid, blaring horns," but mostly, the whole thing baffled them:

More than anything, though, we wonder: Is this the song we want to represent our fair city? It’s retro at best, and says nothing about the vibrant, bustling, gritty metropolis we are now. Even the bands were a dumb choice to begin with.

After glancing at the lyrics, it's hard to disagree:

See the buildings as they climb into the sky
Where the champions aren't yours because they're mine
All the reasons why we're second now to none
I can tell you but you'll find them in Chicago....

Check out the rest of the lyrics here.

What did Chicagoans think about the tune? Check out our slideshow for a sample, and let us know what you think in the comments. 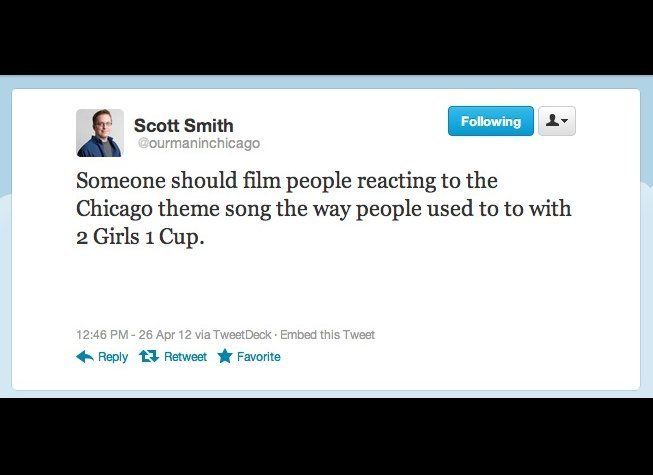