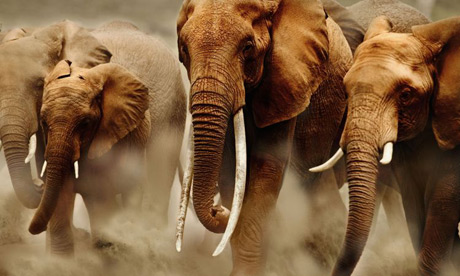 Beginning on Saturday, the world's nations will meet at the Convention on International Trade in Endangered Species (CITES) in Doha, Qatar to consider lifting an ban on ivory trade that would permit one-off sales of stockpiled ivory. There's a lot at stake at this convention; if the UN ban is lifted, endangered African elephants could be wiped out.

According to Samuel LaBudde, a biologist with the Environmental Investigation Agency,

Every time CITES approves an ivory sale it translates into an open hunting season on elephants across Africa and a death sentence for tens of thousands of protected elephants. It would be a tragedy for elephants and a travesty of conservation principles for CITES to approve Tanzania and Zambia's applications to downlist protections for elephants. 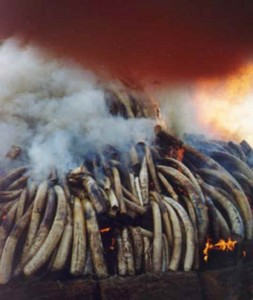 Both Tanzania and Zambia have put forth proposals to CITES that would allow each country to a one-off sale of their ivory stocks. That stockpiled ivory equals about 112 tonnes. These proposals have been made despite the fact that intensive elephant poaching and illegal ivory trade occur within both countries.

What does a one-off ivory sale mean for the ivory trade and conservation in general? The last time a one-off ivory sale was permitted by CITES was in 2008, when Botswana, Namibia, South Africa and Zimbabwe were allowed to sell a total of 108 tonnes to China and Japan. In the following year there was a global surge in the level of seizures of illegal ivory, with Tanzania responsible for almost half of the total 24 tonnes captured.

In fact, from 2008 to 2009, illegal ivory seizures doubled, the poaching death rate of elephants grew to nearly 10%, and the price of ivory ballooned to record levels.

Those increased death levels have a tremendous effect on a species that is already endangered. To raise awareness of the issue, and add to the scientific data in support of protecting elephants, a group of conservationists created the Elephant Ivory Project (EIP). The expedition, which will take place in the fall of 2010, is focused on pinpointing ivory poaching hot spots, aiding innovative elephant ivory forensics programs, and creating educational media to build public and political will to stop the illegal ivory trade. According to Trip Jennings, a team member of EIP,

Across the world's cultures and throughout our history elephants have been revered in religions and have captured our imagination -- Babar, Dumbo, Ganesh, Airavata, Erawan. But today these beautiful and highly intelligent creatures are being annihilated... As long as there is demand for ivory, elephants are at risk from poaching and smuggling -- but this week we have a chance to help stop it.

Many African countries and conservation groups are currently standing firm to uphold the ban, but they need our support. You can take action by signing this petition to save elephants and stop the bloody ivory trade. The petition calls on the nations of CITES to extend the ban for at least 20 years.

As the meeting in Doha unveils, global public opinion could tip the scales, and it's imperative that we all voice our opinion in support of this endangered species.