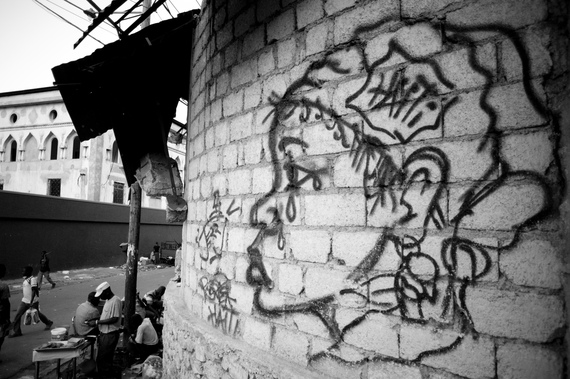 Graffiti on the street in Petionville, Haiti. Photo by Ben Depp, used by permission.

In a recent article, Pedro Medrano Rojas, the UN Senior Coordinator for Cholera Response in Haiti, called on the international community to change course on its "historic lack of attention to water and sanitation" in Haiti by increasing support for water and sanitation infrastructure to combat the cholera crisis in Haiti.

This is a welcome call -- cholera has killed over 8,824 people in Haiti since it was introduced by UN peacekeepers in 2010, and water and sanitation is critical to curbing transmission of the disease. Thirty-eight percent of the Haitian population lacks access to improved drinking water sources and only 24 percent has access to improved sanitation. As Mr. Medrano notes, "[b]y strengthening these infrastructures, we will eliminate cholera and also other waterborne diseases." Doing so has the potential to save several thousand lives each year.

Yet Mr. Medrano and others' persistent efforts and laudable goals of eliminating cholera in Haiti have not borne fruit. In 2012, the UN and Haitian Government launched a joint plan to eliminate cholera from Haiti. Two years later, this plan is still only funded at 12.9 percent despite a high-level donors conference hosted by the World Bank in October 2014 and repeated calls to action. Even the UN itself has only pledged 1 percent of the required funds for the plan. Over that same period, it has been able to raise over $2.5 billion to support MINUSTAH, its peacekeeping mission in Haiti, even though the country has not had a recognized war in a century.

Mennonite Central Committee is part of a broad network of Haitian and international organizations advocating that the continued lack of success means a shift in approach is both necessary and urgent. The UN must reframe its appeal for funding from one of charity to a matter of justice.

The UN has an obligation to support Haiti in the cholera elimination effort; overwhelming evidence shows that the UN introduced cholera to Haiti in 2010. The disease, not seen in Haiti in over one hundred years, was brought by peacekeepers stationed on a UN base that leaked untreated human waste into Haiti's largest river system. The river was and is still relied upon by Haitians as a primary source of water for drinking, bathing and farming. As noted by Dr. Louise Ivers with Partners in Health, "the United Nations has a moral, if not legal, obligation to help solve a crisis it inadvertently helped start."

Shifting the conversation from charity to justice would force the UN to do what people, businesses and governments throughout the world do all the time -- reorganize their priorities to make sure that they comply with their legal obligations. In Haiti, this would put an end to the cholera epidemic. It would also make important strides towards rebuilding the UN's credibility with the Haitian people and put needed pressure on Member States to fund the cholera elimination plan.

Numerous public officials, including UN human rights experts and members of the U.S. Congress, have stressed that UN accountability is essential to a lasting solution to the cholera epidemic in Haiti. As researchers at Yale Law School and School of Public Health pointed out, "remedies are not simply charitable approaches to a humanitarian crisis; they are what the UN must do to fulfill its contractual, legal and moral duties." This past December, 77 members of Congress sent a letter to UN Secretary-General Ban Ki-moon urging him to act immediately in respecting cholera victims' right to a remedy, noting that "[e]ach day that passes is a tragedy not only for the cholera victims but for the UN itself."

These voices underscore how critical it is to frame this crisis as a matter of justice -- with fundamental human rights at issue -- and not as a matter of charity. Securing water and sanitation infrastructure for Haiti is ultimately about fulfilling obligations and respecting human rights, areas where the UN can, and should, be demonstrating leadership.

Lawyer, Policy Analyst, Author of Because We Are: A Novel of Haiti