Beneath the 193 fluttering flags representing the United Nations’ member states cruises a glossy Mercedes with tinted windows and diplomatic license plates. Security personnel whisper into their sleeves as a Bentley slips through the United Nations’ gates. Staffers bustle between buildings, making final preparations for visiting prime ministers, presidents and diplomats.

Although the General Assembly does not kick off until September 18, high-end retailers, restaurants and hotels are also gearing up for what many call the most profitable time of year. Presidential suites at New York’s top-tier hotels are booked solid for the army of government officials, diplomats and their entourages that descend on New York for each year’s opening session of the General Assembly.

Though many of the visiting dignitaries hail from impoverished nations, where more than half the citizens get by on less than $2 a day, observers would be hard-pressed to find any nod to that deprivation along the East River in late September. Rather, for sharp-eyed New Yorkers, a window opens on the vast disconnect in many countries between the poverty at home and the luxury life of the government elite.

Fleets of Bentleys and Mercedes Benzes line the streets outside the city’s most expensive restaurants, and some hotel managers describe foreign officials arriving with briefcases of cash. Diplomatic spouses pop in and out of luxury retailers along Madison and Fifth avenues, while government officials drop in on Domenico Vacca and other high-end bespoke tailors.

Alastair Smith, a professor of international politics at New York University, believes the glitter and shopping are distracting. He suggests the United Nations move out of New York City entirely. Smith argues that relocating the U.N. would encourage diplomats to focus on the policy issues at hand instead of the many luxuries New York City provides.

“[M]uch of the allure of attending is so autocratic government representatives can wine, dine and shop in New York,” Smith writes in an email. “There is no policy reason leaders need to meet in a crowded city.”

While this lavish spending has become something of an East Side annual tradition, the world beyond New York is changing. Shattered economies and austerity plans across the globe have drawn crowds to the streets in many capitals.

In an age of social media and instant sharing of evidence, the conspicuous spending of government officials has also prompted instant rebuke, sometimes pushing nations toward the tipping point of public outrage, as happened in Tunisia. There, it was the self-immolation of a humiliated fruit peddler, Mohamed Bouazizi, that brought people to the streets. But it was the stream of reports about the lavish spending and larceny of the ruling family that kept them there.

Christopher Jevas, a revenue manager at the St. Giles Hotel, says that profits soar during the General Assembly. “With our location so close to the U.N., nothing compares in terms of business,” he said. Starting in mid-September, no discounts are offered and even the smallest rooms are no less than $500 a night.

Taking advantage of New York’s premier shopping is a popular pastime for visiting diplomats and their spouses, says Mustafa Yildirim, a Protocol Officer for the Turkish Mission. “The wives especially love to shop. When their husbands are busy at the U.N. you can find their spouses working their way down Fifth Avenue.”

A representative from Saks’ personal shopping department was hush-hush about the spending habits of delegates and their families. He did however refer to diplomats and their spouses as some of Saks’ “best clients.”

Frequenting expensive restaurants is another fashionable activity among the diplomatic set. Last year’s top spots to see and be seen included Nello’s, Harry’s Bar and Cipriani.

Diplomatic meals are tax-free, and sometimes heavily discounted, says a waiter at Cipriani. Speaking on the condition of anonymity, the waiter says that diplomats are his least favorite people to serve. “They don’t have to pay tax and then my manager makes me give them a big discount. Then there’s hardly anything left for me and they never tip anyway.” He worries that he will be fired if he says too much, but hopes the system will change soon. “These guys can get very mad if I don’t give them enough of a discount. This is a very hard time of year for waiters and the money is very bad.”

This waiter’s experience is perhaps surprising considering governments often pay for diplomat’s meals. According to Yildirim of the Turkish Mission, the president of Turkey frequents Cipriani, often with parties of 20 or more. This toney establishment’s appetizers can run to $49 for raw scampi or $30 for raw tuna, with entrees like langoustine “scampi” hitting $64, but Yildirim says the government funds allocated for visiting officials are “quite generous.”

Although he refuses to give an exact figure, Yildirim says his mission’s budget for the General Assembly session runs into millions of dollars, a generous allocation considering the average per capita income for Turkish citizens is $14,700. These hefty government funds pay for diplomats’ use of private jets, luxury car rentals, five star hotels and expensive meals.

According to Yildirim, the Turkish prime minister will be staying at the Plaza Hotel during this year’s General Assembly. Yildirim declines to say how much the prime minister’s hotel room will cost, but the Plaza sales department confirms the presidential suite costs $30,000 per night and is booked for the week of the General Assembly. Considering the Turkish Mission expects over 100 diplomats for the 2012 General Assembly, their budget -- which Yildirim described as “more than millions” -- will certainly be put to use.

Some of Turkey’s lower-ranking diplomats will be staying at the St. Giles Hotel. And according to Adeline Colon, the director of group and entertainments sales, diplomats only stay in suites, which run about $4,000 per night. In addition, security teams for the diplomats occupy adjacent rooms and the quarters above and below the St. Giles’ 48 suites. Based on previous year’s profits, Colon estimates the St. Giles will rake in $500,000 from the nine missions occupying the hotel over a two-week period. “The General Assembly is the pinnacle of business for East Side hotels,” she adds.

The spending is all the more striking because some countries already pay for U.N. missions and residences outfitted to host visiting diplomats and other government officials.

Although larger countries like Turkey have lavish budgets set aside for delegates' expenses, and pay with mission checks, smaller countries often pay in cash. “Every year, a mission shows up at the front desk with a suitcase full of $100,000 or $200,000 in cash,” says Colon. “Although some countries are very small and I’m not too sure where they would get the money to cover all of their expenses.”

Bruce Bueno de Mesquita, a professor of politics at New York University and an expert in foreign policy, traces the use of cash by visiting officials to cronyism and corruption at home.

In countries “whose leaders depend on a small number of cronies (Generals, senior civil servants, family/clan members) to keep them in power, the ‘efficient’ way to govern is to shift money from the people (through tax revenues, fees, loans, aid, etc.) to the cronies,” Bueno de Mesquita writes in an email (italics added). To keep this misallocation of funds off the books, delegates from some small coalition governments pay in the least traceable way -- cash.

Jevas, too, has also seen delegates wielding suitcases full of cash at the St. Giles, and on occasion has witnessed some questionable behavior.

“You know those secret service guys?” he says, referring to Obama’s secret service agents caught imbibing and having sex with prostitutes in Colombia, “Let’s just say that behavior happens in New York, too.”

Have you seen dignitaries living the high life around town ahead of the U.N. General Assembly? Send any tips or pictures to tips@100R.org. 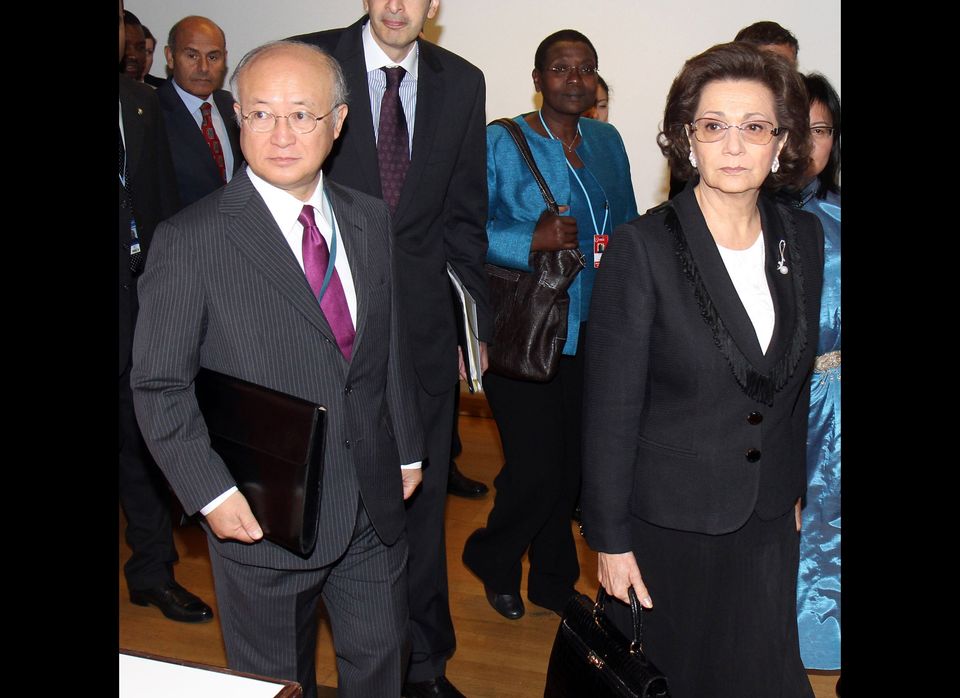 1 / 7
Suzanne Mubarak, Egypt
Ousted Egyptian President Hosni Mubarak's wife Suzanne has been noted for her fashion sense and was cited as a Clinton family friend. After Mubarak fell from power, she largely <a href="http://www.thedailybeast.com/newsweek/2012/01/01/suzanne-mubarak-egypt-s-mean-queen.html" target="_hplink">has disappeared</a> from public life. (Photo: AP)
AP