The 68th Session of the UN General Assembly will take place this week in New York. Global leaders will be gathering with good intention to set a new course for a sustainable future. One of the most anticipated events of the week is Secretary-General Ban Ki-moon's presentation of his recommendations for the post-2015 development agenda. Gender equality is confirmed as a major focus. Looking at the slow progress of the Millennium Development Goals, however, some have their doubts about whether gender equality can really succeed.

Pretty much across the board, in every country and in every industry, women continue to be undervalued, underrepresented and underpaid. Today, two-thirds of those who live in abject poverty are women and girls. Two reasons that likely contribute to this predicament are that two-thirds of the global illiterate population is women due to lack of access to education, and only between 10 and 20 percent of women in developing countries have land rights. Add to this that women make up less than 19 percent of parliamentarians and 10 percent of heads of state. In other words, women's voices are absent in addressing the issues that most affect their lives and the lives of their families.

While those who work in global development seem to clearly acknowledge the benefit of empowering women and girls, it seems to be more in theory than in practice.

One blatant example is the lack of financial support for UN Women by UN member states. "Since the creation of UN Women, words have not matched funding action," said Phumzile Mlambo-Ngcuka in her first press conference last week as Executive Director of UN Women. She called the limited funding, "the elephant in the room."

So what's really going on here?

While I agree that the limited financial support for UN Women is the elephant in the room, I think there is an even bigger elephant blocking that one: Religion.

As a global culture, so many of us have internalized the maleness of God, or Allah, or Buddha, that we have undervalued or dismissed our feminine nature. This, I believe, is what holds us back from putting gender equality into practice, and to truly eradicating global poverty and building a sustainable future for all.

What is not talked about nearly enough is that women once held power and leadership in religion. Before the patriarchal religions, there was the Goddess religion, where reverence of the Goddess correlated with women's social roles as leaders in every aspect of society, including law, business and government. This silenced history of female power and leadership in religion and culture could hold the key to bringing back our reverence for the feminine.

An example of an NGO's effort to use the powerful symbol of the Goddess to make change can be found right now in India.

Save the Children India is touching upon the culture's spiritual devotion to the Goddess with a campaign against domestic violence and female trafficking called "Abused Goddesses." In this print campaign that has now caught fire online, Lakshmi, Durga and Saraswati, three revered goddesses in the Hindu religion, bear the scars of physical violence - a graze, black eye, a fat lip and cuts - to help the citizens make the connection between their reverence for women in religion and mythology and violence against women. 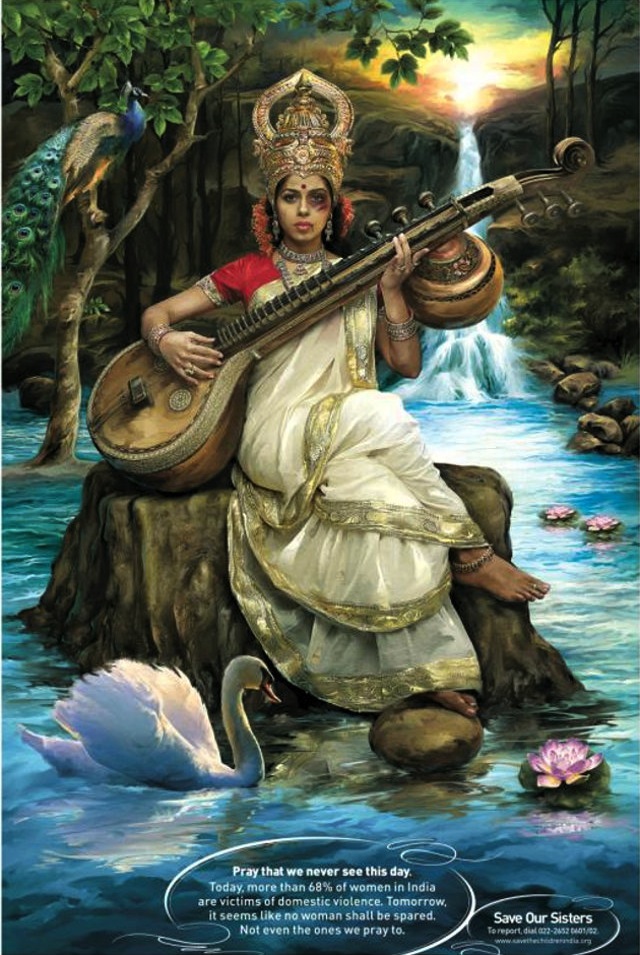 It's a powerful campaign that may very well help Indian citizens make the connection between the goddesses they respect and devote to and the women who are their mothers, wives and daughters.

Right now UN Women is calling for a stand-alone goal of gender equality in the post-2015 agenda, as well as robust mainstreaming of gender considerations across all parts of the framework. While I am in full agreement with this, I think that if we ignore the underlying spiritual cultural attitudes and assumptions internalized by so many of us, we will keep running into roadblocks where we support gender equality in theory, but not in practice.

Last week in an interview, Executive Director of UN Women Phumzile Mlambo-Ngcuka said: "We need to win the priests, the rabbis, the traditional chiefs" to tackle religious and cultural barriers. I am wondering instead if perhaps there should be a feminine spiritual council?

While we need to provide women and girls access to education, quality healthcare and economic opportunities, at the same time, we need to provide them with a culture that values the qualities of the feminine - connection, co-creation, intuitive knowledge, life-giving, life-enhancing and life sustaining - in both women and men.

The task of releasing an old paradigm - the mindset of male leadership as "the norm' -- is not easy. But I am wondering if, for a few moments, we can take off our current lens and see how the oppression of the feminine has caused us deep wounding as a shared humanity?

Without women's leadership in law, politics, government, and business, and equality in land rights, access to education and economic opportunities, we will remain adrift - suffering as a global society in poverty and violence. The truth is that without the feminine, we are only half alive. If we don't nurture the fullness of life within us - the feminine and the masculine - this will stunt our growth not only as individual human beings, but also collectively as a global civilization.

Tabby Biddle, M.S. Ed., is the Director of the Los Angeles Goddess Collective, a community of women leaders and emerging leaders at the intersection of feminine spirituality, creative expression and socio-political change.