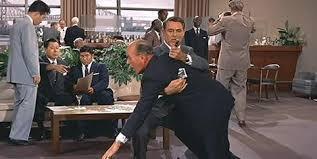 In Alfred Hitchcock's riveting North by Northwest, Cary Grant is holding-up the diplomatic victim, and with the knife in his hand, the protagonist is about to get framed for a crime he did not commit in one of the more traversed areas of the United Nations. That is fiction but the "Delegates' Lounge," with a northeast view of the East River and N.Y.C., is even more.

The Delegates' Lounge is the informal gathering ground for the UN's diplomats, journalists, staff and NGO's. It had a bank of telephones that were frequently the only link in the era before the mobile phone. It had its own concierge that would take/deliver messages and "page" diplomats if someone was trying to reach them at the UN -- with paging generally performed in multiple languages. 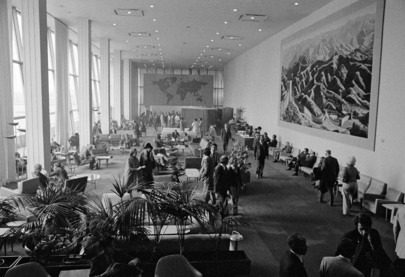 In filming North by Northwest the director had to build a replica set off-site. The Delegates' Lounge was probably viewed as beyond the triviality of film. The famous scene was shot in a film studio, but true to detail.

Rendezvous for Exchanges of Information: Love and Weapons?

On more than a few occasions, I was asked to "grab a cup of coffee" with another ambassador, NGO or journalist, probably the media being the most frequent request. There was though the infatuated young woman who employed some diplomatic pretext to express her personal admiration. The more unusual intrigue though was the Russian regional official who sought the introduction of a journalist to offer sale of weapons, for a handsome price. For the not so adventurous spy, it was a much easier way to gather information than James Bond might consider. It is a place where you're more likely to get duped or framed, then being victim in a Hitchcock style scene. There is a scent of intrigue along with the aura of roasted coffee. The color scheme reflected the mood, more stirred than shaken.

Some made the Delegates' Lounge their home away from home. As morning became afternoon, they drifted from the coffee to the alcohol bar below. If a second wind was needed, then they would grab a short, or not so, nap in one of the many comfortable lounge chairs. The bar generally got a bit more boisterous and crowded until closing in the early evening. This is not just the UN, but for good or bad, diplomacy is stirred by the socializing and shared drink. (Read:"Seduction Diplomacy")

The Delegates' Lounge though served a more useful function than the trivial that this article might initially indicate. It is a common, neutral ground where ambassadors might bump into each other, even if their capitals did not have formal diplomatic relations. The media might garner greater transparency through the more direct interaction. Liberation movements and governments in exile may have no more substantive diplomatic representation than their emissary here with credentials to enter. NGO's more directly representing global citizens could gain access to UN diplomats and staff. During the more hectic UN gatherings bringing together presidents, kings and ministers, the Delegates" Lounge became everything from Oval Office to Royal Hall, without the ornamentation.

Over the last few decades, the UN has opened itself up more to film, music, art and popular culture. The UN General Assembly hall has hosted concerts, fashion shoots, traditional dancers and film screenings. The home of the "Global Citizen" has truly sought to become more welcoming, on the Web and in its physical domain. (Read more at "Cultural Diplomacy".) The Delegates' Lounge has also gone through an extensive physical renovation, the bank of desk phones has been replaced by computer screens. Nonetheless, the Delegates' Lounge remains the place for considered diplomatic exchange or the trivial, the place where the world meets, the revolution continues and the renegade can find resonance. It is also the place where the Ex-Ambassador can sometimes still seek to change the methodology as well as substance of a world again increasingly at edge.

Reality can be stranger than fiction, but then music and film can be inspiration for the change and the liberation of our minds from the conventional and conformism. Can't help but love this alt-nation song: "Renegades" by the band that has adopted the name of "X Ambassadors," -- it takes a journey beyond the expected of what we have within us and the contributions, courage and humanity we see on our fellow man/woman -- please watch, touch, taste and hear it.