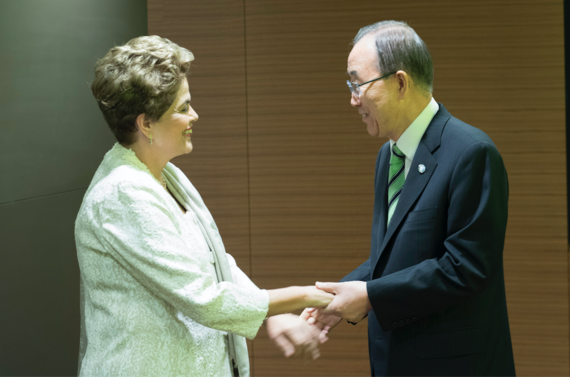 The United Nations threw a large and lavish party at its headquarters in New York on Earth Day, the opening day of the signing ceremony for the world's new climate agreement. About 170 heads of state and government representatives came to inscribe their names, in alphabetical order by country, in the General Assembly Hall. They also read short statements reinforcing the power of the climate accord for all nations, with John Kerry, United States secretary of state, quoting Nelson Mandela, saying, "It always seems impossible until it is done."

In between, officials ate lunch in the Delegates Dining Room as guests of Secretary-General Ban Ki-moon, with approximately 200 people there to talk about how "investment flows are being gradually redirected toward a low carbon and resilient economy," the UN statement read, with the lunch and signing webcast live.

"We are breaking records in this Chamber -- and that is good news," said Ban as the first speaker at the ceremony. "But records are also being broken outside. Record global temperatures. Record ice loss. Record carbon levels in the atmosphere. We are in a race against time. I urge all countries to move quickly to join the Agreement at the national level so that the Paris Agreement can enter into force as early as possible."

The countries signing the agreement -- starting with François Hollande, president of France, whose nation officially ushered the accord into place in December -- had not been pinned down until the last minute, given the moveable schedules of some of the globe's most important people.

"France needs to be a role model, it needs to set an example," Hollande told the press at the UN later. "France wasn't just the venue for the agreement. It contributed to the solution." France, he added, "wants to be the first not just to ratify but to implement the agreement." He acknowledged ratification takes a long time in France, but said that it was likely to happen by the summer.

As of April 20, the arrival of Dilma Rousseff, president of Brazil, who is under impeachment, was up in the air, as was Vladimir Putin, the Russian president (his deputy, Alexander Khloponin, attended). Heads of state who did appear included Matteo Renzi of Italy, Justin Trudeau of Canada, Joseph Kabila of the Democratic Republic of the Congo, Ollanta Humala of Peru and Evo Morales of Bolivia.

Rousseff did arrive and speak, noting, after she talked about climate change, the "grave moment" her country was undergoing and that "Brazil is a great nation, with a society that was able to defeat authoritarianism and build a vibrant democracy. Our people are hardworking and have great esteem for freedom. I have no doubt they will be able to prevent any setback."

The goal behind the high-security signing ceremony was to signal that all the leaders who came to sign were serious about mitigating and preventing further climate change effects, UN officials told the media days earlier in a briefing. The agreement will be open to signature until April 21, 2017.

The officials who signed the agreement featured representatives of the top four national emitters of greenhouse gases, in order: Zhang Gaoli, vice premier of China; Kerry of the US; India's environment minister, Prakash Javadekar; and Russia's deputy president. The European Union, a 28-member-country group, falls between China and the US as an emitter and is also a signatory to the agreement, but each country must ratify the agreement itself, taking enormous work, Hollande said.

Christiana Figueres, executive secretary of the UN Framework for Climate Change Convention, and Ségolène Royal, France's ecology, sustainable development and energy minister and the president of the Paris conference, or COP21, which adopted the agreement in December, were present at the signing as well. (Royal is a former "partner" of Hollande.)

Only about 15 countries deposited instruments of ratification at the UN, the next step to putting the agreement into force. These "early ratifiers," made up of small island developing states (as well as Somalia), are the most vulnerable to global warming.

The agreement marks one of Ban's most important achievements -- if not the most important -- during his two-term tenure as UN secretary-general, which ends this year. He has struggled recently to overcome damaging reputation problems related to peacekeeping sex abuse scandals. UN officials repeatedly emphasize that managing the effects of climate change will have a direct impact on achieving the new universal development aspirations of Agenda 2030, or the Sustainable Development Goals, which went into effect in January for 15 years.

But the SDGs probably didn't matter to people trying to move around Midtown East, where traffic on the stretch of First Avenue abutting the UN was strictly curtailed by the New York City Police Department and other security forces on the day before and day of the signing. A US Coast Guard boat had been sitting in the East River, right outside the UN, since early in the week.

On the day before and day of the signing, full access inside the UN was also blocked to accredited journalists, as if government officials -- whose salaries in the democratic world are paid for by the public -- might be asked questions about climate change or, worse, who is to blame for the faltering Syrian peace talks. One area given over to media by the president of the General Assembly office was even restricting certain journalists with UN accredited passes.

And though the UN constantly talks about how many of its important projects and trust funds are miserably underfinanced, the signing ceremony seems to have found the money to take place on a grand scale.

Not everyone in the UN was transfixed by the excitement of the VIPs in their midst; the Dag Hammarskjold Library, situated at the southernmost end of the campus, remained a small island of serenity during the hubbub, which was how the librarians, they nodded unilaterally, liked it.

At the ceremony lunch, guests were seated at tables of 10, each with a mix of participants from business, civil society, government and the UN. Details on how much the lunch cost or even what was served were hard to find despite numerous contacts with several offices at the UN, including Protocol, who said on the phone they couldn't "reveal" that information and hung up. (It turns out it the meal was fish and salad.) Among the guests were Juan Manuel Santos, president of Colombia, and Mary Robinson, representing her foundation, which is focused on "climate justice."

As to the technical aspects of the agreement, a minimum of 55 countries, accounting for at least an estimated 55 percent of the world's total greenhouse gas emissions, must ratify the accord for it to enter into force 30 days after those conditions are met. UN officials have decided on 2020 for the agreement's start date, though they hope it will occur sooner.

Alternatively, states can "accept" the agreement instead of ratifying it, as the United States plans to do. The White House has deemed that the agreement does not require changes to US laws, so President Barack Obama has the ability to authorize adherence under his executive powers. This approach gives him the ability to skirt Senate ratification for the international agreement, since he expected strong pushback from Republicans, leaving the US isolated as to global consensus on the agreement's goals.

The Paris agreement, moreover, is not a treaty but an international legal document, according to the UN, and it has no enforceable capacity. It evolved after years of arduous negotiations, played out in annual conferences in many capitals, to present a global unified front to combat the warming of the earth and to prevent more environmental damage to the planet.

Sealed at the conference in Paris on Dec. 12, 2015, parties to the agreement committed to limiting global warming to well below 2 degrees Celsius (or 3.6 degrees Fahrenheit) above pre-industrial levels. Yet many experts say these limits are not nearly enough to make headway against a hotter planet and related chaotic consequences, such as famines, floods, droughts, rising sea levels, pandemics, migration and conflict.

The main method for ensuring adherence to the agreement is the adoption of national action plans, nonbinding commitments to reduce greenhouse gas emissions by each country. About 190 countries have submitted such plans. The agreement also entails the mobilization of much-needed financing for technological and other support to developing countries to help them cope with climate change.

To begin carrying out the plans, developing countries will need enormous resources, including the $100 billion, if not triple that number, pledged by developed countries and private sources, to follow a low-carbon direction.

The amount so far in this pool is estimated by the Organization for Economic and Cooperation Development to be $60 billion, said Heather Coleman, manager of climate change at Oxfam America. But the methodology of how that money has been counted is contested by developing countries, who are asking, where's the money.

As Justin Trudeau, prime minister of Canada said, to much applause at the General Assembly signing, "Developing countries should not be punished for a situation they didn't create," adding later in his speech that "in every possible sense we are all in this together."