* Welcomes calls for Security Council to refer Syria to ICC

By Stephanie Nebehay and Tom Miles

GENEVA, Sept 17 (Reuters) - U.N. investigators have added more names to a secret list of Syrians suspected of committing war crimes during the 18-month-old uprising against President Bashar al-Assad, and warned on Monday more foreign Islamist militants were fighting there.

The human rights investigators, led by Paulo Pinheiro, said they had gathered "a formidable and extraordinary body of evidence" as Syrian government forces conduct daily air strikes and shelling in indiscriminate attacks on civilian areas.

They welcomed calls for the U.N. Security Council to refer the situation to the International Criminal Court (ICC). But diplomats noted this would require acceptance by Russia and China, which have blocked all previous Western efforts to condemn Syria or start proceedings at the U.N. war crimes court.

"Gross human rights violations have grown in number, in pace and in scale," Pinheiro told the U.N. Human Rights Council in Geneva. "There is no statute of limitations on these crimes."

Referring to U.N. rights chief Navi Pillay, he told a news conference: "We are very glad that the High Commissioner for Human Rights has requested the referral (to the ICC), and she has all the power and all the mandate to do that. We don't have (it)."

He did not say if any Syrian rebels were among the names on the list, which updated a confidential one his independent team submitted to Pillay in February.

Pinheiro presented the team's latest report, issued a month ago, saying Syrian government forces and allied militia had committed war crimes including murder and torture of civilians in what appeared to be a state-directed policy.

More than 20,000 people have been killed in the conflict , 1.2 million are uprooted within Syria and more than 250,000 have fled abroad, the United Nations says.

Pinheiro reported an "increasing and alarming presence of foreign elements, including Jihadist militants," in Syria, some joining the rebels, others operating independently. They tended to radicalise the rebels, who have also committed war crimes, the Brazilian expert said.

"The signal of their presence is basically the explosions, the attacks, that have been registered," Pinheiro later told a news conference.

"We consider that one of the most alarming and scary elements of this protracted war is the presence of those elements," he said, adding some had their own agenda. "They are sort of loose cannons," he said, declining to say more about their origins until more investigation was done.

He cited allegations that rebels had "used prisoners to detonate vehicle-borne explosives", killing their captives in acts that also posed a danger to civilians.

Karen AbuZayd, his American co-commissioner on the team of 20 investigators, said of the Islamic militants: "These elements do seem to contribute to a radicalisation of some of the groups that they've begun to work with inside. The bigger bomb blasts, the pattern, the way they work it, is what we've seen elsewhere with these same kinds of groups."

Pinheiro said it would be improper to make public the list of suspects because they were entitled to the presumption of innocence and no mechanism to hold perpetrators responsible was yet in place where allegations could be contested.

His team interviewed more than 1,100 victims, refugees and defectors in the past year. "We have no interviews with wounded soldiers or families of dead agents of the government because the government of Syria does not allow us access to Syria."

"The mercenaries are a time bomb that will explode later in the country and in countries supporting them after they finish their terrorist missions in Syria," he said.

"Terrorist groups" active in Syria came from 17 countries, including Afghanistan, Libya and Yemen, he said, adding the report should have named countries that "support the killers", which he said included the United States, Qatar, Saudi Arabia, Turkey and Libya.

Russia, Syria's ally which has vetoed all Western attempts at the U.N. Security Council to condemn Syria, said rebels were committing "terrorist acts" including executions, and Jihadists were increasingly active due to "support from the outside".

"There are Jihadist mercenaries fighting on the opposition side. Those who in the view of some states are bringing democracy to the region are in actual fact carrying out mass murder," Russian diplomat Maria Khodynskaya-Golenishcheva said.

Western nations want the session to condemn Assad's government and to extend the commission of inquiry's mandate, which expires this month.

Turkey's ambassador Oguz Demiralp described the conflict in Syria as a "serious threat to international security" and said those behind crimes there would be held accountable. 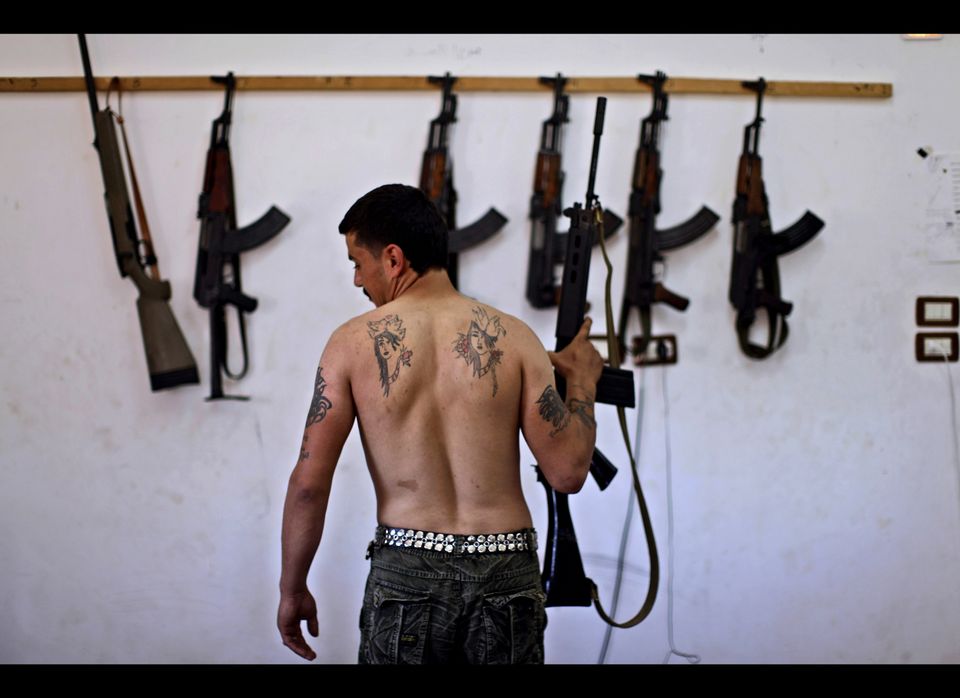 1 / 13
Tawfiq Hassan
Syrian rebel fighter, Tawfiq Hassan, 23, a former butcher, poses for a picture, after returning from fighting against Syrian army forces in Aleppo, at a rebel headquarters in Marea, on the outskirts of Aleppo city, Syria, on Sunday, Aug. 26, 2012. (AP Photo/Muhammed Muheisen)
AP