Usually one searches for all the good proposals that were deleted or changed in the annual UN women's conference that helps set the agenda for the world body. This year the end result was relatively positive.

There were some bad deletions (like the one on sexual orientation). But the conclusions in the 58th Commission on the Status of Women (CSW) were better than expected on sexual and reproductive rights, including safe abortion, emergency contraception, and sex education. The conference opposed early and forced marriage, female gentile mutilation and of course violence in all its forms. (see text)

"We have achieved what we came to do, against great odds, and the determined attempts by the Holy See and a few conservative countries to once again turn back the clock on women's rights," said Shannon Kowalski, advocacy and policy director of the International Women's Health Coalition (IWHC), one of the most informed groups at the event.

Fundamentalists?
Egypt's delegation head, Dr. Mervat Tallaway, a former minister, told the gathering: "We shall not allow fundamentalists and extreme groups to disarm women from their rights."

The Commission, founded in 1946, is the central policy making body of the United Nations on women's rights and equality. It convenes once a year for two weeks to evaluate progress and propose specific measures.

Its conclusions are not binding but find their way into a variety of international documents and government policies. They are also fodder for grass roots organizations, which attended by the thousands, that lobby their respective governments afterwards.

This year the document analyzed the shortcomings in the design and implementation of the Millennium Development Goals, a top priority for the developing world. They include eight topics, such as cutting extreme poverty by half and ensuring universal primary education by 2015. A UN working group is currently devising new post-2015 goals.

Fix the UN's Millennium Development Goals
New was a call for the next set of targets for the Millennium Development Goals to include a separate section on women's rights, equality and empowerment. It called for "gender equality, the empowerment of women and human rights of women and girls to be reflected as a stand-alone goal" as well as a part of each of the other goals, whether water or sanitation.

Some Western delegates asked whether the group wanted to pre-empt the General Assembly's discussion next year.

"Yes, we do," said Françoise Girard, the president of the IWHC, in an interview with this reporter. The conference's "Agreed Conclusions" also called for gender targets in every new MDG, regardless of the topic, whether it involved education or latrines in schools.

Vatican loses Latin America
The Vatican's positions echoed those of previous years on reproductive rights, contraceptives and of course, gays. But now Catholic Latin America refused to follow. Neither did the Philippines. (Qatar, Malta and Pakistan often sided with the Holy See.)

"They had been speaking a lot in the room and not have other governments front for them," Girard said. "The new Pope has not made any difference."

Another argument were references to the nuclear family which The Holy See and Qatar spread through the text, shocking many delegates who see diverse forms of the family, particularly in Africa where the extended family is prevalent.

"It stigmatizes other forms of the family," Girard said. "It is much more complex. There can be violence or abuse, or children married by their parents. All kinds of parents need to be supported."

Rogue African delegations
Several nations, including Nigeria, Djibouti, Cameroon and Comoros, spoke on a range of issues that had already been approved by their presidents in the African Union, including early and enforced marriage and support of the traditional nuclear family.

African women had experienced this anarchy last year also. "We are greatly concerned that some member states make attempts to back on commitments already made on the rights of women and girls."

The women said that harmful traditional, customary and contemporary practices such as child, early and forced marriages; female genital mutilation; intimate partner and domestic violence; rape; trafficking; and violence had to be combated.

For the United States, gone were the days of the Bush administration when the entire conference was delayed by arguments over references or perceived references to abortion.

But Americans and Europeans failed to insert a provision prohibiting discrimination and violence based on sexual orientation. An estimated 76 nations have some kind of anti-gay legislation. 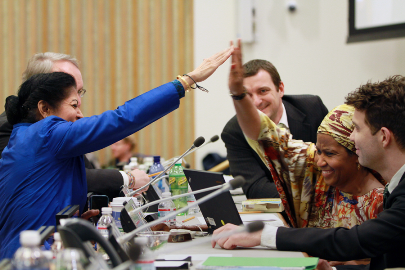