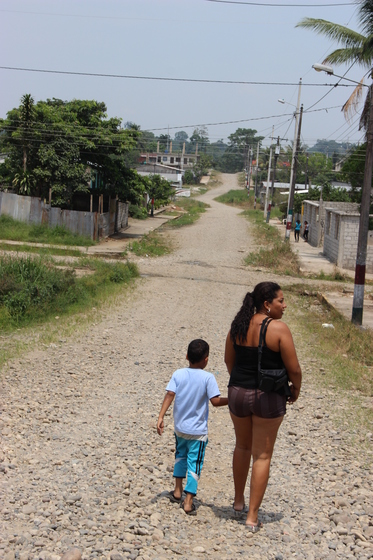 A woman and her child near the northern Ecuadorian border.
Photo by Gabriela Malo/WFP

In 2001, Diego and his family were displaced from their home by irregular armed groups in Colombia. In a recent interview, Diego recalled that one of the irregular armed groups "tried to kill [him] in [his] home. They wanted [him] to work for them but [he] wouldn't ..." After being labeled an enemy by this particular group, Diego decided he had to uproot his family in order to escape to safety, because he didn't want the group to target his family. He moved with his family to another part of Colombia, but the situation remained dangerous, forcing them to eventually cross the Ecuadorian border.

Since arriving in Ecuador, Diego and his family have struggled. "When we first arrived here ... we made empanadas and papas rellenas (stuffed potatoes) to sell, but it didn't go so well. We made US$20 dollars selling our food from 10 a.m. to 6 p.m. and it was very hard. While in Colombia, when we sold empanadas and tamales, we would make about $60 in a single afternoon." In addition to their low income, even though he and his family now live in Ecuador, Diego still has not escaped intimidation and danger.

Diego has encountered members of one of the irregular armed group from Colombia even after fleeing to the northern border region of Ecuador. One of the members tried to follow Diego to his home, but luckily he was able to turn a quick corner and escape. When his 10-year-old daughter found out about the incident, she began to hug him tighter each time he left the house, pleading him not to leave her sight. Diego recounts his daughter asking, "Are they going to kill my dad?" He and his family continue to live in the border region of Ecuador, hoping every day that the men who forced them out of Colombia do not find them.

Diego sometimes misses Colombia. But he understands that he had to leave, declaring, "when [his] children grow up, [he'll] explain to them that [he] wouldn't want them to take such a path" and be forced into the irregular armed groups.

Diego's story is not uncommon. Annually thousands of Colombians flow into Ecuador, displaced by violent groups in Colombia, where armed feuds have forced Colombians from their homes for fear of forced recruitment, extortion and being caught in the crossfire of continual violence. Because of this, Ecuador has the largest recognized refugee population in Latin America.

Within Ecuador, refugees suffer from discrimination and high levels of unemployment. The Ecuadorian public often associates Colombian refugees with domestic crime, which makes it harder for recently arrived immigrants to find jobs. Many asylum-seekers like Diego leave behind lucrative businesses and jobs in Colombia and find themselves in poverty in Ecuador. Throughout the northern border region, many Colombian women are cornered into such desperate conditions that they are forced to take up prostitution. A recent report by WFP found, "The majority of Colombians engaged in sex work start this type of work after arriving in Ecuador for economic reasons. By force or choice, women and girls engaged in sex work are vulnerable to a host of other protection threats (e.g. gender-based violence, exploitation and abuse by brothel owners and clients, discrimination and sexually transmitted diseases)." However, asylum-seekers often resolve that it is better to live in poverty and exploitation than to face the violence of their native country.

It is often difficult for those fleeing Colombia to attain official refugee status. Colombians must apply within 15 days of entering Ecuador to have their case considered by the government, but many are not aware of this time restriction. Ecuadorian authorities have reported approximately 176,000 applications for refugee status from Colombians from 1999 to June 2014. Authorities from the Ecuadorian Ministry of Foreign Affairs reported last June that the government has officially granted refugee status to 60,500 asylum-seekers in the same time period. The Ecuadorian Ministry of Foreign Affairs also reported that approximately 950 Colombians continue to enter Ecuador each month. But because many asylum-seekers are unaware of the requirements to apply for refugee status, some experts suggest that a large population of invisible, undocumented Colombian asylum-seekers resides in Ecuador. 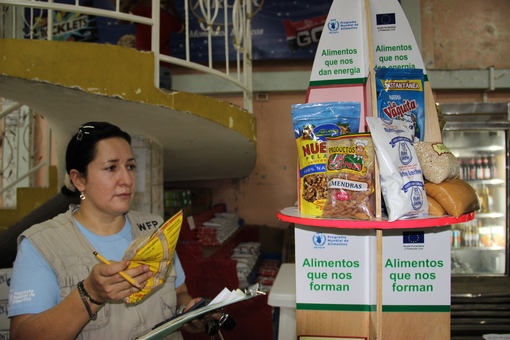 Yaqueline Loayza is a program monitor for WFP in Lago Agrio, located in the border province of Sucumbios in northern Ecuador. She outlines how WFP helps displaced Colombians establish livelihoods in Ecuador by providing them with food and nutritional training, and helping them to get in contact with other organizations that offer support. Loayza says that even though Sucumbios is accustomed to receiving Colombian refugees, the stigma remains. According to Loayza, the cost of housing is often too much for families to bear and they often find themselves having to forego different basic necessities.

WFP supports refugees and asylum seekers with electronic food vouchers, which allow them to purchase nutritious food. In order to continue to receive food assistance, program beneficiaries must attend nutritional trainings to learn how to diversify family diets to prevent malnutrition. Diego highlights, "There is a huge difference between having the food vouchers and not having them. For us it has been a great help because we arrived here in Ecuador empty-handed. We didn't know where we were going nor what we were going to do."

As someone working directly with the refugee situation, Loayza insists that there are indeed things that Ecuadorian citizens and the greater international community can do. Loayza asserts, "We need to work more on the awareness of the host population. There are people who see Colombian families as their rivals who come to take their jobs. We need to continue to create projects that promote integration of refugees." WFP recognizes existing tension between Colombian refugees and native Ecuadorians. Therefore, in all of its programs in border regions, it does its utmost to promote harmony between these two groups. For example, in food assistance programs for vulnerable Colombians, WFP also delegates food and electronic food vouchers to vulnerable Ecuadorians, so that Ecuadorians do not feel as if "foreigners" are the only ones whom WFP supports. WFP also encourages school integration between Ecuadorian and Colombian families, creating community spaces in which children receive locally produced and nutritious school meals.

When asylum seekers arrive in Ecuador, they often have limited access to basic human necessities. They may not have enough money to pay for housing, food, clothing and items associated with their children's basic education. WFP's food assistance programs work to make it so that nutritious food is one less expense for struggling families like Diego's. Diego says, "A little bit and a lot is the same thing when you have nothing at all." 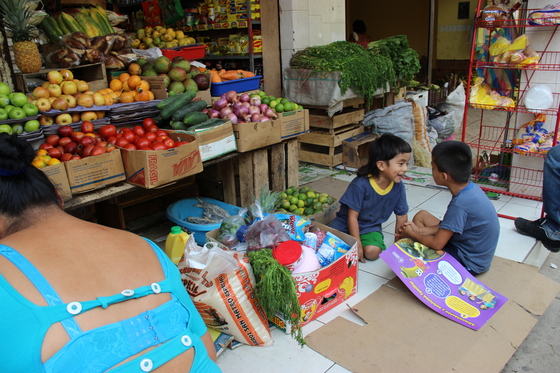 "Diego" is an alias used to protect the person interviewed by WFP.

Interviews have been translated from Spanish to English.

Visit the website of the World Food Programme at www.wfp.org