Buying a new house last December was an easy decision for Brad and Melanie Juarros.

They had been eyeing foreclosed properties for months in their Sacramento, Calif. neighborhood just north of the American River. The house the couple wanted to buy was bigger, the $140,000 price within budget and the interest rate low (five percent for a fixed-rate mortgage). Even though they hadn't yet sold their present home, the Juarroses bought their dream house.

But there was a problem. Like millions of Americans, the couple owes more on their present home than it's worth. More than 15 million homes are mortgaged for more than their value, according to an August report by real estate research firm First American CoreLogic. About one in three homes with a mortgage fall into this category. The Juarroses owe about $83,000 on their home and they say they are worried that they won't be able to sell it for that much.

Rather than selling at a loss, they decided to rent out their old home to tenants. In doing so, the Juarroses join a growing number of homeowners who have become landlords, often reluctantly, as they struggle to sell during one of the worst housing markets in recent memory. The most prominent example may be U.S. Treasury Secretary Timothy Geithner, who after failing to sell his $1.6 million home in a New York City suburb found tenants instead.

Since 2007 about 2.5 million homes have been converted into rentals, according to an analysis performed for The Huffington Post by Foresight Analytics, a real estate market research firm based in Oakland, Calif. The conversions account for about 85 percent of the increase in rental homes. During the housing boom, the trend was just the opposite: in 2003 and 2004 about 500,000 rentals were converted into owner-occupied and for-sale homes, the analysis shows. 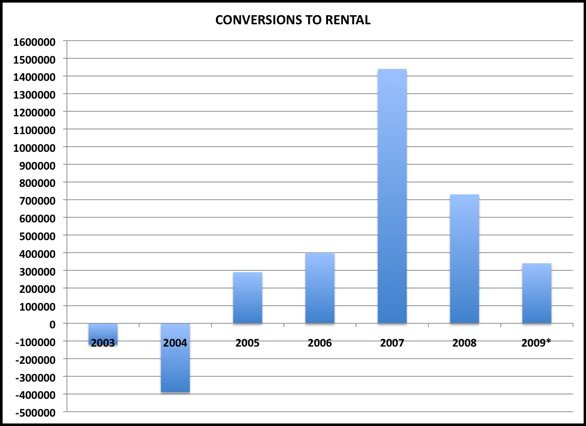 *2009 is year-to-date as of June 30, not annualized
Source: Foresight Analytics

"With prices going up there was a big incentive to sell," said Matthew Anderson, a partner at the firm. "But when prices decline that's when you see a big shift in the other direction."

There are three main causes behind the shift, said Cynthia Kroll, senior regional economist at the Fisher Center for Real Estate and Urban Economics at the Haas School of Business at the University of California, Berkeley.

"We're going back to the homeownership levels from the pre-subprime boom era," Kroll said.

Indeed, since the rate of home ownership hit a record high in 2004 it has decreased by about two percent, according to Census Bureau data. It's the lowest homeownership rate since 2000.

"We were getting more people who couldn't afford to be homeowners" during the housing boom, Kroll said. "And that's readjusting now."

Anderson also points to the glut of homes on the market, particularly among condos.

"There was such excess in home building going on during the boom," he said. The conversion of millions of homes to rentals "represents a response to the overbuilding that occurred."

Anderson estimates there was a surplus of five million housing units produced between 2001 and 2008 compared to demand. That is, too many homes were built for too few people.

Assuming most of those were originally for sale, the recent conversion to for-rent helps counteract that excess, Anderson said.

With more people renting, landlords' incomes have skyrocketed. For those landlords outside the real estate industry, such as those renting out an extra room in their house or a second home, incomes have increased 75 percent since 2005, federal data shows. That year -- the height of the housing boom -- was the worst for landlords in terms of income since 1992, according to statistics maintained by the Commerce Department's Bureau of Economic Analysis.

That doesn't help homeowners like Aaron Lorenz, a professor at Ramapo College of New Jersey. Lorenz and his wife bought their Massachusetts home in 2004. Three years later they moved to New Jersey. They've been trying to sell their house ever since.

"We'd like to sell the house and buy a new home," Lorenz wrote in an e-mail. "But we can't buy until we sell and we can't sell the home for less than we paid for it."

The couple is currently renting out their Massachusetts home but the rent doesn't cover the mortgage. They're losing about $300 a month.

"Our biggest fear is paying the mortgage for 10 years and then having to sell the house for a loss," he said.

Home prices nationally are down 31 percent from their 2006 highs, according to the S&P/Case-Shiller Home Price Index.

Lorenz is one of dozens of HuffPost readers who contacted us to share their housing woes. Most wrote they're unable to sell their homes, so they have to rent to tenants to cover the monthly mortgage. All are doing so reluctantly. None are turning a profit.

With homeowners pricing their homes to rent as soon as possible, apartment buildings could be bearing the brunt of the cost, said Daniel McCue, a research analyst at Harvard University's Joint Center for Housing Studies.

Adding homes to the rental market increases the supply of available rentals but there isn't a correlating increase in the number of renters, McCue said.

For large apartment buildings, the increase in supply is "shrinking their customer base, which could hurt them in the long term," he said.

Large apartment building owners typically set rents, as opposed to being at the mercy of what tenants are willing to pay, McCue said. "But they don't necessarily have the freedom to lower rents [in order to fill a vacancy] because then everyone in the building would want a lower rent, so they have to balance that out with the possibility of having a vacant property."

There are about 4.4 million empty homes for rent, census figures show. The vacancy rate is among the highest ever recorded, according to census data that goes back to 1956.

"There are falling rents, more vacancies, and apartment building owners are having to compete with [homeowners] looking for extra income," McCue said. "It's getting to be a difficult story for these property owners in places with lots of foreclosures."

From 2005 to June 30 of this year, 3.2 million homes have been converted into rentals, according to Anderson's analysis. At the end of 2004, there were about 36.9 million homes either occupied by tenants or empty and available for rent, census figures show. As of June 30, that number increased nearly 11 percent to 40.9 million units. Of that four-million home increase, about 800,000 came from newly built apartments. The rest are conversions.

"It's a significant shift. It reflects how quickly we're going back from the increase in homeownership," Kroll said.

The situation could largely be temporary, though.

"Most of these conversions are opportunistic," Anderson said. Condos turning into apartments are temporary, stopgap measures to produce income for the owner while the condo goes unsold.

"When conditions in the for-sale market improve, I expect most of these to revert back," he said.

It's what Brad and Melanie Juarros are hoping for. He was laid off Wednesday from his job as a project manager in Sacramento County's Planning Department.

"Before, a second house was an asset," Brad Juarros said. "Now, it's a stone around your neck." 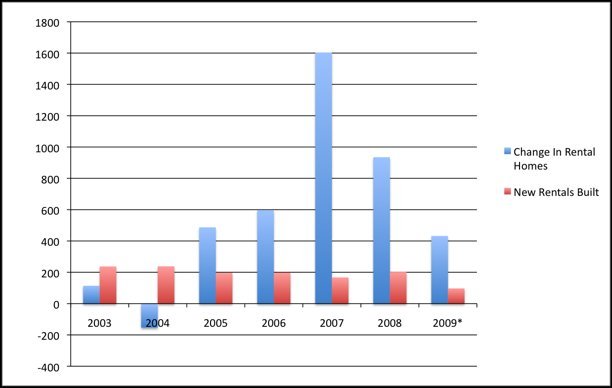 *2009 is year-to-date as of June 30, not annualized
Source: Foresight Analytics

UPDATE: Calculated Risk looked at this very phenomenon back in July:

This means that another 3.2 million or so rental units came mostly from conversions from ownership to rentals.

These could be investors buying REOs for cash flow, condo "reconversions", builders changing the intent of new construction (started as condos but became rentals), flippers becoming landlords, or homeowners renting their previous homes instead of selling.

This huge surge in rental supply has pushed down rents, and pushed the rental vacancy rate to record levels.

Yes, people are doubling up with friends and family during the recession, and some renters are now buying again, but the main reason for the record vacancy rate is the surge in supply.