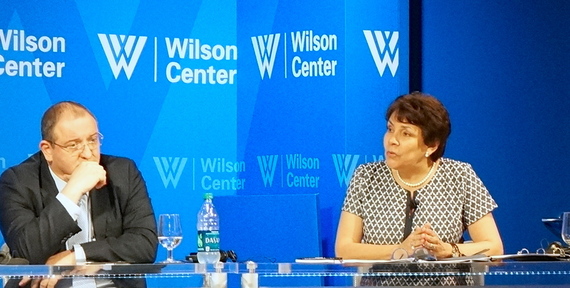 At a panel discussion at the Woodrow Wilson International Center with three Central American foreign ministers, moderator Steve Inskeep, the host of NPR's Morning Edition, began the hourlong talk with a simple question about the rise of unaccompanied minors to the United States:

Who is to blame?

Speaking to an overflow crowd in Washington, DC last Thursday morning, the three foreign ministers -- Honduras's Mireya Agüero (pictured above, right), Guatemala's Fernando Carrera (pictured above, left) and El Salvador's Hugo Martínez - shared a half-dozen or more credible reasons for the recent phenomenon, which has resulted in a wave of 57,000 minors from the three arriving in the United States since the beginning of the year.

Borders that remain too porous and governments unwilling or unable to devote more funds to secure them.

The fearsome sway of street gangs that recruit young kids into a self-perpetuating cycle of violence and illegality, leaving the three Central American countries with some of the highest homicide rates in the world.

Coyotes that, unable to persuade Mexicans to cross the border, have now turned their sights to Central Americans.

Governments that lack the resources to provide the kind of health care, education and legal institutions that could form the backbone of viable middle-class prosperity, leaving growing numbers of Central Americans looking to the United States for a better life.

Lectures from US presidents and policymakers that go unmatched with the kind of financial assistance to build truly pluralistic democratic societies.

As US president Barack Obama held an unprecedented four-way meeting with the presidents of Honduras, Guatemala and El Salvador on Friday, US policy in Central America is making more headlines than at any time since perhaps the Cold War, and it's the latest round in a polarizing debate over immigration to the United States, with the Obama administration now seeking $3.7 billion in funds from the US Congress to help stem the illegal flow of Central Americans across the border, often at great risk, especially women and children.

Obviously, like any social phenomenon, the reasons for the influx of unaccompanied minors are complex, and they involve the economics of drug trafficking, the social dynamics of poverty and urban gang violence, and a lack of opportunities for growing populations aspiring to middle-class prosperity. It's not an impossible dream because countries like Belize, Panamá and Costa Rica are largely achieving it throughout Central America.

Even more complex are the underlying conditions in the three countries that form the background to the current migration crisis, and the roots of those conditions go back decades, with plenty of U.S. interference in the region.

Conservatives rail against Obama's steps to provide a smoother path to citizenship for the children of migrants who have lived virtually their whole lives in the United States, and even Honduran president Juan Orlando Hernández last week blamed the 'ambiguity' of the U.S. immigration reform debate for the surge in child migration. Texas governor Rick Perry last month blamed the Obama administration's 'failure of diplomacy,' and has made a show of sending 1,000 National Guard troops to the Texan border. Liberals, meanwhile, argue that former U.S. president George W. Bush failed to enact comprehensive immigration reform when he had the ability to do so a decade ago.

Certainly, there's plenty of blame among both Republican and Democratic governments in the past two decades.

But so much of the current debate in the United States overlooks the background of how Central America - and especially Honduras, Guatemala and El Salvador -- came to be countries of such violence, corruption, insecurity and relative poverty. It also overlooks a significant U.S. role in the region that's often been marked by dishonorable intentions that has its roots in early 20th century American imperialism, the brutality of zero-sum Cold War realpolitik, and the insanity of a 'drug war' policy that almost every major U.S. policymaker agrees has been a failure and that, to this day, incorporates a significant U.S. military presence.

The fearsome gangs Mara Salvatrucha 13 and Barrio 18, for example, didn't emerge on the streets of San Salvador, but on the streets of Los Angeles in the 1980s. In the wake of El Salvador's unsuccessful war (the so-called Fútbol War) with Honduras in 1969, a result of Salvadoran overpopulation, the country largely turned on itself. Within a decade, El Salvador was in the throes of a brutal civil war that, like other conflicts in Central America in the 1980s, became a proxy war between US-backed conservatives and Soviet-backed socialists. Over a half-million impoverished and war-shocked Salvadorans fled to the United States. In Los Angeles and, later, in other cities, Salvadorans developed MS 13 and Barrio 18 as a way to protect themselves from more established gangs. When many of those Salvadorans returned to their home country in the 1990s, they re-imported MS 13, Barrio 18 and the culture of gang violence to San Salvador -- and then to much of the rest of Central America.

Guatemala's four decades of civil war, which crested in the 1980s with the wholesale massacre of highland Mayas, began with the CIA's overthrow in 1954 of Jacobo Árbenz, a democratically elected socialist. Though his relatively modest goals for Guatemala included land reform and wider education, U.S. president Dwight D. Eisenhower deemed Árbenz too communist for comfort, and the Dulles brothers easily dispatched the CIA to overthrow Árbenz. That so undermined Guatemalan democracy and stability that it took four decades for the country to rebalance itself upon the path of peaceful, democratic government. Though Guatemala's current president Otto Pérez Molina is a conservative and a former military leader trained during the Guatemalan civil war at the now infamous School of the Americas, he has been outspoken in his support of drug legalization and a fresh approach to regional drug policy.

Honduras, the original 'banana republic,' found successive governments of the early 20th century co-opted by U.S. corporations (and the U.S. department of state) to secure tax-free concessions, restrictions on labor freedom and development of exclusive roads and railways for banana plantations based on the Honduran coast, culminating in the 16-year rule of U.S.-backed dictator Tiburcio Carías Andino in the 1930s and 1940s. Though Honduras has held regular elections since 1981, the 1980s featured paramilitary death squads that routinely targeted dissidents, and similar right-wing forces continue to harass and murder journalists, labor activists and leftists today. In 2009, a military coup ousted leftist president Manuel Zelaya when he attempted to relax the prohibition on reelection.

Today, even though U.S. states are beginning to experiment with new approaches to drug laws, including marijuana legalization and an emphasis on treatment over incarceration, U.S. drug policy south of the border remains locked in a 1980s military-style mindset.

As Mattathias Schwartz wrote for The New Yorker earlier this year, U.S. forces may have been involved in a botched anti-drug mission off the coast of Honduras that killed four Honduran civilians in 2012. Incredibly, Lisa Kubiske, the U.S. ambassador to Honduras in the same year suggested that assets earmarked for Iraq could otherwise be deployed to Honduras for the anti-drug effort.

You might have expected this kind of militarized approach to the 'drug war' a generation ago -- if it's a scandal that U.S. policymakers are only now reconsidering the harsh incarceration regime of non-violent drug users, it's a national shame that U.S. military assets are still being deployed to perpetuate a cycle of violence throughout Latin America that clearly hasn't eradicated the illegal drug trade. Even as the target of U.S. helicopters has moved from Bolivia and Perú to Colombia to México and, now, to Central America, a tragic, unwinnable game of whack-a-mole.

Of course, U.S. foreign policy in the Cold War era, and drug-war policy of the post-Cold War era, doesn't explain away all the problems in three sovereign countries with unique histories and backgrounds. You can't place the entirety of Central America's sociopolitical crisis on the shoulders of the United States. Local elites have long exploited massive wealth disparities to perpetuate their hold over economic and political power in each of Guatemala, Honduras and El Salvador. To the extent that governments were co-opted by U.S. or Soviet influence in the 20th century, it's because local political leaders compromised their country's sovereignty for short-term advantages. Today, political leaders on both the left and the right have compromised long-term stability, democratization, broad-based economic growth, social welfare and the rule of law too often for the sake of power-grabbing and perpetuating corruption.

Even in relatively 'successful' countries like Costa Rica, corruption remains a corrosive force, and two former presidents in the past two decades have been sentenced to prison for corruption. Though former president Laura Chinchilla herself isn't under investigation, her administration was so scandal-plagued that voters turned in this spring's presidential election to a mild-mannered academic who had never before held elective office.

Central America is often overlooked, even among Latin American policymakers, and its moment at the heart of U.S. policy discussions has been long overdue. But it's important to realize there's a context of U.S. Central American policy far more complicated than most partisans admit, which belies any simple narrative that begins with the Bush era or the Obama era.

It also means there's no easy solution to the current crisis. U.S. policymakers should have spent the past two decades devoting more financial assistance to social development, instead of deploying military and security assistance that's only fueled corruption among police forces that are now often more fearsome than gangs and drug traffickers. A high-level summit and an influx of child migrants can't force a sudden reversal of decades of path determination.

Though the Obama administration is obviously working to bring a short-term end to the deluge of child migrants, it has an opportunity to reset relations with Central America on a more long-term basis by firmly shutting the book on a half-century or more of adverse U.S. policy decisions that continue to view Central America as a one-dimensional drug-war battleground and, otherwise, a source of undesirable migrants.