A couple identified as Allen and Cheryl was the latest to seek the help of Dr. Phil in dealing with an out of control child who has been terrorizing their family. Their son, nine-year-old Steve, was diagnosed with 18 mental illnesses. He was placed in three mental hospitals in the last year alone and takes multiple medications to control his behavior, but nothing helped for long.

Home cameras recorded Steve tossing his younger sister across a room like a rag doll. The couple also reported he tried to suffocate one sibling and drown another.

Steve's teachers reported that he has expressed a desire to blow up his family's home, and that he shows no empathy for others or remorse for his bad behavior.

Steve's violent outbursts and the fear of his parents for the safety of their other children mirror descriptions of adoptive parents in reports by Reuters and Dan Rather. The behaviors were the same as were the parents' fears and diagnoses of ADD, ADHAD, and a host of other behavioral maladies.

The one difference is that adopted children displaying these behaviors are labeled "defiant" and diagnosed with Oppositional Defiant Disorder (ODD) and also with Reactive Attachment Disorder (RAD), a specifically adoption-related "disorder" that pinpoints the problem as the child's inability to "bond" with a new family, and which has been called a "catch-all, garbage diagnoses."

In the case of Cheryl, Allen and Steve there was no adoption to blame. Dr. Phil and others do not approach problems such as these as the child's alone, but as a family dynamic issue which require parental training and management. There was never any suggestion of giving Steve, or any other problematic non-adopted child, to another family better suited to deal with him, or that he would be happier in a family in which he was the only child, or the youngest.

Yet that is the kind of advice parents with out-of-control adopted children seem to be given.

Stacey Conner, a 41 year-old mother and attorney from Spokane, Washington, adopted two children - a one-year-old girl and a five-year-old boy - from Haiti. The boy, identified as "J," had tantrums and displayed sibling rivalry, pinching and biting the other Conner kids.

Connor took "J" to a therapist specializing in attachment disorder. When she got pregnant again, she says:

"The therapist explained that it was too much to expect a boy who had already been through so much to be a responsible older brother, and that ideally J needed to be either the only child or the youngest in a family. 'I felt like the expert was telling me that since I had babies, it would be best to find J another home'."

The final straw came when the preschooler unintentionally caused Conner a bloody nose. Recalling that accident Conner says, "Forget love. Right then, I didn't even like [the five-year-old]." She contacted Second Chance Adoptions and placed the boy for adoption - again - keeping the girl. 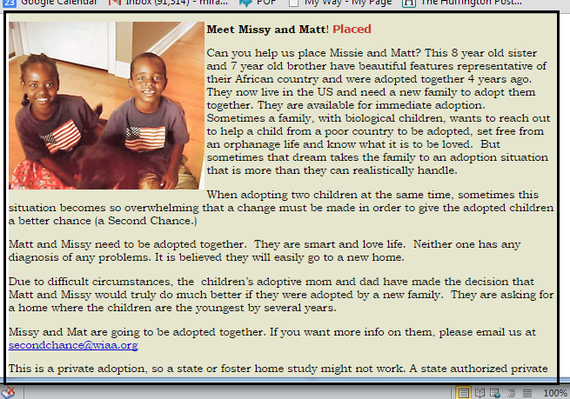 In a detailed account, Inga Wismer, 33, of New Jersey, describes her path to terminating the adoption of two children from the Congo who were reportedly 2 and 3 years old when adopted and 4-1/2 and 5-1/2 when re-homed:

"I was taking both children to a therapist; however, it did not resolve their conflict"....her daughter's therapist "diagnosed her with disinhibited form of a Reactive Attachment Disorder"... the therapist "said she needed a therapeutic family where she can get one-on-one attention, and it was certainly not my family."

Her son's "therapist said that he also had attachment issues in the inhibitive form."

According to both Conner and Wismer, therapists diagnosed their adopted children with basically being a bad match with their families, the solution for which was to abdicate responsibility for them and find another family "better suited" to their needs.

Wismer told her story to at least two different media outlets (the Daily News and LiveAction News). Many comments were critical; others came to her defense. One supporter suggested that ending an adoption was no different than a divorce - a process that involves two adults and can include financial remuneration to equalize disparities in the form of spousal support.

Conner and Wismer both felt the need to tell their stories. Cheryl likewise blogged to vent, saying she hated her son and described the physical force she felt was necessary to restrain her son. Yet, even in her darkest days of despair, Cheryl never once blogged about placing her son for adoption. And, one of the suggestions Dr. Phil made was to take down the blog and stop sharing publically.

Children can be defiant. Some throw tantrums and exhibit violent outbursts. Sometimes their problems reach a level requiring in-patient therapeutic care, as Steve's did. Children have tried to divorce their parents.

In my research, however, I have found no cases of parents other than adoptive parents giving their problem children to other families for adoption or foster care. If they do, they are not sharing it online.

On the contrary, Susan and Michael Schofield of Valencia, California, went to extremes to cope and protect their young son from their extremely violent, hallucinating, schizophrenic daughter, January. Their solution was temporarily moving into two separate apartments - one for each of their two children, with the parents taking turns, each caring for one child at a time.

Jani, as she is called, has a severe mental illness, not a behavioral diagnosis. She was not being defiant. The danger to their baby was very real and Jani could not be reasoned with or controlled. Yet they never thought of giving her away.

Re-homers like Wismer and Conner, however, find encouragement and justification for giving up on their children because "professionals" label them with RAD and suggest re-homing, treating adopted kids as disposable.

Once adoptions are finalized there are no follow-ups because adopted children are legally the same as children born into their families. Yet many who criticize those who re-home ask if they would they do the same to a child born to them. Could they?

Would a therapist recommend parents do anything similar for biological children? Could parents of troubled children born to them rid themselves of all responsibility to the children they committed to care for? Are therapists too quick to suggest re-homing adopted children, or are adopters hearing what they want to hear?

Why are adopted children pathologized for reacting appropriately to having been deprived consistent care? Internationally adopted children, who are suddenly immersed in an entirely new culture with new smells, new cuisine, and foreign language, while mourning losses of all that is familiar, are most at risk of disappointing their adopters. How does any thinking adult expect such a child to trust and show affection for those who did this to them? Why are anger, "testing," and acting out not expected behavior?

How can anyone - much less a five-year-old - in so much need of being loved be expected to give love and then be rejected for not being able to?

Another irony is that those who re-home describe the children they've given up on as violent and dangerous (though Wismer's and Conner's children were barely more than toddlers). Re-homers will oft-times say they "tried everything" though some admit disliking the child within months of the children's arrivals. They claim they did the children a favor by finding them families better suited to their needs.

If, as they insist, the children are now "thriving," does that not confirm that the fault lies with their first adopters and not with the children? Children with legitimate, recognized mental health disorders like schizophrenia would not suddenly be better by becoming the youngest in a family, as supporters of re-homing claim helps children with RAD.

Adoption is already a second chance safety net for orphans and children in need. It does not come with guarantees, a refund policy, or a legal way out of all responsibility.