I was partway through my first draft of a thriller for young adults, Latitude Zero, and my villain was about to threaten my protagonist. Then something happened that was worse than anything I could dream up for a novel: a gunman unleashed terror at Sandy Hook Elementary School, killing twenty children and six adults.

Like many people, this tragedy immobilized me. I felt powerless to stop watching the news. Some of the victims were just a year older than my son. Their faces haunted my dreams.

Gradually the relentless news let up. Real life beckoned, which in my case was the work of writing fiction. I returned to my novel. The villain backed my teen sleuth into a corner, and pulled out... 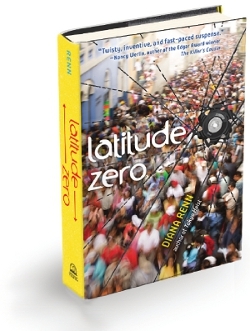 I could not put a gun in his hand.

Was I against violence or other representations of it? No. I just felt that guns were an easy reach, and that maybe we were all becoming too desensitized to them. In movies and in books, even for teen readers, guns seem as readily available as forks and spoons.

But no one was holding me at gunpoint telling me to arm my villain. Maybe I had other options.

I quickly discovered how tough it is to write a thriller with no guns. A gun is an obvious representation of power. A gun requires no words.

Unarmed, how could my villain exert his power? Shaking his fist and shouting "I'll get you!" wouldn't thrill my savvy teen readers -- and I did want them to be a little bit thrilled. This was, after all, a thriller.

My story took place partly in Ecuador. Could a villain clobber someone over the head with a pre-Columbian artifact? Hurl a spear from a jungle tribe? Run someone off a narrow mountain road? Maybe, but those gun alternatives meant contorting my plot in unnatural directions.

I thought hard about my antagonist. He was smart, with a technical background. Then I thought hard about my main character, Tessa, a media figure with a reputation to safeguard. Information could be obtained, falsified, misrepresented, disseminated. And I realized that information would be the weapon of choice for my villain. Information, based on social media and surveillance-era threats. Cyberbullying and its spin-off crimes would not work for every book, but in this thriller, in going back to character instead of relying on genre conventions, I found the perfect fit.

Still, it was hard work, avoiding that gun and maintaining high stakes. My villain had to be extremely cunning, articulate and precise in his threats. And the threats had to keep coming, keep changing, to keep the tension high. I had to build a new plot line, an added layer of complication. This layer engaged me deeply, and I knew I was on the right track, but it was exhausting work.

Just when I felt like having the villain simply reach for that gun, another real-life event hit close to home: the Boston Marathon Bombing and the subsequent manhunt for a suspected bomber -- a teenager, really -- took place just a mile away from my house. As the search helicopters droned above me that day, I thought again about why I wanted to take extra care with how I portrayed guns, or any violence, in my books. There is nothing casual about guns or the people who wield them with malevolent intent. I choose to take guns seriously, in real life and in fiction.

I am not against guns in all novels for young readers. Books can be a safe place to explore important issues of violence and power. But I believe writers of fiction for younger readers have an added responsibility to handle the guns with care. We should be clear in our minds about why characters might reach for a gun in any given scene, and to look for creative alternatives when possible. We should avoid throwing guns around for quick plot fixes, or because we think readers expect guns in thrillers.