This is my fifteenth Father's Day without my dad.

He died of heart failure four days before St. Patrick's Day, a couple of months shy of his 79th birthday, and after a year of hospice care. He took his last breath quite peacefully while I sat by his bedside with my mother and Seamus, my parents' big, fluffy, orange and white cat. I was stunned by how clear it was that my father's spirit had left his body. Only his earthly container remained. A shell of him lay still and quiet and cool on the bed ... but he was gone. And so was a family history I'd neglected to plumb. 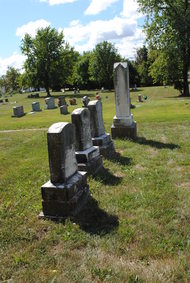 Some people seem to be supernaturally connected to loved ones who've gone on to the great beyond. Not so for me. Oh, I can imagine what my father might say or think about something, what movies he'd like to see, or what books he'd be reading if he were still here. And I've wondered how much he might know about our earthly lives here without him. There are things I hope he doesn't know and others I wish he did.

I wish he could have seen my daughter play point guard on her AAU basketball team and hear her play the guitar and sing songs she's written herself. I wish he -- a Fordham man -- had seen my son graduate from another fine Jesuit institution ... and I wish he'd seen that same grandson get married last year. I wish he'd lived to see the election of an African-American president...

But had he lived even six more months, he'd have been heartbroken by 9/11, not only because he was a pacifist, but because he was a native New Yorker, born and bred on the island of Manhattan.

I'm glad he didn't see the towers fall and I wonder if it's true what the book of Revelation says about heaven ... Will God wipe every tear from their eyes? Will there really be no more death or mourning or crying or pain...? I rationalize that if heaven is all it's cracked up to be, with everyone eternally happy, then my father has not been aware of things that might cause him grief -- not terrorist attacks, his daughter's missteps, a grandchild's illness, or my mother's debilitation from dementia.

What I wonder about more than any of this, though, is why I didn't query my father about his younger self when I had the opportunity. I was a reporter, trained to ask questions ... yet I didn't.

It's possible that that my father constructed unspoken and invisible barriers around his own family-of-origin issues, and that on some deep, mystic level I was discouraged from going there. But it's also true that I was wrapped up in childrearing and marriage and work and church committees and friends. I hadn't yet developed an interest in the past beyond my own girlhood experiences. 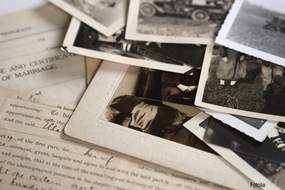 But now, I crave knowledge of earlier generations, and the dribs and drabs I've unearthed through census returns, ships' manifests and other public records are like crack. I get a hit; I want more.

My grandfather eloped, leaving Northern Ireland for New York City in 1905. He'd lost his first wife and three children -- two infants and a 14-year-old son -- by the time my dad came along, his fourth and youngest child with wife number two.

And there are dead ends...

I've yet to find evidence of my grandfather beyond 1942 when he filed a WWII draft registration card. He was 55-years-old and working for the Otis Elevator Co.

I don't know how he died or when ... And there's nobody left to ask.

My dad told a lot of stories, but precious few about his childhood. I know he once stole a Charlotte Russe from the neighborhood bakery, running home lightning fast to avoid being caught ... that on wash days his mother made rice pudding ... and that he once hid under the kitchen table to avoid a whipping from his father -- my only memory of my dad ever mentioning his own.

How bad was it? Was your father an angry drunk? Is that why you never spoke of him? Was he bitter with grief from losing a wife and three children? How often was he out of work? What did he tell you of his own father? Or of his childhood in County Tyrone? How did he treat your mother? How did they meet? How and when did your father die and where is he buried? Did you have a favorite childhood meal? Or were you simply lucky for anything on the days there was enough to eat? Why did you enter the monastery at a time when others were joining the service? Did your mother pressure you into it? And how did she feel when you left religious life after 16 years? Why did you and Mom move so far away from your families?

There are years worth of questions. You might want to start asking them, even if you think you're not interested, because one day, it's likely you will find yourself trying to fill in the blanks to gain a greater understanding of those who came before. And if you wait too long like I did, it'll be too late.

So, if your parents -- or grandparents, aunt and uncles -- are still alive and compos mentis, and you haven't already done so, consider asking the questions. The secrets, stories and experiences carried from one generation to the next give us historical and personal context that goes far beyond why we have blue eyes or red hair or the Kelleher nose.

And while we're at it, we might begin to ponder the stories we want to tell to our children, grandchildren, nieces and nephews. Because ancestry.com is great ... but it's no substitute for a tale told with your uncle's impish grin, your grandmother's brogue, or a tear in your father's eye.