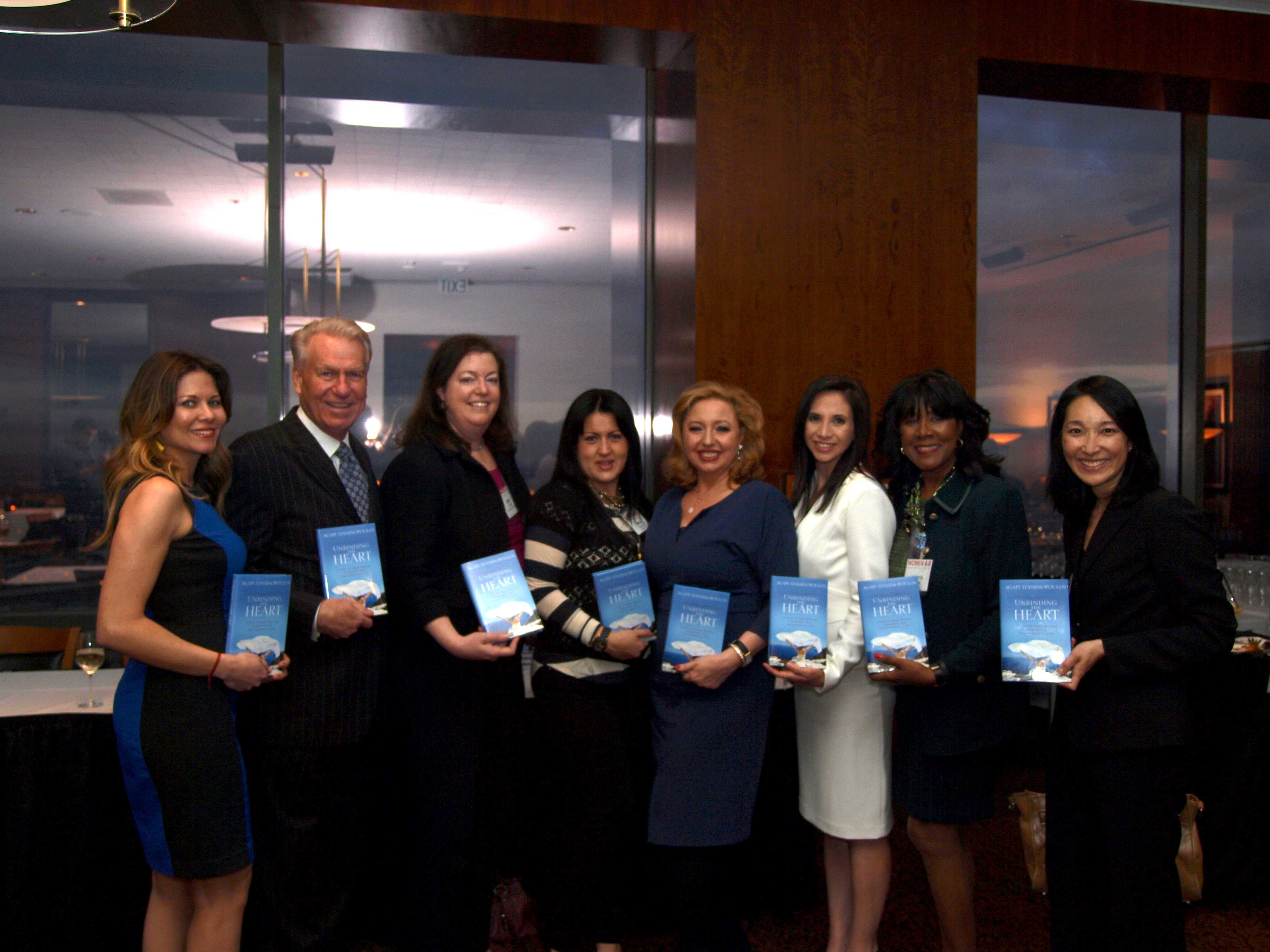 So she entered, her Greek heritage following her, carrying within the entourage of her family, her sister, Arianna Huffington, her mother, a courageous mentor and light, her father, his history also unwinding in the presentation. She played a little Greek music before her speech to bring festivity and joy to the evening presentation at Women 6.0 at City Club, a beautiful oasis with a panoramic view on the 54th floor in downtown Los Angeles. Brave enough, added to the mix, a few men came, intrigued by the author and her subject matter.

Agapi Stassinopoulos wrote a new book, Unbinding the Heart, which truly brings transformational storytelling to the stage. Each chapter unwinds and unbinds her story. It's fascinating to many to see where these two amazing women came from their Greek background, the entering into the world stage, their influences.

Many do not know that their lives were not given to them on a golden platter, that their mother, Ellie, her teachings a running theme in the book, was a courageous woman with a history that strengthened her ability and will to seek the best and give the best to her daughters.

Start with one of the chapter titles, an Ellie-ism, "There's Always a Solution," whose thread kept going when the going was rough. As Agapi stated in regards to telling her own story, the telling was a way of honoring, claiming and unbinding the history and finding freedom in it.

"Yes, it did hurt to write it." Going back to her beginnings touched on the pain in the stories and also allowed her to reclaim the teachings of her mother that assisted her in making sense out of it all, reaching into the inner greatness of all that she has become. As a result of listening to these true tales that Agapi Stassinopoulos presents when she is speaking, inevitably more than one person is moved to tears and thanks the author at the end for opening her heart.

Greatness does not mean fame and fortune. The authoress found in her story that her vision of becoming an actress may just mean one great moment, eye-to-eye with someone on a bus, reciting a monologue that moved a woman to tears. This experience, on the bus, was more powerful than a moment on stage. She asked, "How did I find Agapi's voice? How did I let go of what I thought I was supposed to be and find my way?"

She lived through disappointment, and her mother responded with no comparisons. Instead of emphasizing her low grade in math (and her sister's "A"), she responded with congratulations on a job well-done anyway. A disclaimer was proclaimed that math was not what she was supposed to do in life anyway. Ellie's great contribution was a perceptive awareness that we all have different talents. To carry disappointment over a grade, to stop there, would only deny the true talents of her daughters. This is a beautiful example of total acceptance, trust and support. This wise woman looked to truly see her children and was behind them 100%.

The support of her children did not stop there. If one acting school was good, she would ask everyone on how to get her child to the best. If the acting teacher, said Agapi could not act, Ellie had the perspective that teacher just didn't see her, and knew that she was not the right fit. Momma Ellie would find her the teacher that would "get her" and know how to work with her to bring out her talents. And so it was.

Little is known of Ellie Stassinopoulos who stood up against the Nazis with machine guns in a Red Cross location, telling them to put their guns down, while hiding Jews. Or her husband-to-be, who was in a concentration camp after running an underground newspaper supporting the resistance.

Many look at this family and assume that persona, strength, fortitude, wealth was just given. It takes a village to bring many of us. Maybe in this family, it took an Ellie.

Agapi, standing at the podium, trained as an actress and already twice a published author, has a presence and ability to transmit feeling, truth and authenticity. She made the comment that in Chinese culture, they have bound the feet of young girls, but in Western culture, our hearts are bound. Who will dare to truthfully express who am I, where did I came from and who am I becoming from a place of honesty beyond the titles, the accolades, the profession?

As Ellie would say, "Don't miss the moment." Her moment was anytime, anywhere, with the cook, the taxi driver, the maid, sometimes ignoring the prime minister at an private party, to sit down and connect with the next person. She had no hierarchy, as her daughter said, and would disarm people with her honesty and authenticity. Come next generation, Agapi Stassinopoulos, who in her own way stood in the room at the City Club with a widely diverse audience to bare herself, her history, give a bit of the truth in her family line, to allow each person to feel safe enough to unbind their heart.

The book, Unbinding the Heart, is as exciting as a novel and reads as anything but a preachy message. It's a very real set of stories, true to her life, that Agapi shares through message and meaning. The Ellie-isms could take us all far. Her "teachings" are simple and poignant, moving the reader to forge forward in life to places where they have not yet reached.

Agapi left us with five wise statements from the lips of her mother, "There's always a solution"; "If something is not working, change the channel"; "Life is about offering. If you offer unconditional loving, it will come back to you"; "Always help someone else lift"; "Always ask for what you want."

Maybe by telling our stories, the greater understanding will unfold and the human connection will increase. It is when we are without understanding that we judge one another. Once a true story is told, a bond is made and compassion is exchanged. Unbinding the Heart touches people, exposing truths we all share, encouraging others to share their own stories in order to move forward in life with vitality, honesty and freedom unbound.