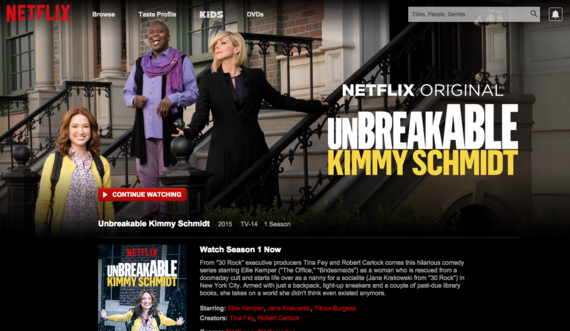 [SPOILER ALERT: This has details from Unbreakable, Kimmy Schmidt. If you are not done watching, beware!]

In the new hit Netflix comedy, Unbreakable Kimmy Schmidt, the show stars an ambitious Kimmy(Ellie Kemper) who plays the title role, a "mole woman" who was rescued from an underground bomb shelter. With a plot that drags her into the heart of New York City, her roommates Titus(Tituss Burgess) and Lillian(Carol Kane) are feasibly one of the best parts of the show, all of the characters harmoniously playing out their stereotypes in an intelligent mimic on-screen.

The show, which debuted in March partially takes place in Indiana, a state currently under heat for the recent signing of a so-called "Religious Freedom" bill, which allows any business to humiliate anyone who does not coincide with their according religious beliefs. While the characteristics of Kimmy speak volumes about the regular conceptions of Indiana, the end of the series results in an Indiana trial with the crooked preacher (Jon Hamm) that abducted her. The court scenes really highlight the shallow political values that are motivating the current laws popping up all over the country.

The show plays on Indiana's homophobia with a closeted character named Brandon in the third episode, who offers his girlfriend the "Traditional Meat and Flowers of Indiana courtship." This analogy is a clear jab at the "meat and potatoes" ideology that Indiana is carrying on with this anti-gay bill Gov. Mike Pence signed. With so many positive gay roles in the show, it is clear that the show's creators are behind the movement with the message of the show alone. No matter who you are, where you come from, or what you do in life, there is always hope waiting around the corner if you open your mind.

While the program has been criticized for its representations of race and mental illness, it offers a format of satire that takes every tired trope to the next level and brings it to life with over the top antics that somehow leave it feeling oddly genuine. So it seemed to me, Emmy-award winning creators Tina Fey and Robert Carlock were a step ahead of Indiana's homophobia before it even made itself clear with the newly passed legislation. So with new quasi-progressive content like Unbreakable, Netflix highlights the larger than life comedy with heavy influence from its cousin program, 30 Rock. The missing link, Jacqueline (Jane Krakowski) plays a ritzy upper class Native American housewife, whose character that "passes" as "white" resembles her prior role. This storyline also received a lot of heat in the press, but despite backlash, Unbreakable steps onward with the streaming giant behind their team. The show will expect a second season as two seasons were originally ordered by Netflix when they purchased the comedy from NBC last year.