At dinner last night, my good friend Bruce Buffer was telling me that he had Jean Claude Van Damme, the "muscles from Brussels" on his Podcast. The podcast, aptly named "It's Time" is a labor of love that Bruce Buffer, the "Voice Of The Octagon" hosts each week. The show, which is on BruceBuffer.com is also syndicated by Fox Sports, Itunes, etc. I hope to someday be on the show as a guest myself. Cool thing about this podcast is that it has video of the interview too! 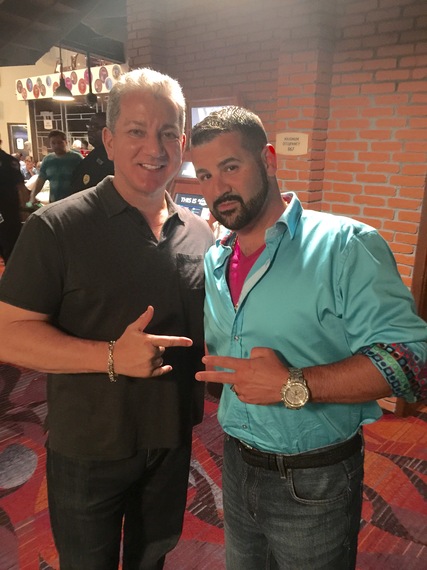 As Buffer and I maneuvered for the last escargot at Council Oak Restaurant, at the Hollywood Hard Rock, the eve of UFC Fight Night taking place June 27, 2015, he explained to me, Jean Claude is not known to do in depth interviews like the one he gave for It's Time Podcast. As we discussed the show, Miccosukee Tribe of Indians' Secretary Osceola and I showed a spread of fresh oysters how we 'ground and pound' the seafood in South Florida!

Bruce's face lit up with pride and it was clear how honored he was to have this opportunity. Bruce said Van Damme displayed a side of himself that he hadn't previously seen, making the interview a fascinating introspective into JCVD. It is one of Buffer's favorite shows and he has over 200 in the books! I listened this morning and as somebody who grew up loving Van Damme's movies, especially Universal Soldier with Bill Goldberg, I have to say, it's a must listen!

Once our Seabass and risotto were gone, we headed outside where "The Mind of Rey Rey", my photographer and videographer filmed a special video with Mr. Osceola, Mr. Buffer and I which I will be sharing very soon....