Angry frustration is boiling over in the city where NGOs and developing countries see no deal in sight.

An earlier version of this article is cross posted on The Tyee, "B.C.'s Home for News, Culture and Solutions." 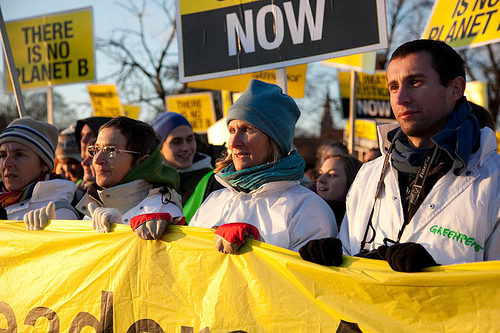 The already sharp concern among non-governmental organizations (NGOs) about the pace and process surrounding the United Nations Climate Conference in Copenhagen grew more urgent yesterday, with only two days remaining until the conference's official conclusion.

Journalists rose from their computers and ran for the exits of the official media centre to follow a loud protest march in the main hallway of Bella Centre, the conference venue.

Led by indigenous conference participants, approximately 100 protesters chanted, "Join the people's assembly," an apparent reference to the restrictions on democratic process they complain may be subverting the potential of the landmark conference to achieve the goal of drastic CO2 emissions reductions that could help to prevent runaway climate change.

Protesters led NGOs and journalists outside the centre to gather with an estimated 4,000 protesters, according to the Guardian.

According to a protester who requested his name be withheld, this large central protest was organized by Climate Camp, a global activist group motivated by the example of suffragettes who campaigned for women's voting rights in the United Kingdom in the late 19th and early 20th century.

"Thousands of people gathered to protest knowing it was probable we'd have our hands tied behind our backs for hours, shit ourselves, and be placed in cages," said the unnamed protester.

'Talks are in crisis'

Yet the growing impatience in Copenhagen may also be a predictable outcome of talks that remain at a standstill.

Insufficient planning may also have contributed to conference woes.

Non-governmental organizations have seen access to the U.N. Climate Conference severely restricted as the conference has unfolded in part because the conference venue has a capacity of 15,000 -- a number three times too small to accommodate the 45,000 registered participants.

In yesterday's afternoon plenary, dissatisfaction and frustration amongst developing nations and the Least Developing Countries group (LDCs) emerged during what appeared to be a breakdown in the official negotiations, and seemed to mirror the impatience of NGOs.

"The talks are in crisis and we are very concerned at the direction they are taking," said David Turnbull, director of Climate Action Network, an NGO that represents 500 organizations.

"After nearly two weeks of volatile and pretty acrimonious negotiation," he said, "two years of work look like they're still up in the air, unresolved with less than two days to go.

"This is beyond negotiators and beyond ministers to resolve and we are strongly hoping this will now be taken to the political level by heads of state where it needs to be resolved politically."

The phrase, which suggests both non-violence and rebellion, may have provoked anxiety among security officials here. Nevertheless, the attempt to recast Gandhian non-violence signals among some campaigners an intense desire to influence nation states and to prevent intensifying suffering caused by the cumulative toll of industrialization, ecological degradation, and climate change.

Avaaz and Friends of the Earth, significant members of the TckTckTck campaign for "bold climate action," didn't participate in the protests, which is why they were shocked today to be officially "de-badged" by the United Nations. Nevertheless, they continue to demand that governments of the world agree to limit greenhouse gas emissions and atmospheric concentrations of carbon dioxide.

Inside the plenary to conspicuous rounds of applause, Venezuelan President Hugo Chavez cited protesters' signs in his plenary address, referring to the diplomatic positions of developed countries at these talks.

And: "If the climate were a bank, they'd already have saved it."

"We look to the future with great apprehension," he said. "What distinguishes the LDC group is the very limited capability to adapt to this situation. LDC group realizes that climate change is not compatible with sustainable development."

Senegalese President Adboulaye Wade commented on the negotiation process and indicated displeasure with a history of broken promises from developed nations in meeting both financial commitments and greenhouse gas emissions targets.

He said that developed countries had a "promise strategy" that was "designed to make us forget previous promises." At the same time this strategy was being played out, he added, "Lake Chad is growing smaller and smaller" and the "Congo forest has been massacred by European operators."

Journalists here who haven't yet grown dismayed by the process here in Copenhagen are stewing in a vortex of anger and frustration among the parties that are most cognizant of, or most affected by, climatic breakdown. As journalists, we're in the privileged position of bearing witness to the largely polite indignation expressed by NGOs held at bay from the conference center, the humiliation and anger of protesters struck brutally by Danish police batons, and the impatience of deadlocked governments that don't seem to be able to find the political will to successfully conclude the highly anticipated climate negotiations.

Today's developments don't bode well for civil society's meaningful contribution to resolving some of the thornier issues of the treaty negotiation process, including climate mitigation, adaptation and migration.

"It's fucked," says Jade Lindgaard, a reporter for Mediapart, an online news magazine based in France. "It makes me more than sad, it makes me angry."