You might go to someone's party and check out the host's book or music collection. If you're a little more curious, you might see what the hell's up in their medicine cabinet. I'm talking pills - analgesics, soporifics, psychotropics. Don't read the labels, examine the capsules' designs. Little Mondrians and Van Doesburgs, some butterscotch yellow or lime green monochromes. Innocuous, not a little pretty, right, like really minimal, hand painted, Minimalist sculptures? Well, especially if they're psychotropics, not that pretty. As with a painting's backstory, you have no idea of the context, the particulars of the condition for which these pills were prescribed. Often it's harrowing, if not downright grim. 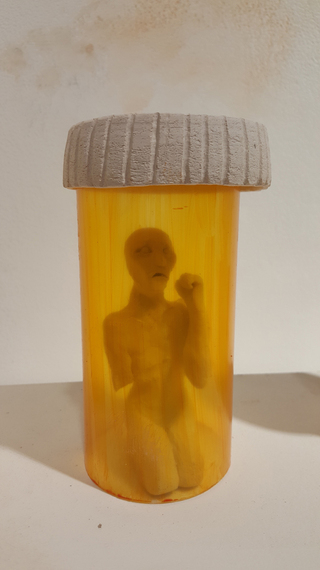 Brittany Waters' EXPOSED: Don't Let Them See the Damage, gives you that context. She makes you feel the emotional stakes for people that suffer from mental illness. It's timely (no matter how you look at it, we're an overprescribed nation) and timeless (how can we alleviate pain that doesn't have a physical cause?). The show reverberates because it makes us feel these stakes, to feel and care for those afflicted, even if we don't suffer from any such affliction ourselves. 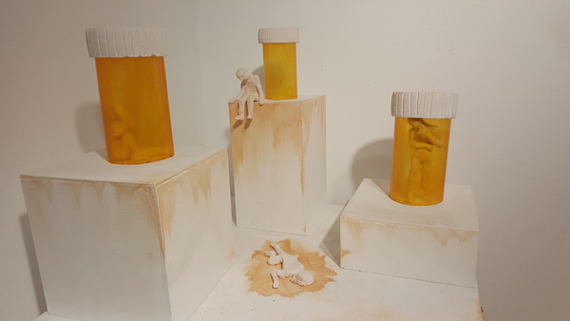 The setting floors you. The works are placed in a raw, claustrophobic room, like some long-abandoned Dust Bowl Depression-era asylum. You enter through a gauntlet of horizontal spikes so that, no matter what your pre-entrance frame of mind might have been, you don't enter unscathed. All this before you enter the gallery. When you leave, you know that you've been touched, like, really touched. 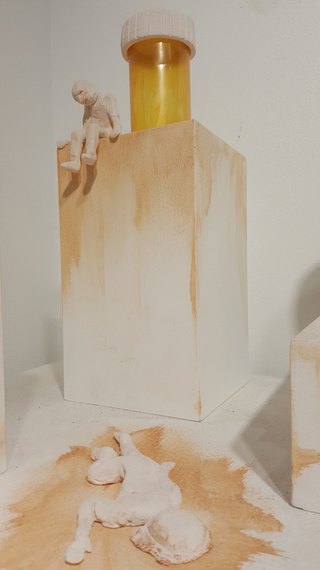 One of the installations, the most touching, Prescribed Suffering, consists of eight medicine bottles, each colored that antiseptic orange, each covered with a ceramic lid made by the artist. Inside each bottle live nude, featureless, and anodyne clay figures that make you think of Edvard Munch's The Scream cast as an entropic sculpture. Their poses are contorted but their agony is passive. Though each figure's pain is obvious, it feels medicated and numb, under control but to what end? Part of an architecture of despair, each bottle sits on uneven pedestals so each figure feels compartmentalized and isolated, which appears to be the show's dominant state of mind, that is, the diagnosis the medication seeks to cure. 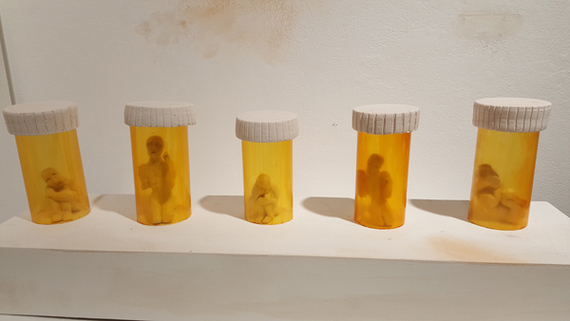 The show raises more questions than it answers, the most prominent being What to do? It's this not knowing that drives the show, even if the narrative is one of drugged indifference. The show raises issues of contraindication, whether medication should even be used to treat mental disease; but at what cost, both emotionally and financially? Though the bottles are cylindrical and platonically perfect, the pills they house hardly solves the problems they set out to solve, which is why, metaphorically, the figures are shown to have become the medicine they ingest.

The figures don't fight their condition. They can't - they're too medicated. It's that passive struggle, which really isn't a struggle at all - that's the most moving part of the show. Writing of love, though he could just as easily have been writing about this exhibition, John Keats described it as being "awake forever in a sweet unrest."