In 1989, my first book The Dark Side of Adoption was published. That same year I organized a speak-out at the Lincoln Memorial in Washington DC at the culmination of a walk of adoptees and mothers who had lost children to adoption that began in New York City. Also, that year, at the AAC national conference in NYC, I organized a "red tape" event that garnered media attention to the issue of adoptees being denied access to their birth certificates. I ended the year as invited speaker at an AAC Region 3 conference. The title of my talk was "In the 'Best Interest' of All: Equal Rights for Adopted-Separated Persons" telling those in attendance to stop asking for "open records," which was the battle cry of adoption reformists since the 1940s, and to frame their argument as one of equal rights. 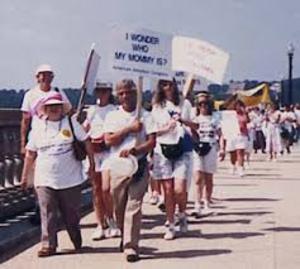 In 2009, I spoke again at an AAC conference on "Reexamining Goals: Open Records versus Equal Access," because the phrase had still not fully taken hold by then, despite my having penned several articles on the subject in between. It is thus fair to say, I have been on the cutting edge of this movement for adoptee equal rights from its second-wave inception. I and others have since written about it as a civil and human rights issue.

Today, equality is the cornerstone of adoption reform work in the area of access to accurate and original birth certificates, compelling me to respond to Adam Pertman's recent Huffington Post blog, "Beyond Kentucky: Equality for All Should Include Adopted People, Too."

The title of Pertman's piece is great. Equality most definitely SHOULD include adopted people! Currently, only eighteen of fifty U.S. states allow adoptees access to their own original birth certificates. All other states discriminate against adopted persons in this regard, relegating them to second-class citizenry. Of the 18 states that do allow some type of access, eleven have limitations or restrictions that non-adopted people are not subjected to.

Pertman's article begins right on track, comparing the Adoptee Rights movement to other campaigns for equality and justice, such as women's suffrage, civil rights for African Americans, rights for people with disabilities, and for same-sex couples (all valid comparisons that Pertman has made before). 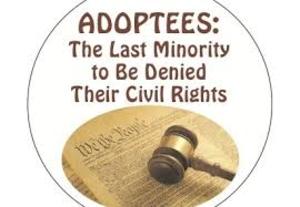 "There are lots of reasons that adopted people want the same documents, containing the same information that the rest of us take for granted... At the bottom line, however, those are not the reasons it should matter to everyone that adopted people, on reaching the age of majority, cannot automatically obtain their own original birth certificates like the rest of us. We should care, and we should feel outraged, for the same reason so many men supported suffrage for women and so many white Americans joined the civil rights struggle - because we should find it offensive when any minority group in society is deprived of equal rights."

He then goes on to counter the opposition to adoptee rights as based on falsehoods, stating: "Research in the field refutes or calls into serious question every one of those claims" that seek to prevent adoptees from having their own, authentic, original birth certificates.

Then, inexplicably, after refuting all the opposition, Pertman capitulates, saying:

"...we should do all we can for [birth parents]...giving women who placed their children for adoption the ability to officially declare if they do not want to be contacted."

This a shocking and disappointing suggestion coming from someone who knows full well that relinquishing mothers were never promised confidentiality from their own children, nor could that have been in light of the fact that not every relinquishment results in an adoption which triggers a child's birth certificate to be sealed. Some children remain in foster care with their birth certificates never sealed. Thus no promises of confidentiality could be made to their mothers at the time they signed away their parental rights voluntarily (or had them terminated involuntarily by the state). Pertman knows this.

More importantly, Pertman is well aware of the fact that a right to one's legal documents, one's vital records, is a totally separate issue from contact and reunion, which may or may not follow., Social media has been a huge boost to reuniting adoption-separated families allowing contact and reunions to occur in large numbers without regaining access to one's original, unamended birth certificate. The choice of families to experience reunification should thus not be convoluted with one's right to what is rightfully theirs and should remain a personal choice, without any government interference, as are all other interactions between two adults.

A contact preference option seems to be innocuous, inasmuch as the adoptee still receives his, or her, original birth certificate. Any restriction, however, that applies only to adopted persons, and not all citizens of the state, creates a less-than-equal situation and is, thus, contradictory to the suggested intent of Pertman's argument.

Restrictions that apply unequally to citizens who were adopted imply that adoptees are a suspect class of people because of something that occurred TO them when most were babies or young children. This is not fair, just, or equitable. There are sufficient laws to protect ALL citizens equally from being stalked or harassed. To create special laws that apply only to adoptees is a violation of the 14th amendment and treats them as second-class citizens.

It is equally as likely that any parent - without anything to do with adoption - might not want to be contacted by an adult child for any number of reasons. There are surely parent/adult child relationships which have deteriorated to the point of necessitating Orders of Protection being issued to one, or both, parties. Yet parents of non-adopted children - even if their offspring is a convicted felon - do not get to put a restriction on that adult having access to his, or her, birth certificate, nor do they get to complete a contact-preference form or contact veto. Ironically, only parents who have (voluntarily or involuntarily) relinquished all of their parental rights to children who were subsequently adopted are being given such control over the lives of their adult children.

As Mr. Pertman knows well - and stated in his blog post - that in states which granted some degree of access, there has been no "calamitous fallout." In fact, in states which have granted access, there has not been a single reported case of an individual stalking or harassing any members of his or her family. All one has to do is say "NO" to a request for contact, which under all other circumstances is the personal choice between two adults without any pre-intervention by the law.

Also known to Pertman are the stats from states, such as Maine and New Hampshire, which indicate that less than 1% of parents exercised the option to have no contact, making such restrictions on the law a lot of work - and costly - for states to "protect" such a minuscule minority.

Activists for adoptee rights know well the difficult process of getting a bill passed. In New Jersey it took activists 34 years! State legislators are pressured by lobbyists for adoption practitioners and for Right-to-Life to oppose unrestricted adoptee access and to maintain secrecy in adoption practice. Lawmakers (who are, after all, politicians), feel compelled to compromise in order to appease their voting base.

Why, however, would one who is calling for equality suggest a compromise? What kind of advocate yields to their opposition's false claims, giving up ground without a fight? Those who truly speak for the rights of adult adoptees, with no other agenda, know that their job is to start by demanding unfettered, unqualified equality and to educate the lawmakers against compromising those rights. Denied adoptees themselves, their kin who put the adoptee's rights first, and their grass-roots organizations work tirelessly to do just that.

Only organizations (such as the American Adoption Congress), individuals (such as Adam Pertman), and adoption practitioners with an agenda to keep adoptive parents and prospective adopters as paid customers for their adoption services and publications, etc., or as donors to their non-profits, would suggest a starting point that capitulates and compromises adoptee rights.

All who claim to advocates for equal treatment of adopted persons need to take a hard line on the restoration of equal rights, rather than muddying the issue with the alleged rights of others to privacy or secret keeping protections which never existed in the first place. Whether or not an individual has interest in search or reunion, they have every right to their original, unchanged birth certificate in order to verify their actual date, and place, of birth (which is often falsified when their "amended" replacement certificates are issued).

Equal civil and human rights cannot be compromised! Equal is not equal when it contains any caveat, no more than "separate but equal" is equal.

CORRECTION: An earlier version incorrectly stated that Pertman was suggesting a contact veto, when in fact it is a contact preference.