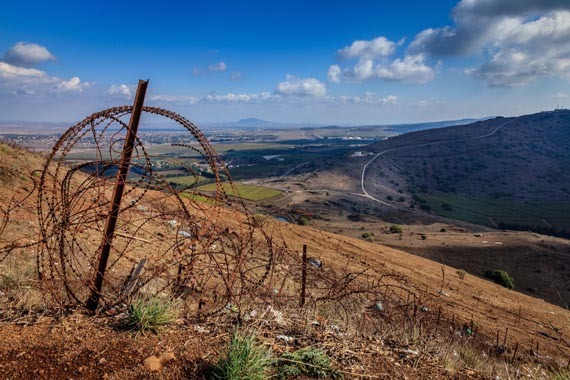 So frightened, so helpless, and with few to no options. The political struggles in the Middle East blind us to the human cost of this endless conflict. It reaches into the depths of human despair and suffering, and is sometimes met with the deepest compassion and hope on the other side.

The Syrian civil war has invaded the lives of women and children, sons and fathers, daughters and sisters. Hospitals have been decimated. There is no medication. Little food. And, while Doctors without Borders and other humanitarian organizations want to help, it is almost impossible. The Red Cross is not allowed inside Syria. Gunfire is erratic, uncontrolled and continuous.

With no other options, Syrian mothers and fathers take their wounded children to the Israeli border. They know that if they are ever caught or anyone finds out that they even spoke to an Israeli, it would be considered treason and they would be put to death. Their whole family would die.

But, nonetheless, they carry their children to the border.

On the other side, Israeli soldiers, nurses, physicians and ambulances wait. It has become almost a ritual to care for these wounded innocents. There are no politics here. There are no differences here. There is only humanity in need meeting humanity with hope.

Two years ago, an 11-year-old boy was brought to the Syrian-Israeli border by his mother. He had lost a leg and had been blinded -- a casualty of war. No one spoke Arabic. But, the boy was transferred to an ambulance and to an Israeli doctor. Now he was in a foreign country. His parents knew they could not come into Israel. Only their injured son could.

The emergency team immediately went to work to save this boy's life. They could not save his eyes.

Once stabilized, the boy became the focus of care for the Israeli nursing and medical team. They found an Arabic translator. Clothing and toys were donated. The staff grew to care for him as one of their own. They provided food that was familiar to him. Over time, their strange voices and language became comforting to him.

The Arabic translator was constantly by the boy's side. She read to him, talked to him, and explained what was going on. It was difficult, but after some weeks, the boy began to recover. Therapists worked with him, never forgetting how frightening the whole situation was for the boy. Once his amputated leg healed, the boy was fitted with a prosthetic, which was also donated. He underwent physical therapy until he acclimated and adjusted well enough to kick a soccer ball.

They all agreed that the boy had to go back to his own family and home. The challenge, of course, was to return him as invisibly as he had come -- without anyone seeing him or knowing who had treated him.

With care and concern, they returned the boy, with his new prosthetic leg and bandaged eyes to the border and to his mother.

This boy's story is not unique. Because every day, wounded Syrians come to the Israeli border, trusting that they will get help. What is both moving and so natural for the Israeli healthcare team is that the best care -- the same as any Israeli citizen would receive, is provided to these wounded victims of war. And, to take care of this young boy is to remember that so many of them have their own young boys.

Kindness and compassion are unconditional among healthcare workers - wherever they are in the world.

The ethics that drive physicians and nurses are neither culturally nor politically based. They are universal. Israeli nurses and physicians care for patients without knowing who they are, and without concern for anything but "their patients."

This story about the wounded Syrian boy was told in Aqaba, Jordan, at the Second Annual Conference of Middle Eastern Nurses Partnering in Human Caring, sponsored by the Watson Caring Science Institute. For the past four years, nurses from over 10 middle eastern countries have met to learn how to take care of each other's patients, to sharing their skills and practices, and to build relationships and sustain trust in human caring.

At the conference, there is no war, no conflict -- nothing but caring for each others' patients and sympathizing with each other for those who are at risk and who die. These nurses are also parents and have families that at any time can be the victims of war.

From the time of Florence Nightingale, nurses have cared for those wounded in war unconditionally, regardless of political, ethnic, or racial identification. Today, this ethic of caring continues in the Middle East, where Israeli and Palestinian nurses transcend the conflict within the boundaries of hospitals to provide compassionate care for all. Once their patients go back to Syria, the nurses and physicians continue to worry about them, as they do not know where these patients are and cannot follow up.

And so, the war continues. But so does the caring.